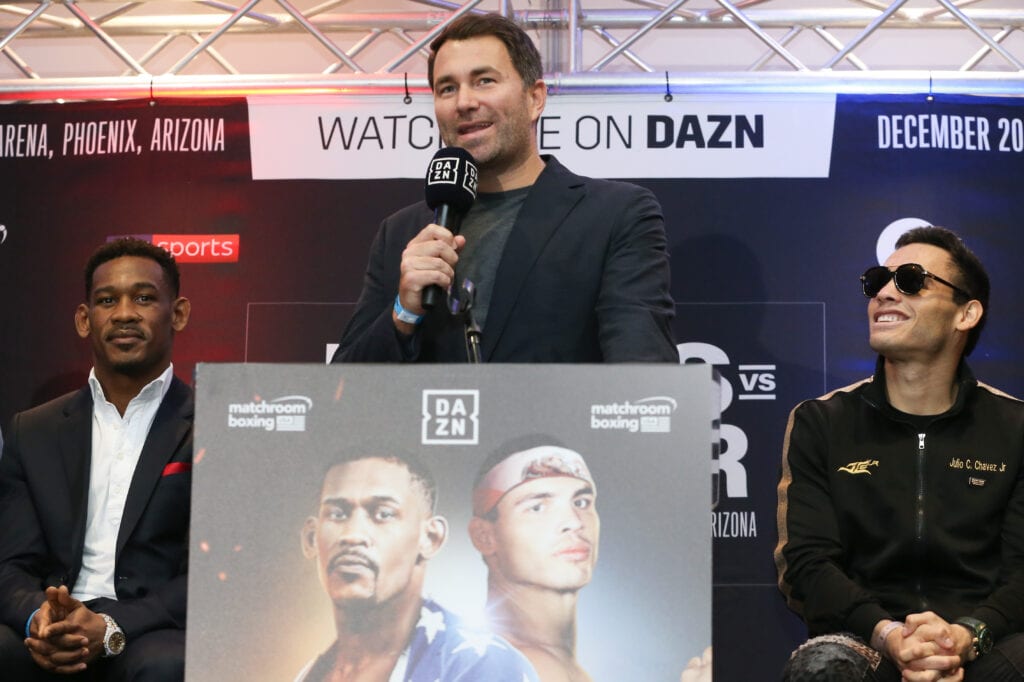 Hearn on COVID-19: “impact on every business, particularly boxing”

Matchroom Boxing promoter Eddie Hearn speaking about boxing and the future of fighters in it sees a scenario that more than likely will have less of them in the foreseeable future.

Speaking on the latest “BBC Radio 5 Live Boxing Podcast”, Hearn sees as the longer this goes, the lasting effects it would have on the sport.

“The coronavirus is going to have a massive impact on every business, particularly boxing,” Hearn told the BBC Radio 5 Live Boxing podcast.

“If this drags on to September, October, November, December we will have fighters that have not boxed this year. The fighters at the top end are going to be fine, but the fighters coming through, small hall fighters, ones starting their careers or those who do not have a sponsorship deal face big concerns,” Hearn stated.

It was always going to be an interesting chat when @EddieHearn went on IG live with @bjsaunders_ and a horse ?

This concern not only affects future boxers but everyone in different walks in life who were starting up and not being able to due to the COVID-19 pandemic. Hearn stated that he doesn’t want to see it happen, but it’s going to be the grim reality as events are being canceled or pushed back at an alarming rate.

“We do not want people to leave the sport. We want the more fighters, the better,” Hearn said. “But look at the Olympics, these people have grafted for four years to achieve their dream and fight in Tokyo. There’s no chance of these Olympics taking place, so what are they going to do? Everything is going to be a complete reshuffle of every sport.

That no chance became official late Monday as USA Today reported from International Olympic Committee member Dick Pound stated that it would be postponed because of the pandemic likely until 2021.

“On the basis of the information the IOC has, postponement has been decided,” Pound said. “The parameters going forward have not been determined, but the Games are not going to start on July 24, that much to USA Today I know.”

The reshuffling and canceling of live sporting events continue as the world waits on the pandemic to clear up.