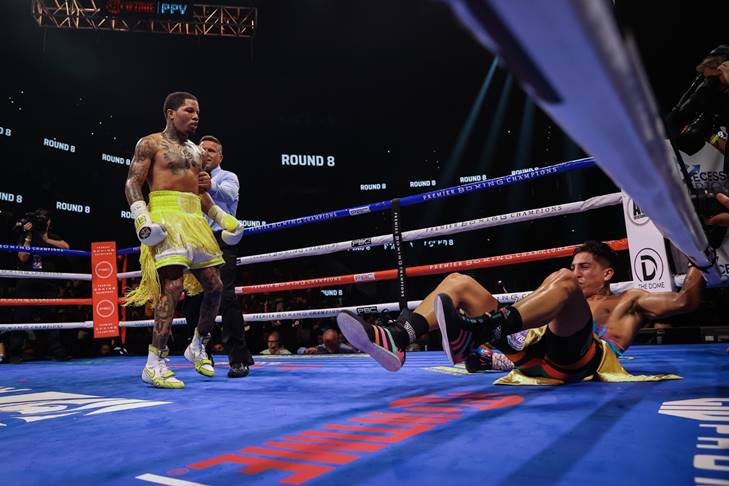 It was a battle Saturday night in Atlanta, but once again Gervonta Davis rose to the occasion, out-slugging a bigger fighter with a longer reach, as he stopped Mario Barrios with an 11th round TKO. And, he captured a lesser version of the WBA Junior welterweight World Championship in the process.

After struggling to get inside of Barrios’ reach in the early part of the fight, the unbeaten two division World Champion Davis stepped up the attack and eventually, scored two knockdowns in the eighth round.

.@Gervontaa is a PROBLEM. Tank remains undefeated and becomes a 3-division world champ with a vicious body shot.#DavisBarrios pic.twitter.com/IbFSqeuSF7

The first came from an overhand right, which dropped Barrios along the ropes. He got up on shaky legs and Davis eventually landed a booming left to the face and Barrios was quickly down again with more than a minute and a half remaining in the round.

To the Texan’s credit, he not only survived but actually threw punches back at the shorter Davis, who was swinging wildly and seemed to almost punch himself out at the end of the round eight.

“I made it tough. I could’ve made it easier, but it is what it is. I went up in two weight classes and I got the job done,” Davis said post fight to Showtime in the ring.

“I knew if I could catch him, I know for sure I’d crack him. When I caught him, it showed.”

The win improves Davis to 25-0, 24 KOs and once again, displayed his star power on a big stage as more than 14,000 fans were in attendance at the State Farm Arena downtown Atlanta. Even though he was handed a WBA belt for beating Barrios, Scotland’s Josh Taylor owns the WBA’s “Super” title at 140 lb.

Barrios dropped to 26-1, but should be given credit. This, because he not only took Davis’ best for a lot of the fight, but he was standing with him and firing back after being knocked down for the first times of his entire career.

Barrios won the second and the fourth rounds on the BFW card, with the size and the straight right hand being his biggest assets. Still, Davis at only 5′ 5 1/2″ was able to find the range in the fifth and sixth rounds on our tally and got control of the bout.

And, the story is Davis, who delivered big time in an action packed fight. Davis was non-committal after the fight about whether he would stay at Jr. Welterweight or move back down to 135 lb., where he kayoed Leo Santa Cruz last October.