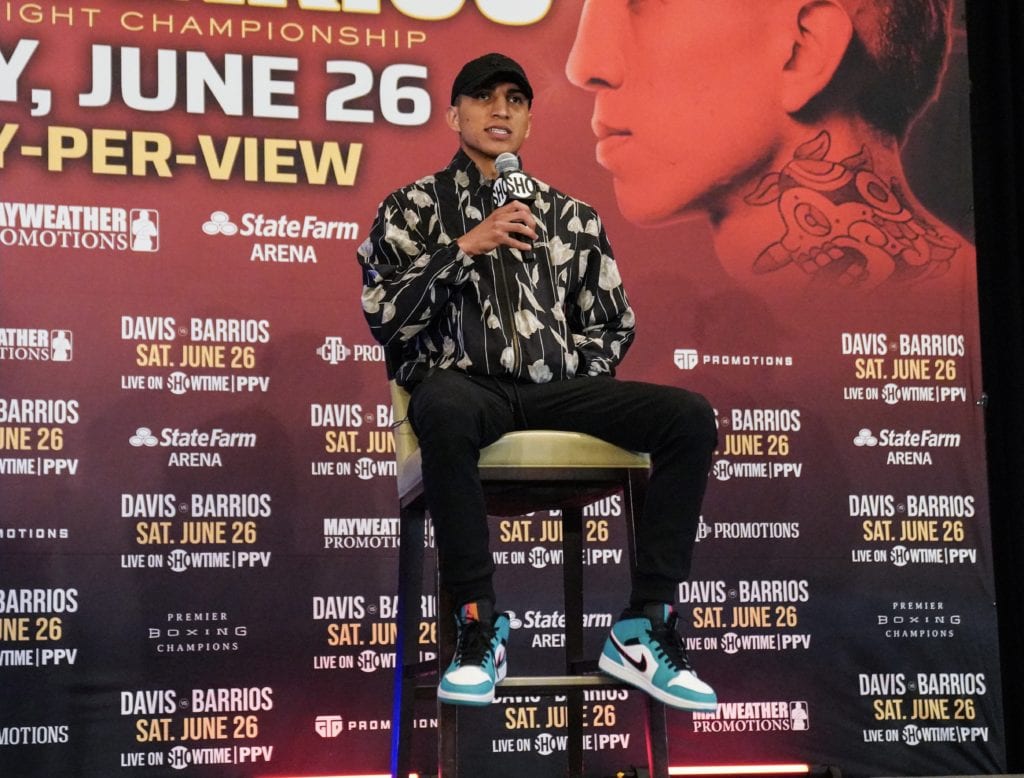 Say this for WBA “regular” Jr. Welterweight Champ, Mario Barrios, he was definitely delivering the press conference “heat” Thursday prior to his PPV battle with Gerovonta Davis in Atlanta Saturday night.

Anytime I’m in the ring I throw with bad intentions. – @Boxer_Barrios

“I have all of the tools and I have the size to present a lot of difficulties to Tank, and that’s what I plan on doing,” said Barrios.

“Tank Davis is going to learn what it’s like to be in there with the type of fighter that I am. Buy your tickets and order the pay-per-view. I know he’s ready and we had a great camp in the Bay Area. We’re both coming with it on Saturday….

“Like Leonard Ellerbe said, they have big plans for him. I fully intend on f***ing up those plans come Saturday.”

Again, tough talk from the rangy, 5’10” Jr. Welterweight, but he also knows that Davis is having to move up two weight classes (and give up about 4 inches) to fight him.

Hear our discussion of the Davis-Barrios showdown on the Big Fight Weekend Podcast, as Marquis Johns, Ryan O’Hara of RingTV.com and I discussed it more. Click below to hear it.

The WBA now has four different categories of “champions” in their divisions and they designated Barrios the “World champ” after his 6th round KO win over Ryan Karl on the Davis- Leo Santa Cruz undercard last October. Scotland’s Josh Taylor holds all four “World” “Super” Franchise”, etc. titles in the Jr. Welterweight division.

Meanwhile, Davis, 24 – 0 with 23 KOs, is one of the top names in the lower weight classes in the sport and his October devastating, one punch KO of former multi-division world champ, Santa Cruz was arguably the punch and KO of the year for 2020.

For his part, Davis fired back Thursday,

“I think he (Barrios) is making a mistake. It’s not just the height. He thinks he’s stronger than me, so we are just going to have to wait and see. If he believes that I’ve never seen anyone like him, then so be it. But they always learn on fight night. That’s when the real me comes out.”

It certainly came out with the left uppercut bomb on Santa Cruz.

“It’s going to surprise him when I connect. It’s not only that I hit hard, but its where I place my punches and he will see that Saturday night.”

Davis is also a draw at the box office, where it’s believed that more than 14,000 will be in attendance at State Farm Arena in downtown Atlanta Saturday night. Davis would love the shot at Taylor and the Undisputed titles down the road.

And, another thing Davis is known for is controversy and legal troubles outside of the ring. This includes charges that he’s still facing from an alleged November felony hit and run, car accident in Baltimore that left four people in the other vehicle injured.

Davis has a scheduled October 4th court date to face the dozen counts against him.

This is also the fourth different time that Davis has faced charges, including a domestic abuse incident caught on video in the Miami area at Super Bowl weekend in February 2020. It’s not clear what the status of his multiple charges are for that alleged assault? Davis avoided jail time, received probation and paid restitution to the victim for assault charges in a 2019 incident in a Virginia shopping mall.

So, all of that is the backdrop and now, we see if Barrios can present real trouble for Davis or if his words on Thursday were the best we’ll see of him.