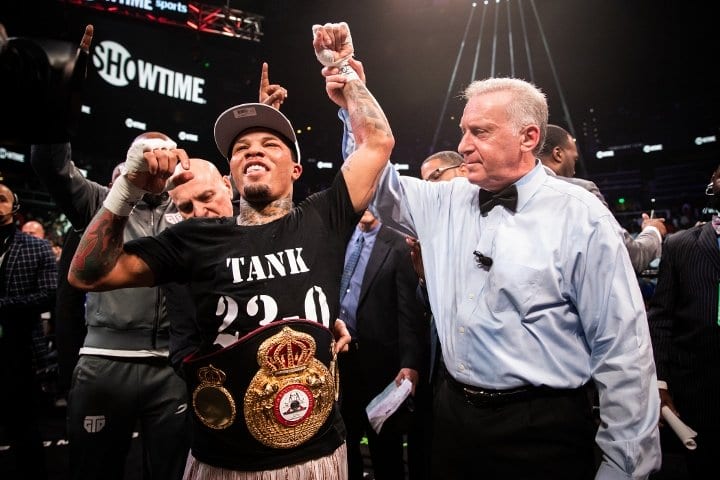 A viral video of WBA Lightweight champion Gervonta Davis that surfaced this weekend, involving him putting his hands on his ex-girlfriend at a charity basketball game while at the Super Bowl, has now resulted in Davis’s arrest.

TMZ had the details first, including Davis’ mugshot, as he turned himself in to Coral Gables, FL police Tuesday afternoon. The incident took place Saturday evening involving Davis and his ex-girlfriend at a charity basketball game the nigh before Super Bowl LIV:

In the video, the Baltimore native Davis can be seen approaching the female and grabbing her around her throat area while raising her out of a chair. Then, he stalker her back out of the main arena and public view with members of his entourage following him.

Davis, who just won the WBA “interim “belt with a 12-round TKO in December against Yuriorkis Gamboa in Atlanta, is an unbeaten (23-0) rising star in boxing. It was his 15th consecutive KO or stoppage, in his first fight at 135 lb. He had vacated his WBA 130 lb. belt to move up and fight Gamboa.

However, despite all the boxing talent, Davis  is no stranger to trouble outside of the ring and being arrested.

This includes, an incident in February of 2019, when Davis was taken into custody after an altercation with another man at a Virginia shopping mall. Davis ended up paying restitution to the alleged victim and avoiding jail time in that case, which was resolved in October. Davis has also been arrested two previous times before that on assault charges.

Davis is promoted by Floyd Mayweather and his promotional arm, in addition to Premier Boxing Champions. And, they want him to become a pay-per-view star in the coming months. That includes a possible humongous pay day with Unified Lightweight Champ, Vasyily Lomachenko.

However, incidents like these that continue to happen are only going to hinder his image and marketability for mega-fights.

Conlan, Mayer in action on St. Patrick’s Day
Brook-‘2020 I want to be two-time champion’
Advertisement