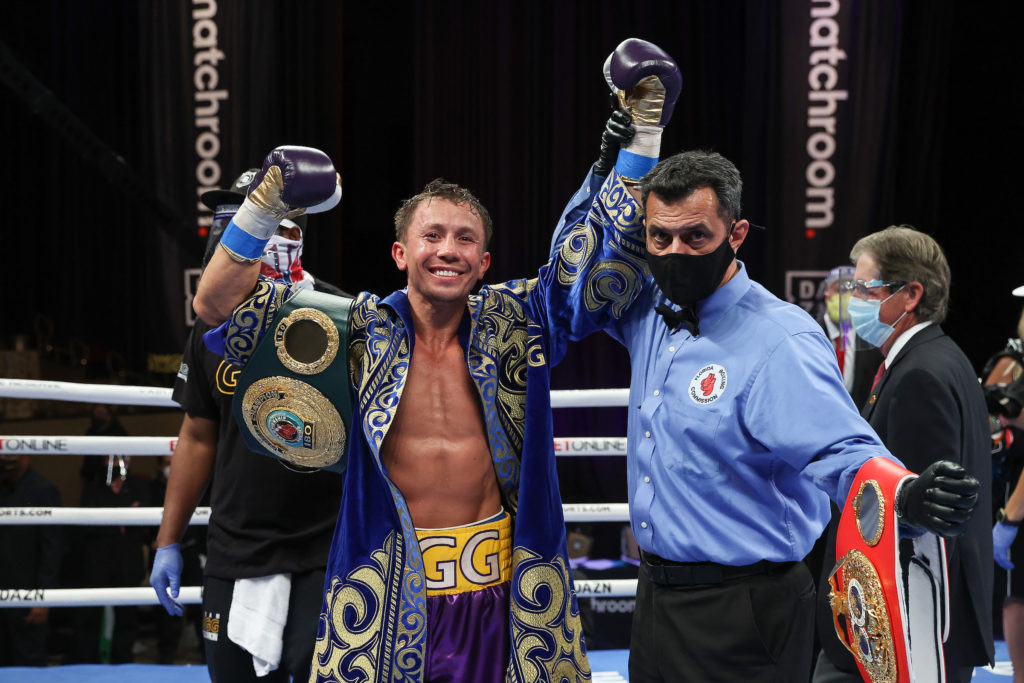 On Friday IBF World Middleweight Champ Gennady Golovkin turned 40 years of age, but he saved any birthday food, dessert etc. for after he made weight in Japan for unification showdown with WBA champ Ryota Murata Saturday night.

Both Golovkin and the Japanese star hit the Middleweight limit of 160 lb. on Friday afternoon Tokyo time in anticipation of their delayed 12 round battle taking place at the Saitama Super Arena in Saitama about 30 km north of downtown Tokyo.

Golovkin tweeted this video of the weigh-in from Japan,

As we wrote earlier this week, the title fight that was delayed from December due to rising Covid 19 cases and Japanese officials restricting in-person attendance for the live gate, will now happen in front of a capacity crowd. And, it will have millions more watching on PPV in Japan with even more seeing it around the world on DAZN streaming, including in the U.S. early Saturday.

Triple G is 41-1-1 and is the former, dominant, three belt, Unified Middleweight champ of the 2010s and he knows his clock is ticking on getting back on the biggest stages with this bout and another looming.

This after he lost his versions of the Middleweight crown on a tight decision to Canelo Alvarez in September 2018, he has a chance to get back in front of the fellow future Hall of Famer Alvarez later this year, too.

Golovkin celebrated (as much as he could the night before the bout in Japan) his 40th birthday with some treats, etc. Although, it’s not likely he partook in much of what you see in these social media photos,

Canelo has committed to fight GGG in the Fall, likely September and likely in Las Vegas. That’s provided that they both are victorious in their upcoming bouts (Alvarez fights Russian Dimitry Bivol on May 7th).

Back to Murata, he’s 16-2 as a pro, and won the WBA “regular” Middleweight belt with a second round KO of American Rob Brandt in Osaka, Japan, in July in 2019. He was then elevated to their “world” champ and defended the title again by KO over lightly regarded Canadian Steven Butler in late December 2019 in Yokohama, Japan.

Murata, who just just turned 36 in January, hasn’t fought since, a layoff now of some 27 months.

So, there are plenty of questions about fighter age, ring rust for both and whom will hurt whom first on Saturday in Japan. And, clearly, Golokin has much more to lose, if it doesn’t work out for him in the ring.