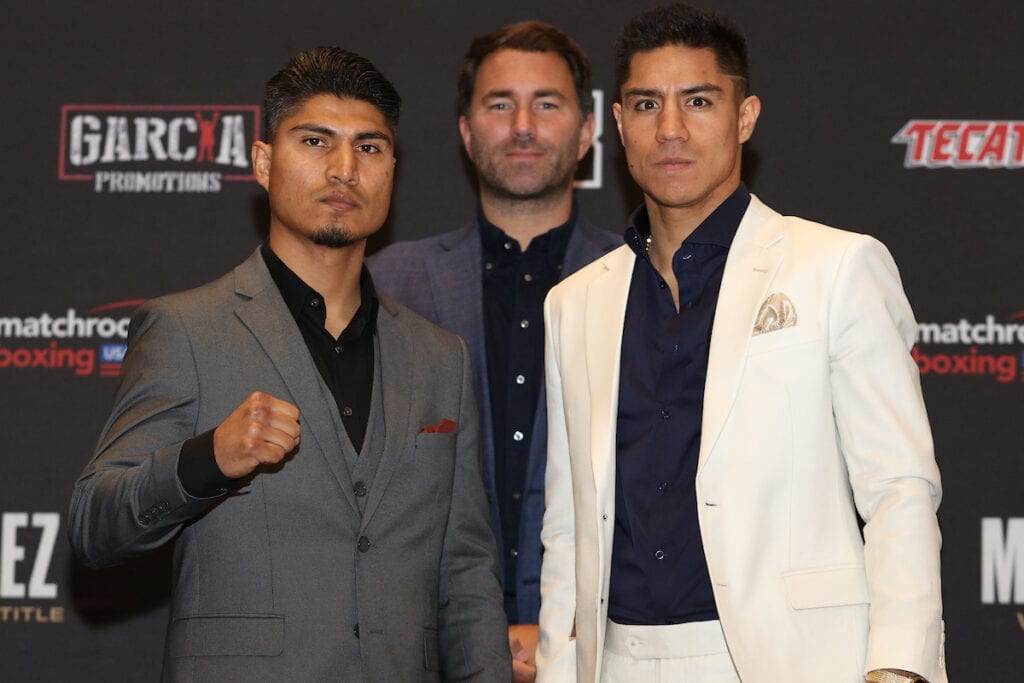 In anticipation for the welterweight blockbuster event headlined by four-division World champion Mikey Garcia against two-division World champion Jessie Vargas, the fighters addressed the media in a press conference to discuss their preparation and predictions before entering the ring on Saturday night at Ford Center at The Star in Frisco, Texas – live on DAZN in the US and on Sky Sports in the UK.

Here is what they said at the press conference Wednesday

"I'm here to take over and show everybody that there is a lot more to Mikey Garcia.

"I will prove to everybody that I can be a serious contender at welterweight."

“Pleasure to be here ahead of a monstrous night of boxing. We have one of the best nights of boxing we have ever put on from top and bottom. So many great fights, championship fights, and an incredible main event in Garcia vs. Vargas.

“The heavyweight division is so good and it’s great to have Joseph Parker back. He’s ranked number two in the WBO, has a tough opponent in Shawndell Winters, and I look forward to a massive 2020 to regain a world title. We have one of my favorite fighters in Martinez – he’s an animal. I think he can be a Mexican legend in the sport. The co-main event we have Khalid and Gonzalez – talk about great fighters. Gonzalez is a legend in the sport of boxing. I can’t believe I’ll get to see him live in person. If Roman can win another title it would be historic.

“The main event is breathtaking. As we get closer I could see this being an absolute war, a Mexican war. These two are a credit to the sport, and this is such an incredible fight. This is going to be a fantastic night, and a great night of boxing.”

Can Mikey Garcia score an impressive win that he needs for leverage Saturday night? We discuss on the Big Fight Weekend preview podcast here:

“This is my first time working together with DAZN and it’s been great. This is a tremendous card, a stacked card with world championship fights. I’m here to do one thing and take over the show – there’s a lot more to Mikey Garcia. I’m going to display all my skills and be a contender in the welterweight division. We landed on Vargas because he’s a two-weight champion, solid career, big size, and has height. He’s everything that people have been telling me I shouldn’t be fighting, but I’m going to do everything I can to win this fight. I expect the best Jessie Vargas and that will allow to me display all my skills. I don’t want easy fights. This will be a great matchup because Jessie is a warrior. It will push me to get the best out of me.

“Jessie is a great person, but inside the ring we’re competitors. He’s coming to knock me out, and I’m trying to doing the same, but that will make it a memorable night. Tune-in to DAZN, it’s going to be fireworks all night long. We’re going to finish it off with bang, Jessie and myself. There’s a lot more to Mikey Garcia.”

“We have a big night ahead of us against Garcia. I’m very much prepared. I trained very hard the last two months. It’s the best training camp I’ve had to date. I know what’s ahead of me and I know the opportunity in front of me. I trained my ass off for two months, following the game plan. I’ve never looked this good in the ring. I’m feeling good, I know Mikey is a good fighter. The moment the bell rings it’s fight time. I plan on giving a fantastic performance so you acknowledge that I’m the best in the division. This isn’t an easy fight but either way I’m coming to win. I’ve done my homework. Mikey is a good fighter and I’ve looked into some of his past fights.

“I’m happy to be part of this event. Come early to this fight, tune-in to DAZN for a great night of action-packed fights. We’re going to finish it off with a bang.”

“I look up to Roman, so it’s going to be hard to fight him. I’m in the best shape, no stone unturned. I’ll give it everything I can. Looking forward to a massive fight on Saturday night. Don’t blink it will be a huge fight.”

“I’m in the best condition for this fight. I will take advantage of this opportunity. There’s not a small person in this fight, everyone is very good. I come with a blessing that I will win. Thank you and hope this sport of boxing will be a spectacle for everyone.”

“I’m very excited for Saturday, and going put up a fight. We’re going to win.”

“I’m here to win and I’m going to pull off a massive upset on Saturday. It’s going be a hell of a fight. Tune-in on Saturday.”

“Great to be here in Texas. Last time I fought was June 2019, so very excited to fight this weekend. I worked hard in camp, a lot of running, sparring. I’m not taking this fight for granite. Looking forward to a great performance. On Saturday, I’m going to take care of business. Thank you to Winters for taking the fight and looking forward to the challenge.”

“I’m not supposed to be here, but I’m glad to be here. I didn’t come to here to take pictures with Parker. It’s very nice for you all to meet me – that’s a joke! I’m coming to fight, I’m coming to win, this is my opportunity. Thank you to Parker for this opportunity. I’m confident and look forward to Saturday night.”