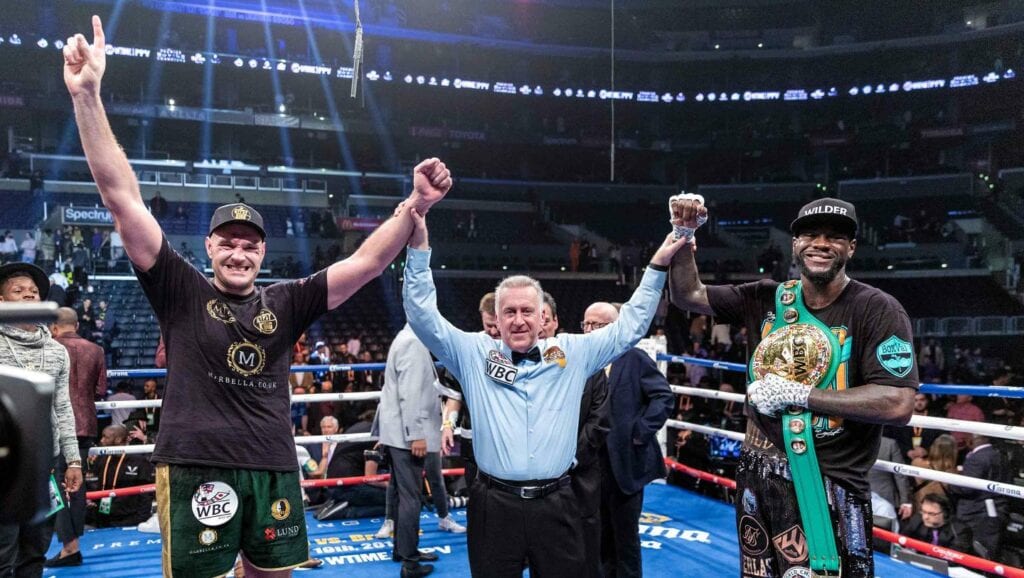 Fury to Wilder- “Stop using my name for relevance”

British heavyweight Contender Tyson Fury is done, for now, with his WWE wrestling, and on Wednesday morning decided to turn his sights back on WBC Heavyweight Champion, Deontay Wilder.

In a social media post, the former Undisputed champ wanted to make clear the Wilder should worry more about his upcoming November 23rd rematch with Louis Ortiz in Las Vegas, than about the talking about him and the proposed Fury rematch slated for February:

“This is a message to address Deontay Wilder’s recent comments on how I don’t want to fight him or I’m afraid of him. If I was afraid of you, I wouldn’t have fought you after three years out of the ring. And, beat you in your home country. You had to rob me and gimme a draw,” Fury said.

“So, I don’t know why on earth you would think that I am bothered about you. Just get through your fight with Ortiz. Do your own thing. Stop using my name for relevance…. ‘Crack On’ with your own business and I’ll see you February 22nd to finish what I started.”

Obviously, there still is some intrigue with the proposed Wilder-Fury fight. However, as he mentions, it’s predicated on Wilder defeating Ortiz for the second time coming at the end of the month.

There has also been some speculation that Wilder and Premier Boxing Champions, his promoter, would offer Fury significant money to step aside from the February 22nd proposed rematch date. This would particularly be, if PBC fighter Andy Ruiz, who currently is the Unified Heavyweight Champion, were to defeat Anthony Joshua in their rematch December 7th in Saudi Arabia.

Then it would be natural to have the two PBC fighters meet next year.

For now, Fury has been participating in World Wrestling Entertainment, including their pay-per-view which was also in Saudi Arabia last week. There, Fury wrestled 300+ pound bad guy Braun Strowman in a one-on-one match.

It’s unclear whether Fury will continue being part of WWE promotions, but he had said in multiple interviews that he will not be wrestling again prior to the proposed Wilder rematch in February.

For now, we are left to see the outcome of Wilder-Ortiz II and if the rhetoric from Fury heats up more.

Saunders willing to move up to face Canelo
Shields on hand for York Hall show Saturday
Advertisement
To Top
We use cookies to ensure that we give you the best experience on our website. If you continue to use this site we will assume that you are happy with it.Ok