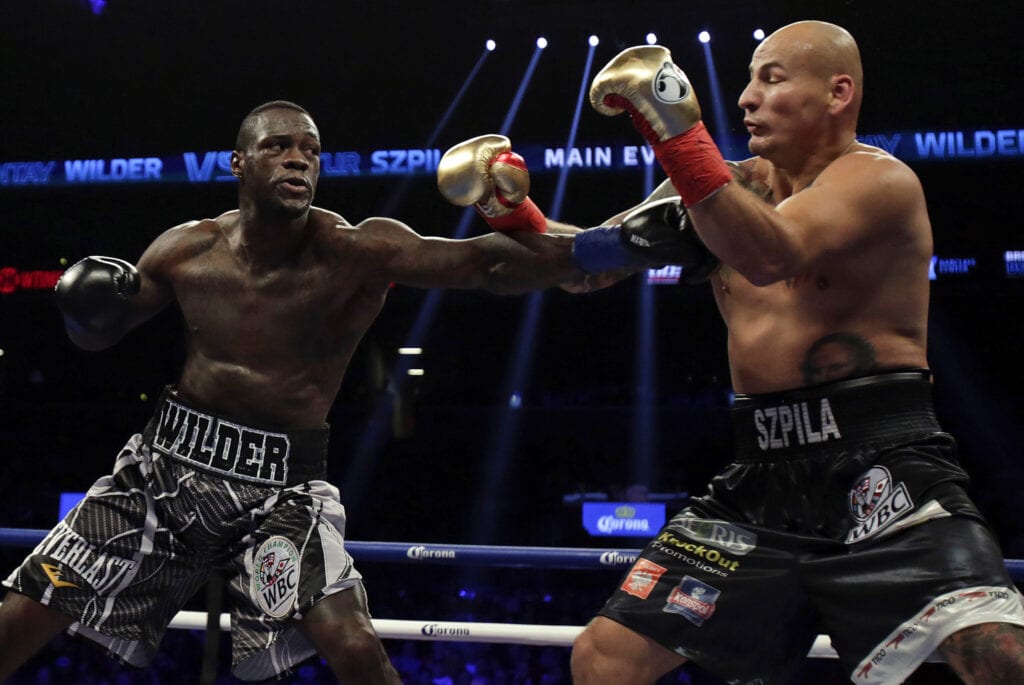 (Here’s a great commentary from David Payne, a.k.a. “The Boxing Writer” from England, who is also a frequent contributor on the Big Fight Weekend Podcast, about how Deontay Wilder, Tyson Fury and Anthony Joshua are simply following the normal routine of avoiding risk, as much as they can. This item originally appeared on David’s site, www.boxingwriter.co.uk)

Coincidences can prove jarring, awakening us from the mundanity of our rituals, sometimes they’re not evident without the spectacles of hindsight and occasionally the happenchance of concurrent events or unexpected meetings of people, things, occurrences pass by unnoticed.

Just such serendipity brought together two different eras in the heavyweight division for me today and in doing so offered a salve to my throbbing suspicion that Tyson Fury’s alignment with Top Rank and ESPN will steal away a heavyweight era barely rediscovered beneath a layer of Ukrainian dust.

Via the medium of podcasts, firstly, Steve Bunce’s Yahoo sponsored history of the heavyweight division, which he begins in 1960 and, latterly, through his BBC commissioned conversation with Mike Costello, in which Fury’s surprise announcement was the focal point, there were conspicuous echoes both backward and forward in time.

By joining forces with ESPN, the preeminent sport’s broadcaster in America and Bob Arum’s Top Rank promotional company for whom Spartacus or Samson could’ve been early clients, Fury’s career has assumed a new personality.

Previously, he was the willing gambler, prepared to take challenger’s wages to snag an opportunity to recapture his place at the division’s ‘top table’, he is now resplendent in an Emperor’s marquee of his own, with a luxurious dominion over which to preside.

The fear among fans is this ensuing wealth, and the wise counsel of Warren and Arum, will reduce the fighting man we fell in love with, he of the refreshing honesty and roguish sound byte, to the same benign diplomacy of those he once pursued.

There is something different in his voice and words already. A polish where once there was post-rehab honesty and a deference to the expertise of others acting on his behalf where previously the solitude of retaining control and purpose, to prove his readiness to the doubters, was preeminent.

Now fully risen from the canvas he found himself on, both in life and the 12th round of his December fight with Deontay Wilder (above), he has the gait and connections of the champion, if not the belts and decorations of one.

The consolation in this evolving narrative I spoke of is flimsy I confess. It offers no foreshadowing of the desired outcome; that mess’s Fury, Joshua and Wilder will contest the crown Fury abdicated, beneath a fatty duvet of depression and gluttony, in 2016.

They should, if this were a boxing Utopia as opposed to the real world, contest a series of bouts that would raise all of their reputations, potentially at least, to the exalted levels of their predecessors in the 1970s. Instead, the consolation can only partially soothe the irritation the empire building of TV Networks is presumed to cause, by reminding fight fans that heavyweight inertia and the avoidance of the most obvious challengers is an age old problem. It isn’t new. And boxing was never as good or as simple as nostalgia will insist it once was.

In fact, the golden era of Muhammad Ali, Joe Frazier, George Foreman and Kenny Norton is an anomaly. Even in the generation that followed, whether it be the lost slew of 80s heavyweights scythed down by drugs, promoters and other nefarious distractions, or the glorious quartet of Bowe, Tyson, Lewis and Holyfield, the fights we needed didn’t materialize as they should have. They were either too few or too late.

Those stories are much told, less well known is the extent to which Floyd Patterson, a talented if enigmatic fighter, was protected during his reign as heavyweight champion in the late fifties and early sixties.

Steve Bunce’s series trawls the archives to reveal the influence his manager Cus D’Amato was able to exert over the challengers his man would face, or more pointedly, those that he wouldn’t.

Steve begins his multi-part podcast in 1960, I’ve listened to the first three in the time since Fury’s announcement, and it sets the scene for the events of that year by exploring, in summary introduction, the reign of Patterson.

A fighter blighted first by an inherent vulnerability and complex sense of himself and perhaps by the realisation, in retrospect at least, that by being protected he diminished himself and distorted the capabilities of his would be challengers, most notably Charles ‘Sonny’ Liston, to such a degree that he’d lost before ever he climbed the steps to meet him.

One of four capable men Floyd circumnavigated for the duration of his reign; Liston, Williams, Machen and Folley, fought each other frequently and Liston got the better of all three of his contemporaries in 1960 alone, and still the title fight wasn’t forthcoming.

Champions with experienced advisors avoid risk until the reward is consummate with the undertaking or all alternatives have been exhausted. From 1958 to 1962, Liston remained stubbornly uninvited whilst less qualified, less worthy cannon-fodder, Ingemar Johansson notwithstanding, were fed to the fast fists of Patterson.

His eventual and conclusive denouement at the hands of the rampaging Sonny in 1962 proved an overdue exclamation mark to a period in which the title was inactive and largely disabused in Patterson’s name.

There is an argument he fought, and in some instances beat, better men having lost the title to Liston in 1962 then ever he did as champion.

One hopes the multiple champions of today, each with their own television channel or platform, will not, at some distant point, be haunted in the way Floyd Patterson was.

Regret can gnaw through the millions long after the last bell of a career’s has rung.