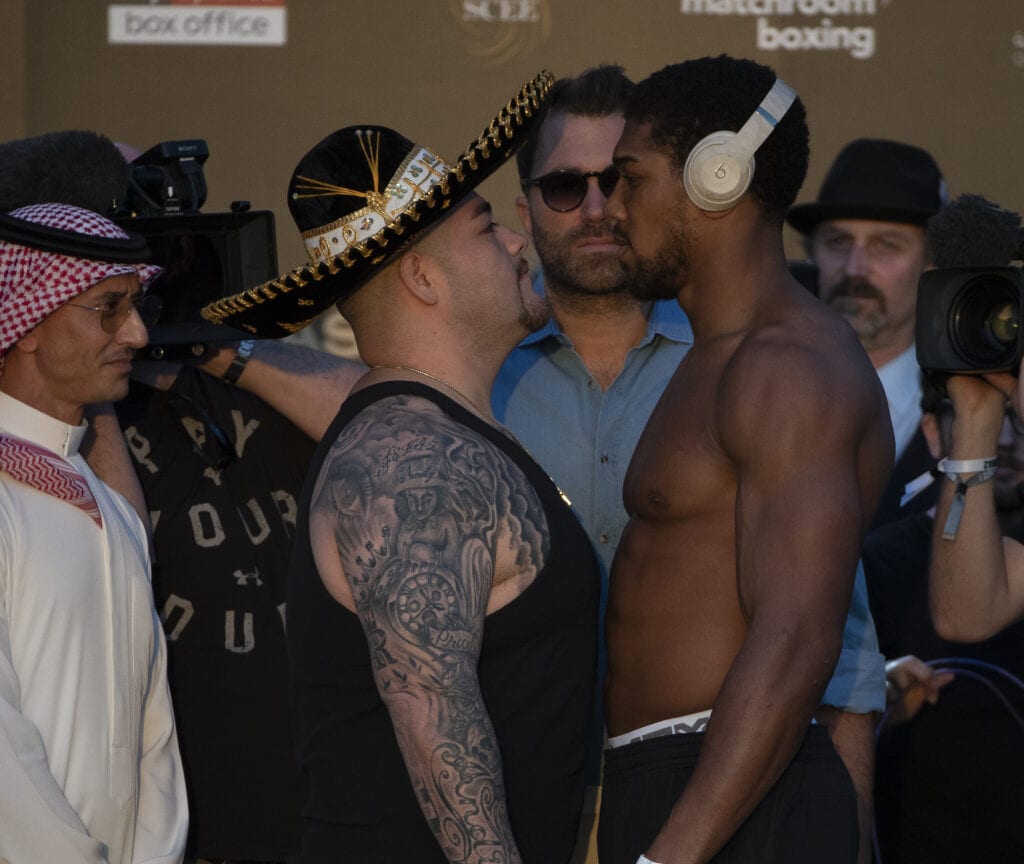 The biggest day in heavyweight boxing in 2020 is upon us, and the rematch between Andy Ruiz Jr. and Anthony Joshua, and you would be hard-pressed to find any card with as much intrigue or with as much at stake as this one.  I like anyone who watches boxing, can tell you how everywhere will be tuned into the rematch that is taking place in Saudi Arabia. Just a mere six months ago, Ruiz, a late replacement, upset the then WBA, WBO, IBF, and IBO (yes even that belt too) titleholder Joshua by stopping him in the seventh round back in Madison Square Garden in New York City.

Hear below our breakdown of the matchup in the latest installment of the Big Fight Weekend podcast below:

Ruiz came into that fight the underdog and is coming into this one as well to retain the belts against Joshua Saturday. Much was made as early Friday morning, Ruiz came in at 283 pounds which were 15 more than the June matchup this year and quickly drew comparisons to when Buster Douglas when he took on Evander Holyfield back in 1990. It’s easy to see why even considering that Joshua for this fight came in slimmer than was for the first one. Boxing social media had a field day, either explaining the reasons for Ruiz’s weight gain ranging from muscle weighing more than fat to the sombrero he wore at the weigh-in being. Whatever your theory on all of that is, Ruiz is definitely bigger than he was last time, and we’ll see how much that will affect him in the ring if this fight goes the distance.

Wow. Ruiz weighed in at 283 1/2. That's crazy. He was much less with virtually no training camp. This is al feeling a little Buster Douglasish. But, we'll see when the fight takes place.

For Joshua, this is a redemption story and a chance to prove the naysayers that the loss was a fluke. Confusing to anyone who said it was a lucky punch that stopped him because of that punch landed four times in their June contest, forcing the ref to step in and halt it. Joshua, in this match, is righting the ship in a quest to regaining his titles. If he is victorious and is in a close fashion, talks of Ruiz-Joshua 3 will surface and will try to top the atmosphere this event will create Saturday night. It’s similar to the days of the 1980s boxing as a kid as they built an outdoor venue for this card to take place.

The winner of this fight will dictate the landscape of the heavyweight division and who they will face next. The next slated mandatory opponent for the winner of Ruiz and Joshua is Kubrat Pulev by the IBF. Depending on the outcome of this one, both or neither may face him and drop that belt altogether. The same could be said about the WBO mandatory challenger Oleksandr Usyk. Wake me when the WBA sorts that division out and the IBO is just happy to be mentioned in this article.

One thing is certain and it is what Matchroom Boxing promoter Eddie Hearn said, “The whole world is looking at Joshua-Ruiz, and I don’t think anything will happen until that fight takes place”.

That fight takes place today and will be what the world of boxing is watching.