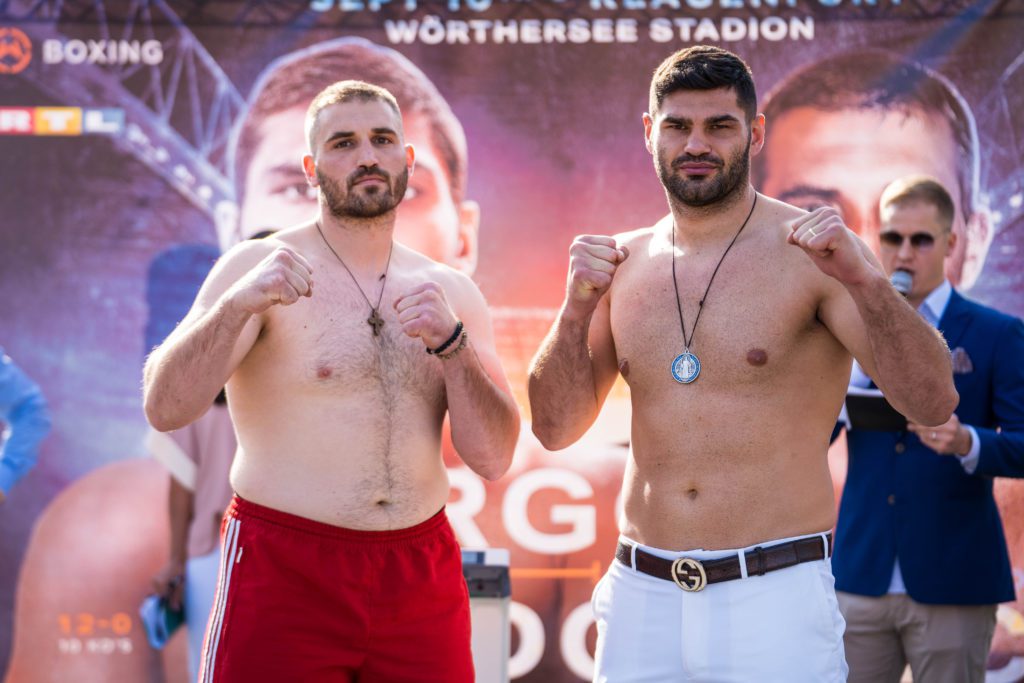 Filip Hrgovic (12-0, 10 KOs) continues his World Title charge tomorrow night as he looks to take out a year of frustration on Marko Radonjic (22-0, 22 KOs) when the unbeaten Heavyweights collide at the Wörthersee Stadium in Klagenfurt, Austria, live on RTL in Croatia and DAZN in over 190 countries and territories worldwide.

Hrgović has become one of the most avoided men in boxing with all of the IBF top 15 turning down the opportunity to face him in a Final Eliminator to become the mandatory challenger for Anthony Joshua’s Heavyweight crown.

The 29-year-old from Zagreb was last in action on November 7 at the Seminole Hard Rock Hotel and Casino in Hollywood, Florida where he handed American Heavyweight Rydell Booker his first stoppage loss, and after almost a year of inactivity, ‘El Animal’ is ready to be let loose in Klagenfurt.

“I’m very happy to be back in the ring,” said Hrgović, who weighed in today at 112kg (17st 8lbs 15oz). “It’s been a tough year. We’ve had a lot of problems finding opponents so I’m thankful to Marko for accepting this challenge. He is obviously a brave guy to be willing to fight me when a lot of top heavyweights refused. I’ve been in training camp for almost a year. I’ve done a lot of sparring and I’m in great shape. I just feel sorry for my opponent because I am going to put a year of preparation into this fight. Tomorrow night El Animal is back!”

“I’m expecting a good fight,” said the ‘Montenegro Hammer’ Radonjic, who tipped the scales at 113kg (17st 11lbs 2oz). “Filip is one of the best heavyweights in the world. He had a good amateur career, but so did I. People say I have a strong punch, but that’s not everything in boxing. It’s good to have 22 wins and all by knockout, but I have other strengths too. I’ve come here to fight. Filip is good, but I am too. Remember that. Let’s get ready to rumble.”

“Fans can look forward to a spectacular night of Heavyweight boxing tomorrow at the Wörthersee Stadium,” said promoter Kalle Sauerland. “When I saw Marko Radonjic’s record, I thought it was a typo – 22 wins, all by KO, is something you just don’t see in Heavyweight boxing. Filip has been looking for an opponent for the last 9 months, the whole IBF top 15 turned down the challenge so credit to Marko for taking the fight. I know Filip can’t wait to get back in the ring and back to what he does best.”

The IBF International Heavyweight Title contest between Hrgović and Radonjic headlines an action-packed event at the Wörthersee Stadium in Klagenfurt, Austria promoted by Wasserman Boxing and Matchroom Boxing in association with SEH Sports and Entertainment Holding.