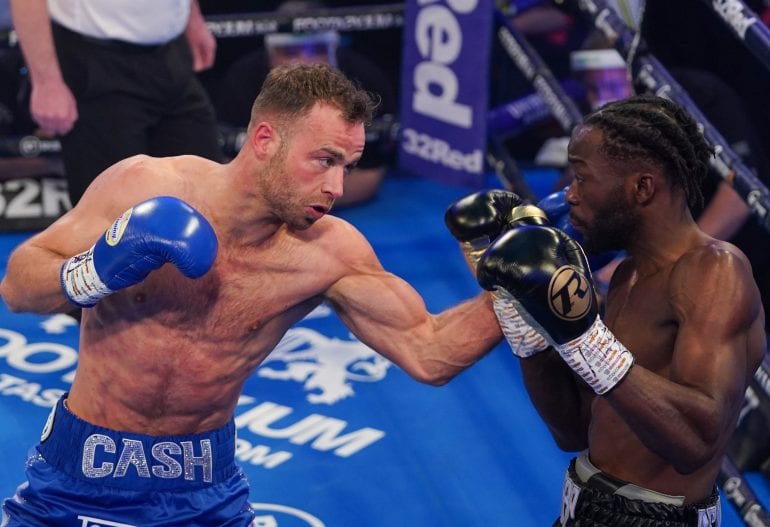 British Commonwealth Middleweight Champion, Felix Cash, was looking to make a statement in Saturday night’s main event for Queensbury Promotions. And, he did just that with a third-round demolition of fellow contender Denzel Bentley at famed York Hall.

Cash landed a big overhand right and jumped all over Bentley midway through the third round leaving the referee little choice but to jump in between the fighters, as Bentley was not firing back and taking one big shot after another along the ropes. The win improves Cash to 14 – 0 and was the fourth successful defense of his British 160-lb title.

He stops Denzel Bentley in the third to add the British Middleweight Title to his Commonwealth crown ?#BentleyCash #FightNightLive pic.twitter.com/MfCPJtNe0c

“I stunned him in the first round and I knew it was only a matter of time before I caught him, again….I started relaxing. I started walking firm. I just walked through him. I caught him and I seen him going and I just finished the job,” the 29 year old from Workingham, England said to BT Sport post-fight.

The rise of Cash in the U.K. continues after he won the title by TKO Rasheed Abolaji in February of 2019. He was defending for the third time Saturday night against the previously 14-0-1 Bentley.

It will take some time for Cash to work his way towards a potential title shot probably in 2022, if he can get there.

Currently four different individuals have the Middleweight belts including Jermall Charlo for the WBC, Gennady Golovkin for the IBF, Demetrius Andrade for the WBO and Ryota Murata for the WBA.

The undefeated Andrade has been the most recent in action, as he scored an easy 12-round win over Welshman Liam Williams in Hollywood, Florida last Saturday night. Charlo is slated to fight Juan Macias Montiel, in July on Showtime and we’re still waiting to find out when the former longtime undisputed champ Golovkin or Murata will be back in action next?

For now, Cash is also aiming for a possible fight with the son of former English world champ, Chris Eubank, Jr.