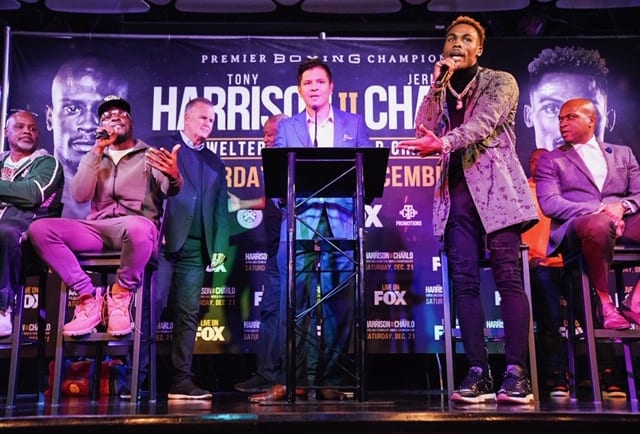 The Coronavirus pandemic has once again touched the world of boxing, as the father and the trainer for former WBC World Junior Middleweight champion Tony Harrison has died due to complications from the illness.

You was in a tough fight and you went the distance the decision just didn go our way but we was together every step of the way what more could I ask!!!! My right hand forever get some rest pops it ain’t goodbye just see you later!!

“My right hand forever, get some rest pops. It ‘aint goodbye just see you later!!,” Harrison wrote in the post.

Salaam had been battling the illness for some time and Harrison had even put this encouragement tweet out for his father last Thursday:

The 59 year old Salaam has been in Harrison’s corner throughout his career and as his rise to prominence began in the 2010s. It saw “Super Bad” get to 21-0 and top contender status before he was upset by 9th round TKO to journeyman Willie Monroe in Tampa, FL, in July 2015.

Harrison still earned the title shot with an elimination win beating Ishe Smith by split decision in Las Vegas in May of 2018. That led to his controversial upset of Jermall Charlo by 12 round split decision in December 2018 in Brooklyn, New York to capture the WBC 154 lb. championship. Many at ringside scored the fight for Charlo, but Harrison handed him his first defeat.

Harrison subsequently suffered an ankle injury in training that derailed their rematch in the summer of 2019, ultimately delaying it until a full year later. Then, after a war of words in the promotional tour last winter, Charlo out fought and wore down Harrison for an 11th round TKO in the PBC on FOX main event in Ontario, California, to recapture his title.

PBC is saddened to learn of the passing of Ali Salaam — the father and trainer of Tony Harrison. The 59-year-old Salaam died of complications related to the coronavirus.

PBC sends its prayers and condolences to Salaam's friends and fighters and the Harrison family. pic.twitter.com/3uSPrZiMvZ

Salaam was a former fighter himself, having competed as a welterweight out of Detroit in the 1980s, finishing with an 11 – 7 record.

Legends Calzaghe and Hopkins tangled in 2008
Josh Taylor says Pacquiao is a dream matchup
Advertisement
To Top
We use cookies to ensure that we give you the best experience on our website. If you continue to use this site we will assume that you are happy with it.Ok