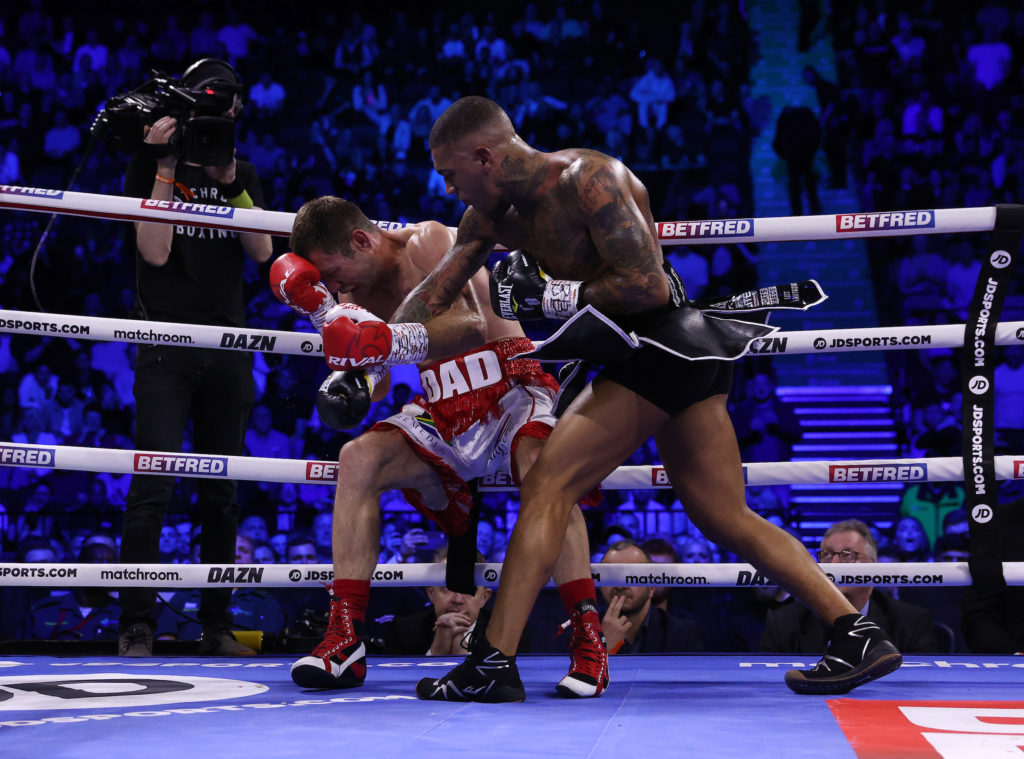 As rising welterweight star Conor Benn was heading into his fight with Chris van Heerden much of the discussion focused on whether Benn could be troubled by facing a southpaw.

The answer? A resounding no.

After a competitive first round, Benn blew van Heerden away with an onslaught of shots in a crushing second-round knockout in their scheduled 12-rounder on Saturday in the main event of the Matchroom Boxing card on DAZN at AO Arena in Manchester, England.

Benn, the son of British legend and two-division champion Nigel Benn, scored his second devastating knockout in a row. On Dec. 11, Benn flattened former junior welterweight titlist Chris Algieri in the fourth round.

Some thought van Heerden’s left-handed stance would be a problem for Benn, but he handled it just fine and then some.

As Benn made that comment he was standing next to former unified junior welterweight titlist and longtime welterweight contender Amir Khan, who was a spectator at ringside and invited into the ring by Benn and Matchroom Boxing promoter Eddie Hearn in an obvious effort to try get a feel for the interest in an all-British fight between Benn and Khan.

Van Heerden, with his awkward style and movement, made the opening round close and did the same in the opening moments of the second round until the patient and poised Benn hammered him with a straight right hand that rocked van Heerden.

Benn continued to fire punches, about eight more, including a hard left that badly hurt van Heerden and made him cover up and then a short right hand that caught him clean on the jaw, pounding him to the mat.

Van Heerden got to all fours but was in rough shape and referee Steve Gray waved off the fight at 59 seconds as the pro-Benn crowd cheered wildly.

Whatever trickiness van Heerden was supposed to present never materialized and Benn (21-0, 14 KOs), 25, of England, had himself another impressive victory.

Van Heerden (28-3-1, 12 KOs), 34, a South Africa native fighting out of Santa Monica, California, had only been stopped once previously, in the eighth round in 2015 by Errol Spence Jr., before Spence would go on to win the IBF welterweight title in 2017.

Van Heerden was fighting for the first time since a first-round no decision against 2020 prospect of the year Jaron Ennis in December 2020 in a fight that ended when van Heerden was unable to continue after suffering a bad cut from an accidental head butt.

As for Khan (34-6, 21 KOs), 35, he came off a 2½-year layoff to face British rival and former welterweight titlist Kell Brook (40-3, 28 KOs), 35, on Feb. 19, also at AO Arena in Manchester, in a fight long past when it would have been very meaningful. But they did big business and Brook destroyed Khan with ease by sixth-round knockout. Khan talked about retiring after the fight but soon said he would probably fight on.

Khan may be a shadow of when he was at his best, but Benn wouldn’t turn down the fight.

“If achieve half of what this man achieved I’ll be happy,” Benn said. “Idols to rivals. Every young up and coming fighter wants to challenge himself. That’s all that is.”

Whether it’s Khan next or another named fighter next, clearly Benn is on a trajectory towards a title shot probably by 2023.