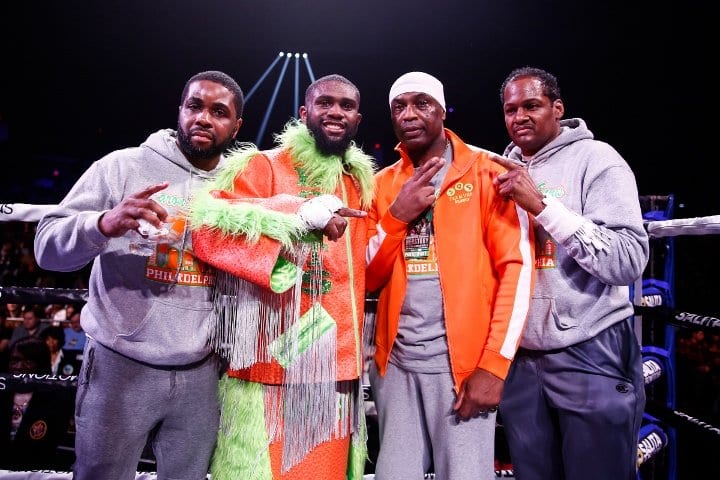 There is no question that the buzz around undefeated welterweight prospect Jaron Ennis is big. After his fourth-round stoppage in Atlantic City of a resilient Bakhtiyar Eyubov last weekend on Showtime, it’s only going to get bigger.

Ennis manager, Cameron Dunkin spoke with Keith Idec of Boxingscene.com after his one-sided victory over Eyubov and feels that he would defeat Terence Crawford right now.

Dunkin was Crawford’s co-manager throughout the beginning stages to when he became a three-division champion, so he has been around both guys. If you were looking for Crawford versus Ennis n 2020, keep waiting. Ennis is currently ranked 13th by WBO at welterweight, and from his point of view, they don’t want to face him.

“Like I said before, we been trying to get these guys in the ring,” Ennis said, following his victory over Eyubov last Friday. “These top-10 guys, these top-15 guys, they don’t wanna fight me. So, I’ve gotta fight who they put in front of me for now. And until [then], like I said before, I’m just gonna keep winning, keep doing my thing, keep showing the world my talent, and keep getting better, faster, stronger, smarter, defense tighter and keep winning.”

Dunkin continued his glowing praise about Ennis. He also mentioned what a lot of people in boxing circles have been saying about the 22-year-old.

“He’s the best fighter I’ve ever signed – bar none,” Dunkin said on Ennis. “Including Crawford, including [Nonito] Donaire, including [Mikey] Garcia, Diego Corrales, Timothy Bradley. I can go on and on. I’ve had 35 world champions, but no one like this, not even close.”

We won’t know how this will match up until it happens, but it will be something to look out for some time down the line with realistic expectations.

Parker on Usyk matchup- ‘Usyk is the B-side’
Plant-‘This world title is staying right here’
Advertisement
To Top
We use cookies to ensure that we give you the best experience on our website. If you continue to use this site we will assume that you are happy with it.Ok