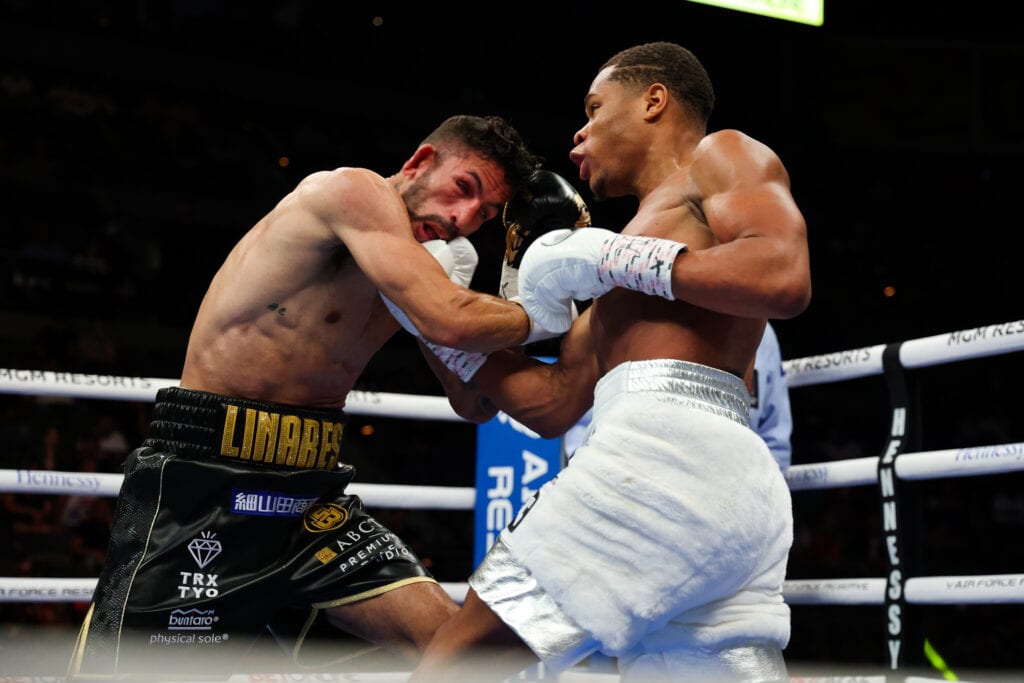 Dominant Early Devin Haney Had To Hang On For Decision Win

The first nine rounds of his WBC Lightweight title defense, unbeaten champion Devin Haney appeared to be in complete control and on his way to an easy win over veteran former World Champ Jorge Linares Saturday night in Las Vegas.

However, that’s why they call them the championship rounds, and the 35 year old veteran scored big punch after big punch late in the fight to test the young champ. But, in the end Haney prevailed with the unanimous decision by scores of 116-112 on two and 115-113 on the third.

The California native Haney improved to 26 – 0 with 15 Kos and was clearly more impressive over the course of the bout.

Haney controlled the fight with his jab and superior hand speed for much of the early rounds. He also hurt the Venezuelan Linares briefly with a good left of the body in the sixth.

However Linares, with his left eye swelling was able to score a solid right hand that wobbled Haney’s legs in the final seconds of the 10th round.

Haney got the 60 second break in between rounds, but was still on wobbly legs in the 11th. Linares, now 47-6, caught him again with a solid left and then, late in the round with a series of right hands. But, the champ never went down. Still, he had one more round to survive.

Haley’s corner confidently told him going to the 12th that he had to fight won, but he still stood toe-to-toe with Linares. And, the former three time world champ hurt him again about halfway through the round with a right- left combo. Haney appeared to be tiring rapidly in the final minute and had to hang on repeatedly to Linares to survive in the final seconds of the fight.

Still, Haney landed almost 100 more total punches than Linares over the course of the fight, including 136-91 in power punches for the bout. And he deserved the unanimous decision win.

“I came in here. I got the win. I’m satisfied,” Haney said to DAZN post fight.

On having to recover after Linares’s big punch at the end of the 10th,

“It was a good shot. I was never hurt….I continued to box smart….Still continue to do what the gameplan was and I got the win.”

“Of course I want to make the biggest fights happen. Teofimo Lopez is next. Let’s do it,” Haney said confidently.

Now, we wait for that potential bout with Haney learning fast on Saturday how to finish out a decision win while being wobbled late.