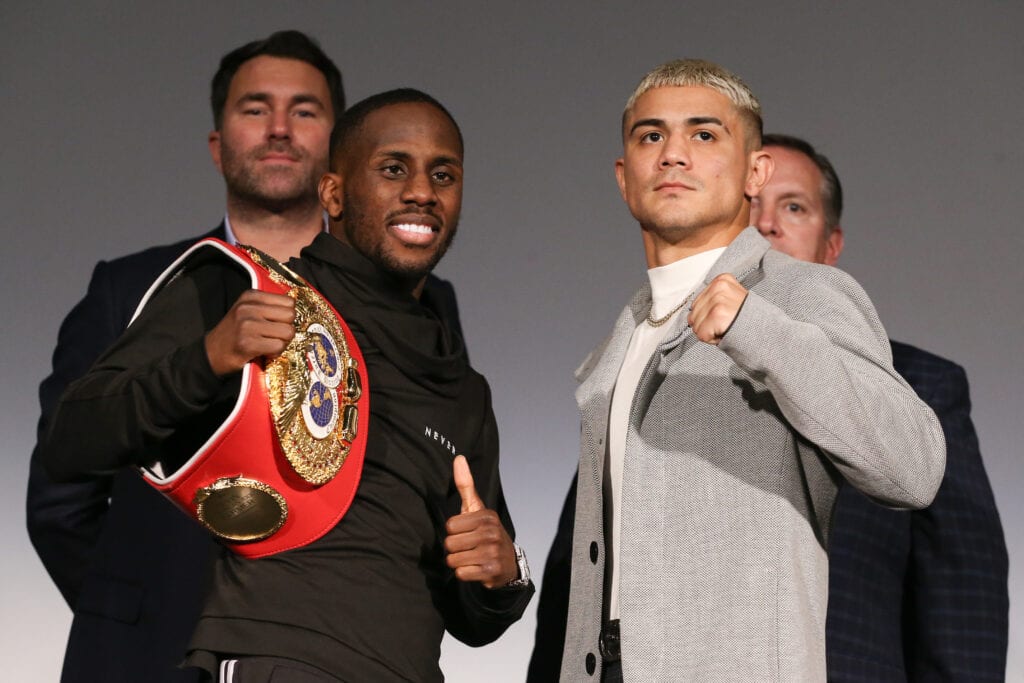 Diaz- ‘I can’t wait to shut this guy up’

JoJo Diaz is ready to rip the IBF Super-Featherweight title from Tevin Farmer and ending the war of words that sees him challenge for the belt at the Meridian at Island Gardens in Miami on Thursday night, live on DAZN in the US and on Sky Sports in the UK.

Diaz (30-1 15 KOs) is hunting for a World title at the second attempt having fallen short against Gary Russell Jr. for the WBC Featherweight strap in May 2018 and failing to make the weight against Jesus Rojas for the WBA crown three months later.

The Californian has found 130lbs to be his sweet spot with three wins in 2019 setting up his shot with Farmer (30-4-1 6 KOs), and tensions between the pair on social media and in a clash in Las Vegas during the Canelo Alvarez vs. Daniel Jacobs fight has stirred up huge interest in Thursday night’s clash.

Listen to our preview of the fight with the latest edition of the Big Fight Weekend Podcast below:

Despite the tensions between them, Diaz has plenty of respect for the champion and knows he has to penetrate the ‘American Idol’s’ slippery defense if he is to take the title away from Farmer.

“I wanted to fight the best for a World title and that’s Tevin Farmer,” said Diaz. “I started calling him out because I knew I was going to climb up the rankings. I was talking shit to him at the press conference in Las Vegas, I threw the out my hook and he caved in and fell into my net, started talking shit back and everyone wanted the fight to happen.

“Farmer could have chosen an easier fight, but he has a lot to prove to the critics and to himself that he’s the best in the division and I feel I have a lot to prove too. He’s talked a lot, so I hope he backs it up and brings it.

“I learned a lot from the Russell fight, knowing that I have to take more risks in there. I could have had him and won the fight, I feel like I am a better fighter than him but I let off the gas and I wasn’t opening up as much as I should have but it was a learning experience for me and it’s made me the fighter that I am today.

“I’m hungrier than ever. I know Tevin is a very good fighter, but I have a lot at stake and it’s the opportunity of a lifetime and I have to go out and showcase to everyone that I am the next star of the sport.

"Tevin Farmer, I hope you're sleeping with that belt, because two more days that s–t is gonna be mine." – @JosephDiazJr 🗣️#MiamiFightNight pic.twitter.com/EPzo4F8X4D

“I can’t wait to shut this guy up,” Diaz stated. “He’s a hell of a fighter though, don’t get me wrong. He’s a World champion for a reason, he knows how to win, he’s a talented defensive boxer, he knows how to dodge and make you miss and how to win rounds. But he’s never fought a guy as tough as me, his defenses have been against good fighters, but none of the level that I bring. I feel I am an elite level guy and I have championship pedigree and on Thursday night, it’s going to come out.

“I don’t want easy fights; I could have gone down an easier route but that wouldn’t satisfy me. I want to go out and prove that I will fight the best and I want to win a World title by taking it from the champ. Tevin is the best fighter at 130lbs now and I want to dethrone him and that would be the most satisfying way to achieve my dream.

“If he wants to bang in there that’s cool with me, that’s my cup of tea, but if wants to move around and create his angles and be slick how he is, trust me, I have got everything to capitalize and land the shots to hurt him, slow him down and land devastating shots. I don’t see it going 12 rounds, I think I will hurt him and make him feel my shots. I’m happy and ready to go 12 rounds with him though, I’m not going to go in swinging for the fence, that’s what he wants. I’ll fight a smart fight.”

Farmer looking for unification bouts after Diaz
With deadline looming Joshua-Pulev still haven’t agreed
Advertisement
To Top
We use cookies to ensure that we give you the best experience on our website. If you continue to use this site we will assume that you are happy with it.Ok