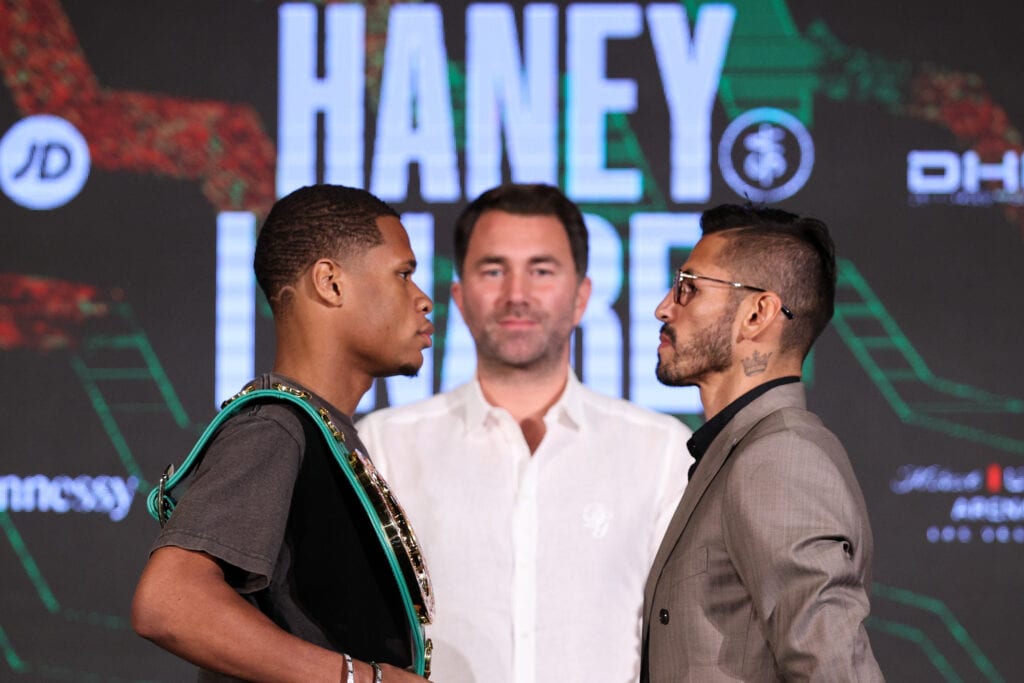 Devin Haney Faces His Toughest Yet In Linares

WBC Lightweight champion Devin Haney is against the most important name for his fight resume in former titleholder Jorge Linares.

This time around, don’t expect any knockout guarantees.

Haney (25-0, 15 KOs), speaking with Boxingscene before the final press conference took off yesterday, wasn’t about to call any shots in the ring for Saturday.

“I don’t wanna make any predictions for a knockout because styles make fights,” Haney said to Boxingscene about getting a stoppage. “and, you know, he’s at a point in his career where he has a lot of experience and, like Gamboa, some people, they just know how to survive.”

Check out our latest Big Fight Weekend Podcast, where we spoke to Jake Donovan of Boxingscene.com about this fight and the Showtime card taking place this Saturday from Dignity Health Sports Complex in Carson, California.

So why isn’t Haney saying when he is going to stop Linares? Well, those with short-term memory and the buildup to his last contest against Yurkois Gamboa, that was pretty much the entire conversation before the bell rang. Once that didn’t happen and got an easy unanimous decision, he’s been having to hear the backlash because of it.

That is why no shots are called for Haney, but the goal is to win and advance to the winner of Javier Fortuna and Joesph “JoJo” Diaz in July.

“This is the time I’ve been waiting for; this is the moment and my time to shine against an incredible opponent finally and thinks he can put up a good fight and win against me. This is a huge opportunity for me, this is time to show everything I’m made of,” Haney said.

While Haney remained reluctant to predict he’ll become the sixth opponent who will stop Linares inside the distance. He’ll look to stop the current streak Linares is running as he looks to be 5-0 against competition from the Matchroom Boxing stable. Going to be a big goal for Linares as he is almost a 5 to 1 underdog on most sportsbooks to make that happen.

“I’m happy he said this was the best training camp, and he’s in the best shape of his life. I want the best Jorge Linares so when I win that there are no excuses and the world knows he came in 100 percent,” Haney noted.