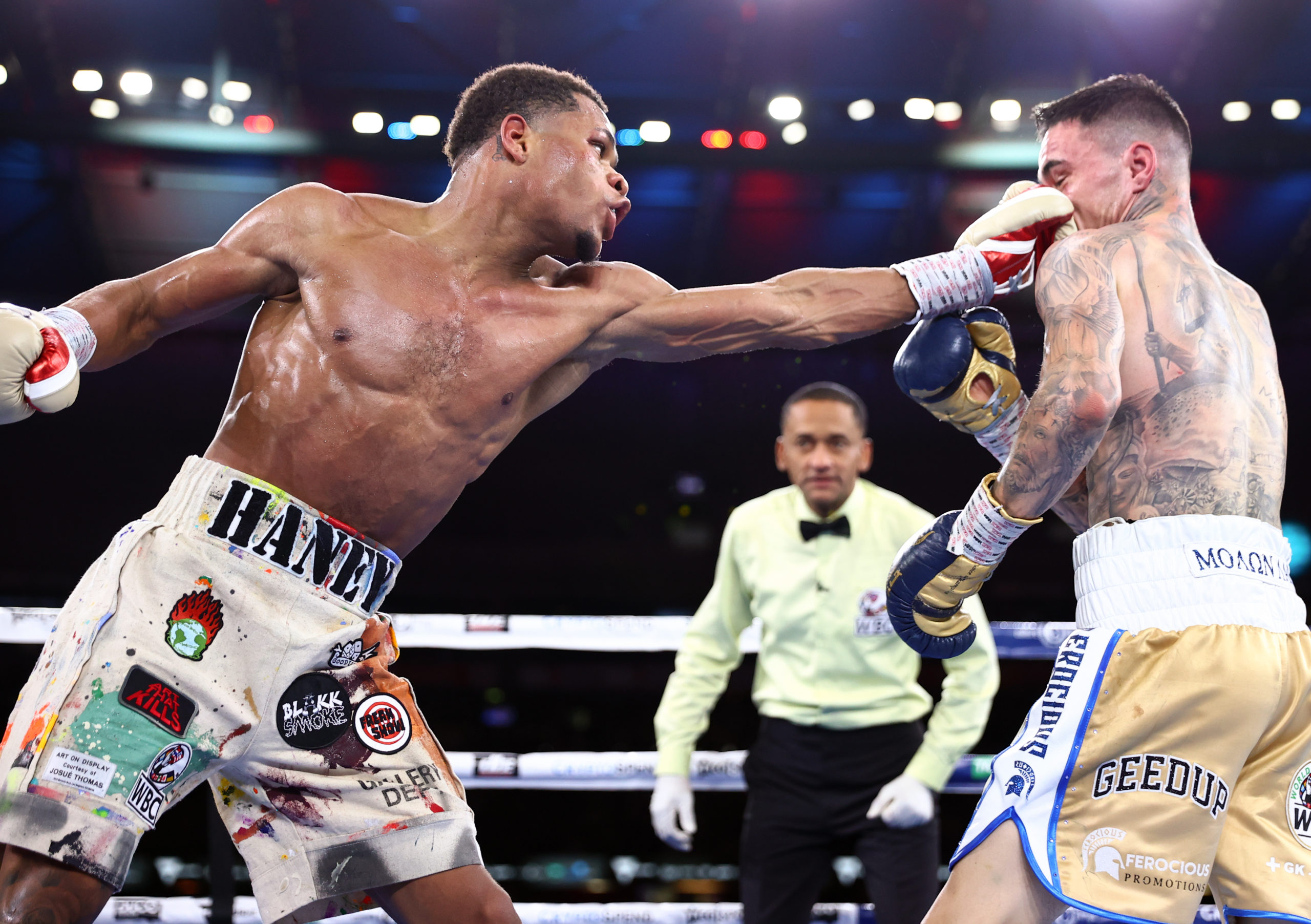 Devin Haney, some 8,000 miles from home in enemy territory, produced a masterful performance.

Virtually everybody in the crowd of 41,129 – the second largest attendance in Australian modern boxing history behind the 51,053 that attended Manny Pacquiao-Jeff Horn in 2017 – was against Haney, who insisted from the moment the fight was made that he would dominate because of his superior skills.

Haney was on the money with that assessment. Judge Pawel Kardyni scored it 118-110 and judges Zoltan Enyedi and Benoit Roussel both had it 116-112, which seemed way too close. Big Fight Weekend scored it 119-109 for Haney, who defended the WBC 135-pound title for the fifth time and took Kambosos’ WBO, IBF and WBA titles – and The Ring magazine belt emblematic of the lineal championship — to fully unify the division.

“I take my hat to him because he’s a true warrior,” Haney said of Kambosos. “Anyone who steps in the ring I respect. It was nothing but respect through the whole build up. Even though be got disrespectful I stayed a gentleman and I stayed professional.”

Haney became the first undisputed lightweight champion of the four-belt era and the first to claim the undisputed crown in the division since the late Hall of Famer Pernell Whitaker reigned with all three belts from 1990 to 1991 before vacating to move up in weight.

Making Haney’s victory even sweeter was the presence of Bill Haney, his father, trainer and manager, who initially had his application for a work visa denied because of Australia’s strict rules that do not allow convicted felons into the country. Bill Haney served about a year in jail for a drug conviction 30 years ago – long before his son was even born.

But a review of his case produced a last minute approval and he arrived in Melbourne the night before the fight to run his son’s corner. He had sent close friend and noted trainer Yoel Judah in his place, but they celebrated together after Devin’s victory.

“This is a dream come true,” Haney said. “I was going through it without my dad being here because I knew this was a big moment for both us. We both dreamed it since we started out. We said we wanted to be the best. It would have hurt me to accomplish this without him, so I’m so thankful.”

Bill Haney, who got his son into boxing and has been with him every step of the way since he turned pro at age 17 and fought many of his early fights in bars and pool halls in Tijuana, Mexico, was overjoyed that he was there for his son’s shining moment.

“This means everything,” he said. “I told people what kind of fighter he was. They didn’t believe me and now he showed the world. He came to pitch a shutout on a big stage like this with all the crowd against him, and they were silent. I’m so happy.”

Indeed, Devin Haney quieted the crowd with his domination. He relied heavily on a left jab that he repeatedly jammed down the middle into Kambosos face, which was marked up around both eyes. Haney boxed beautifully, landed 1-2 combinations, jabs to the face and belly and rarely got hit cleanly thanks to his defensive prowess and movement. There were times when Kambosos would swing wildly and not come close to landing the shot.

“I landed it a few times, but he had a smart game plan and he did what he had to do to win,” Kambosos said. “Today they gave him the decision but I’m sure that will change when we get it on again. Respect to him.”

Haney (28-0, 15 KOs), 23, of Las Vegas, never came close to scoring a knockdown but he certainly got Kambosos’ attention a few times, including with an uppercut in the fifth round.

Kambosos looked lost at times, like he had no idea what do against Haney’s jab or movement. It was a far different kind of fight than in November when he traveled to New York and won a split decision in a huge upset in a fight of the year contender against Teofimo Lopez to take his unified titles.

Kambosos’ trainer, Javiel Centeno, told him after the 10th and 11th rounds that he needed to do something significant on offense to get back into the fight and although Kambosos tried, he came up empty.

“I was sticking to the game plan. The game plan was to go in there and hit and not get hit and I did that for the majority of the fight,” Haney said. “I took the last round off because I knew I was comfortably ahead but I fought a good, smart fight.

“Let him have his time and we’ll do it again. I have to implement a few things but I thought the fight was very close. But I’m not gonna wreck his moment. I had my moment last November, so let him have his moment and I’ll see (him) again real soon,” Kambosos said, referencing the fact that Lopez never gave him credit for defeating him.

“He boxed his game. He moved. He didn’t really want to come to fight too much but that’s his game, so I give him respect. I’ll get him back end of this year. I took the risk. I fight the best of the best and at the end of the day I didn’t have to fight him. Not many wanted to fight him, but I gave him the shot straight away so I’m sure we’ll do it again.”

Haney, draped in belts, said he appreciated Kambosos giving him the opportunity to fight for his belts when he didn’t have to and that he would honor his rematch obligation. Kambosos was originally slated to face former unified champion Vasiliy Lomachenko, but he bowed out to remain in Ukraine and held defend his country in its war with Russia.

“I’m not ducking or dodging nobody,” Haney said. “Of course, if it makes sense and people want to see it, the network wants it then of course I’ll do it again.”