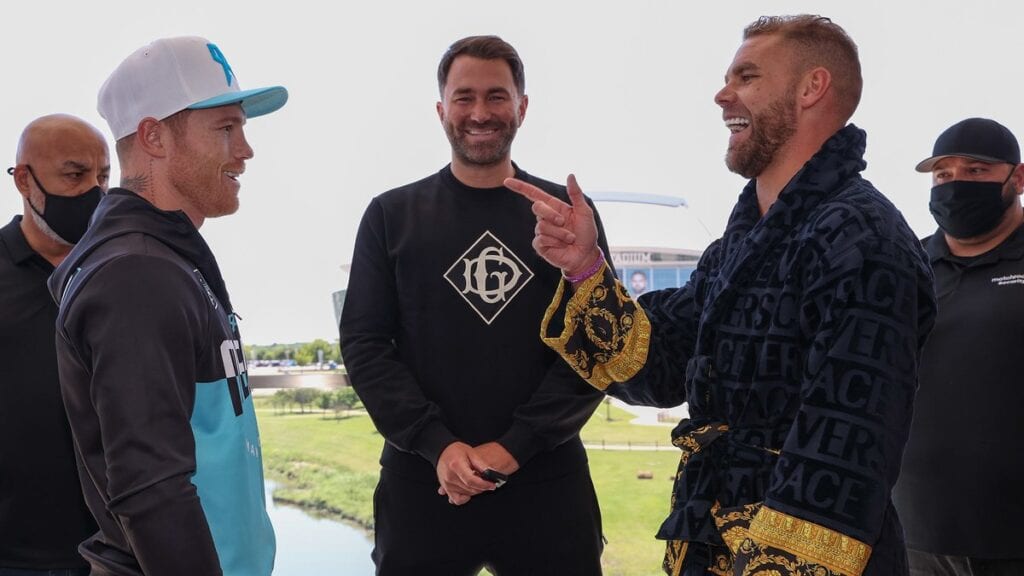 DAZN’s Mora On Saunders Chances- “Stay On Outside”

What kind of chance does WBO Super Middleweight champ, Billy Joe Saunders of England, have against a Hall of Fame caliber fighter like WBC/WBA champ, Canelo Alvarez Saturday night? Not much.

But, if he is going to stay in the fight, make things interesting and maybe, even push Canelo into working hard for another championship win, we got the insight on what some of his keys will be.

That’s when DAZN analyst and former Middleweight contender Sergio Mora joined our Big Fight Weekend Podcast live from Arlington, TX late in the week to discuss that subject and more about Canelo vs. Saunders.

You can hear the full interview by clicking below,

“He has to go in circles, not stay in place. Not fight on the inside with this man (Canelo) right now. Stay on the outside….The long jab. Keeping the fight in the middle of the ring. Stay off. the ropes. These are a lot of the things you hear fighters say often, but it’s difficult to do, especially with a fighter like Canelo, who’s an expert at cutting off the ring,” Mora told us.

When asked about the intimidation factor of 65,000 fans at AT&T Stadium roaring from the ringwalk to then, anything Canelo tries or does? Mora continued,

“His fellow British fighter Callum Smith told him that (who fought Alvarez in San Antonio in December). He told him it’s totally different fighting Canelo in this environment. A jab makes everyone roar. But, that’s what it is to have to fight a superstar like that.”

Canelo, 55-1-2, will be back in the ring for the third time in five months on Saturday night at the home of the Dallas Cowboys. His last defense against lightly regarded Avni Yildirim of Turkey in February was an easy, almost silly, TKO at the end of the third. This, as Yildirim clearly didn’t want to take any more significant punches and quit on his stool after nine minutes.

However, the Smith 12 round decision win referenced by Mora was impressive. This as, Alvarez dominated a successful taller fighter in large part by putting on a clinic in close quarter fighting over 36 minutes.

Alvarez and Saunders were to have fought last May before the Covid-19 pandemic shut the sport down. In the meantime after, Saunders got himself indefinitely suspended by the British boxing Board of Control for comments he made on a social media video joking about domestic violence.

Still, as we discussed with “The Latin Snake” on the podcast, beating Murray in an empty arena in your home area isn’t on the same planet as coming to America and stepping through the ropes for what Saunders is about to face.

Now, we’ll see if he’s truly ready to put on a great performance against one of the world’s best? Or, will he be remembered for being the British version of Yildirim, who simply didn’t belong (no matter the hype) in with Canelo?