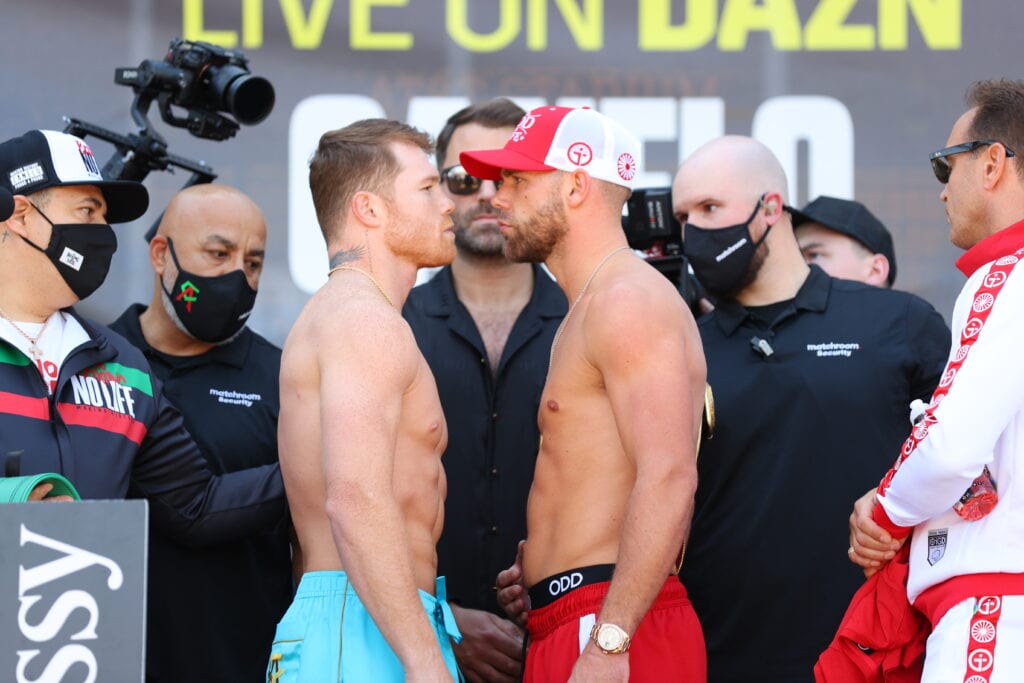 If you were looking for those who have missed weight and caused chaos during this event, you wouldn’t find it on the scales as Alvarez (55-1-2, 37 KOs) came in at  167.4 pounds, while Saunders (30-0, 14 KOs), officially weighed 167.8 pounds. As a result, Saunders will place his WBO belt on the line, while Alvarez will have his WBC and WBA belts up for grabs in this contest.

We spoke at length about this fight in our latest edition of the Big Fight Weekend Podcast with special guests “The Boxing Writer U.K.’s” David Payne and DAZN analyst Sergio Mora who will call the action from ringside Saturday night.

“It’s one of the biggest events I’ve ever been involved in, and this morning, we officially broke the record for the biggest indoor crowd in American boxing history,” said promoter Eddie Hearn about the fight this Saturday. “We will have 70,000 people in the AT&T Stadium on Saturday night – I am absolutely buzzing for this. I think this could be the best atmosphere we’ve ever seen.”

Alvarez and Saunders already broke the pre-sale records for the bout on Saturday night. With over 65,000 tickets now sold with limited seats remaining, their battle is set to overtake the rematch between Muhammad Ali and Leon Spinks at the Superdome in New Orleans in 1978 that drew 63,352 fans.

Now I didn’t want to believe they sold all of these at first, too, as it looked like a marketing ploy but today at the weigh-in looked like a block party as the open to the public event had anticipated 5,000 folks to watch fighters take on the scale had a number that looked based on television pretty close to that.

Saturday night is going to have a pre-pandemic vibe to it. Looking forward to the fights as Canelo chases down his quest for undisputed at 168 pounds. We’ll see if Saunders whose been playing the spoiler and heel all week long, thru this, can pull off the upset.