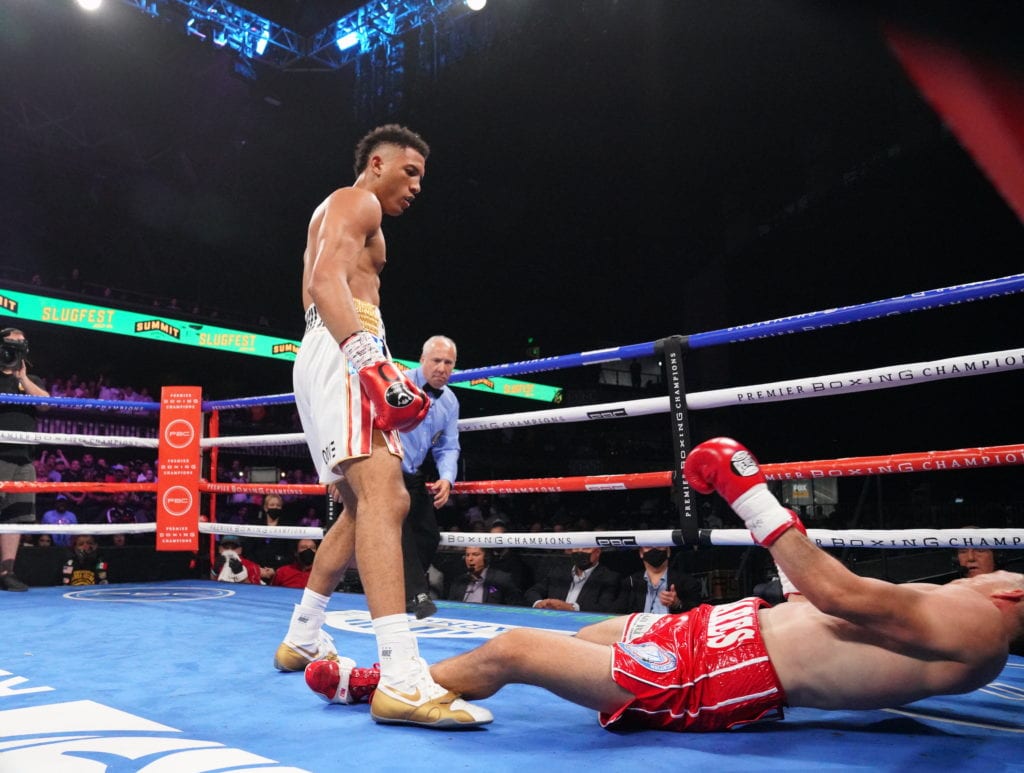 Cuban sensation and unbeaten WBA Super Middleweight Champion David Morrell Jr. (5-0, 4 KOs) defeated challenger Mario Cázares (12-1, 5 KOs) with a knockout just 2:32 into the first round of their contest that headlined FOX PBC Fight Night and on FOX Deportes on Sunday from The Armory in Minneapolis.

“I didn’t expect that to end so quickly,” said Morrell. “I thought it would be more like a five or six round fight. However, once Cazares stepped in the ring, I noticed that he was not ready to fight on my level. He wasn’t ready for this kind of test or this level of fight.”

On the devastating knockout, Morrell said, “When I saw the opening, I took him out. When I hit him, I saw his legs wobble and I knew he was gone, completely out.”

"What a devastating knockout dealt by Morrell." We couldn't have said it better ourselves Joe. #MorrellCazares #PBConFOX pic.twitter.com/VgRIDjOtAe

“I’m ready for anyone at 168 pounds and now the world can see it,” continued Morrell. “I would love to fight Caleb Plant. I’m ready to fight Plant. He’s an excellent boxer, but I’m ready to go.”

In the co-main event on FOX, cruiserweight Brandon Glanton (14-0, 11 KOs) defeated Efetobor Apochi (11-1, 11 KOs) by split decision in their 10-round bout. Glanton scored a knockdown to close out the sixth stanza as Apochi fell into the ropes. That knockdown proved the difference as judge Nelson Vazquez scored the bout 96-93 for Apochi, but was overruled by judges Mike Fitzgerald and John Mariano who both scored the contest 95-94 for Glanton. The loss is the first of Apochi’s professional career.

“I knew it was a close fight because at the very end he didn’t hurt me, but I staggered,” said Glanton. “We always talk about balance in the gym, though. I got the split decision because balance is something that we constantly work on. He didn’t hurt me, that’s why I was able to keep fighting.

“Thank God the judges saw it the right way,” continued Glanton. “That knockdown is something we worked on in the gym. I hope the boxing world sees what my coach is doing. The small details, the intricate things, make the difference in a fight like this. All the little details that he schools me on is what he told me would be the difference in this fight, and I’ll be damned if it wasn’t.”

“What can I say?” asked Apochi. “I thought I won the fight. I used my jab, showed some heart, had some good movement in there, but I’m not the judges. I don’t know what they saw, but I thought that I did what I had to do. He’s a tough guy. I won’t take anything away from him. He took some tough shots and he was still there.”

On the possibility of a rematch, Glanton said, “If they want the rematch, then I’ll do it again. I think I’ve proven what I needed to prove, but it’s easier the second time.”

In the FOX telecast opener, All Rivera (22-5, 18 KOs) defeated Omar “El Relámpago” Juárez (11-1, 5 KOs) by majority decision in 10-round attraction, giving Juárez the first loss of his professional career. Rivera scored a knockdown in the ninth frame, which was the difference in the contest as judge Scott Erickson scored the fight a 95-95 draw, but judge Octavio Rodriguez scored the bout 95-94 for Rivera and judge Kyle Shiely scored the fight 95-93 for Rivera.

“I was confident that I was going to get the decision,” said Rivera. “I was blocking a lot of the shots that Juárez was throwing. I was landing the more powerful punches. Juárez was doing good work in there, but we were landing the more effective shots. I feel like when I hurt him I maybe could have done a little more to get him out of there early and avoid the decision. But he’s a stronger fighter and I respect his talent.”

Juárez said, “I honestly thought that I did enough to get the win. I did get knocked down. There was one round where I stayed in there and took a couple hits, but I felt like I was the smarter fighter in there. I adjusted well and I thought I did well over all. Almost all of the greats have losses and I know I’m going to be great one day. I just have to fight through this adversity.”

On their professional experience levels, Rivera said, “I’ve been in the ring 27 times now professionally, and I think Juárez is still a kid who’s developing his skills. I’ve fought some of the best fighters around. I’ve won belts. So, I definitely think my experience played a difference tonight.”

“He was the better man today,” Juárez concluded. “I’m not going to take anything away from him. He’s a hard fighter. He’s from the Philippines, which has a lot of strong fighters. I respect him a lot, but I’ll be back.”

When asked about the knockdown, Rivera said, “We actually worked on that shot in camp. We also worked on the follow-up sequence. So, when it landed my corner wanted me to take it to the body to finish him, but he’s a tough fighter.

“I’m here for any 140-pound fighter that wants to step in there with me,” concluded Rivera.