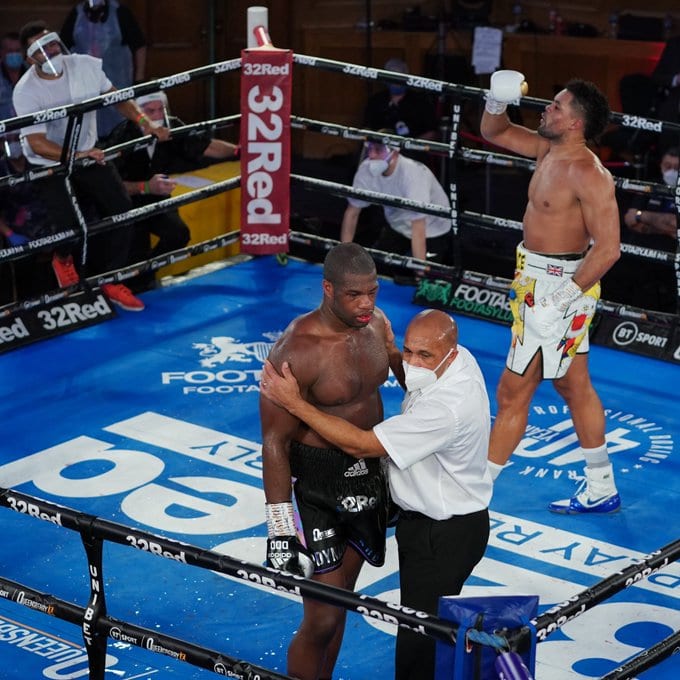 Joyce improved to 12-0 by stopping Dubois after repeatedly pounding him with left jabs and straight right hands throughout the fight.

The BBC reported Sunday morning that the 23 year old Dubois suffered the injury and will require surgery to repair the orbital bone of his left eye and potential nerve damage,

Daniel Dubois suffered a broken orbital bone and nerve damage around his left eye during his stoppage defeat to Joe Joyce.

Dubois’ eye began to swell badly in the middle of the scheduled 12 round bout and by the ninth round it was virtually closed. Joyce, who is 12 years older than Dubois, continued to methodically use the hard jab to his advantage. And, he eventually landed another significant one less than 30 seconds into the 10th.

That’s when Dubois staggered back a step, walked to his right and went down on a knee. He proceed to take the full ten count and the fight was over.

Of course, they now look foolish, as Dubois has a legitimate broken eye bone.

Dubois, who is now 15-1 as a pro, was taken to a local London hospital late Saturday night, but not before saying to BT Sport TV, “he caught me with a good jab – I couldn’t see out of the eye. It just happens.”

For his part, Joyce just got his biggest pro win and has now vaulted himself into legit Heavyweight contention with his impressive victory. He clearly took several of Dubois’ big right hands and wore him down with a great game plan.

Joyce hopes to get a shot another highly ranked contender, and it could be former Undisputed World Cruiserweight Champ, Oleksandr Usyk. Usyk just won his second fight at Heavyweight by decisioning veteran Dereck Chisora earlier this month. And, he is the #1 ranked WBO challenger.

It is unlikely that Unified champ Anthony Joshua, who has the WBO belt currently, will fight Usyk anytime in the first half of 2021 and he might get stripped of that title.

That could set up a possible Usyk/Joyce battle for the WBO belt later next year, as well.

Joyce Stops Dubois In Ten
Ty Payne Inks Management Deal With Tony Tolj
Advertisement
To Top
We use cookies to ensure that we give you the best experience on our website. If you continue to use this site we will assume that you are happy with it.OkPrivacy policy