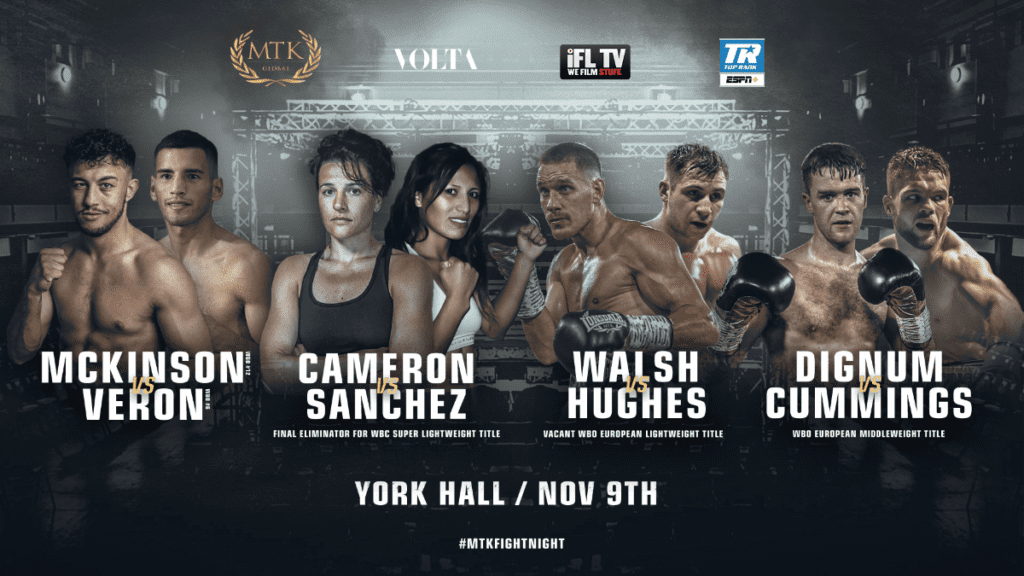 Conrad “Mr. Dynamite” Cummings and the unbeaten Danny Dignum will square off in a can’t-miss 10-round tilt for the vacant WBO European middleweight title Saturday from London’s York Hall on the latest edition of #MTKFightNight.

Cummings (17-3-1, 7 KOs) hopes to capture the WBO European middleweight belt for the third time. His second reign ended in March via unanimous decision to top contender Luke Keeler, but he returned to the win column in October with a six-round points victory over veteran Adam Grabiec. Dignum (11-0, 5 KOs), from Essex, England, will make his middleweight debut after fighting at super middleweight and light heavyweight. This is his first scheduled 10-round bout, and he is coming off an eight-round decision over former world title challenger and European welterweight champion Rafal Jackiewicz.

• Former world title challenger Liam Walsh (22-1, 15 KOs) will fight longtime British fan-favorite Maxi Hughes (19-4-2, 4 KOs) for the vacant WBO European lightweight belt. Walsh challenged Gervonta Davis for the IBF junior lightweight world title in May 2017 and was knocked out in the third round. He has fought once since taking a nearly two-year sabbatical from the ring. Before facing Davis, he captured British and Commonwealth honors at 130 pounds.

‘The Monster’ signs Promotional deal with Top Rank
Inoue-Oubaali would be amazing in 2020
Advertisement
To Top
We use cookies to ensure that we give you the best experience on our website. If you continue to use this site we will assume that you are happy with it.Ok