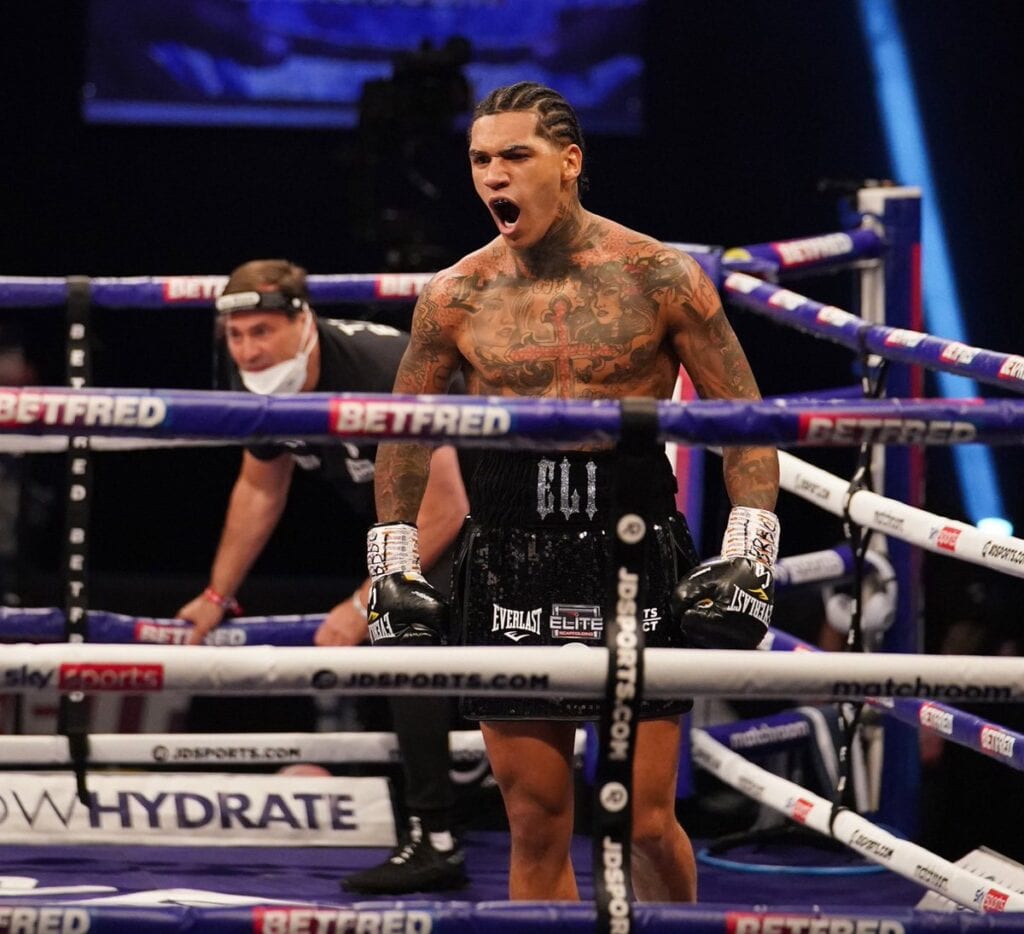 Connor Benn Destroyed Sammy Vargas In One Round

It didn’t take long for rising unbeaten British Welterweight Conor Benn to end things Saturday night, and he’s already immediately looking towards a familiar name that is likely next.

First, Benn overwhelmed veteran journeyman contender Sammy Vargas in just under a minute and a half in the main event of the Matchroom Boxing card at the Copper Box arena in Hackney Wick, England Saturday night.

Benn, now 18-0, 12 KOs, hurt Vargas with an overhand right followed by a straight left that staggered him backwards and the end came quickly just over a minute into the opening frame. Observe,

Benn’s barrage of punches with Vargas not firing back caused the referee to jump in between them ending things before things got worse. The official time was 1:22 of the first.

Benn’s emphatic stoppage comes on the heels of him having beaten Sebastian Formella by 10-round decision in November. The son of the former two-division world champion at Nigel “the Dark Destroyer”  Benn, is prominently making a name for himself in the U.K. and in the Welterweight rankings.

Immediately after the fight he turned his attention to what could be next and likely, former championship welterweight contender Amir Khan.

“I trained hard for it….it shows what level I’m at,” Benn said post fight to Matchroom. “Errol Spence, Danny Garcia, Vergil Ortiz, Amir Khan no one banged him (Vargas) out like that…Gimme Amir Khan. Gimme Shawn Porter. Those are the names I want.”

Khan, who is 34, if the former Unified Jr. Welterweight world champ, but has lost in two fairly recent Championship title bids. He was kayoed by one punch in the sixth by Canelo Alvarez in a Middleweight title shot in 2016. He moved back down to Welterweight and WBO champ Terence Crawford dominated and stopped him in April of 2019.

It was believed that Vargas 31 – 6 – 2 would have posed more of a challenge for the 24-year old Benn. This after Vargas at least lasted seven rounds in a knockout loss to unbeaten Texan welterweight, Ortiz, last July.

Alas, Benn wanted it to be over with quickly and definitely created a buzz in the U.K. and with fight fans everywhere watching with the impressive Saturday quick victory.

Now, we wait to see if Matchroom and promoter Eddie Hearn get a bout with Khan, who he promotes or if Benn might take a bigger step up than that?