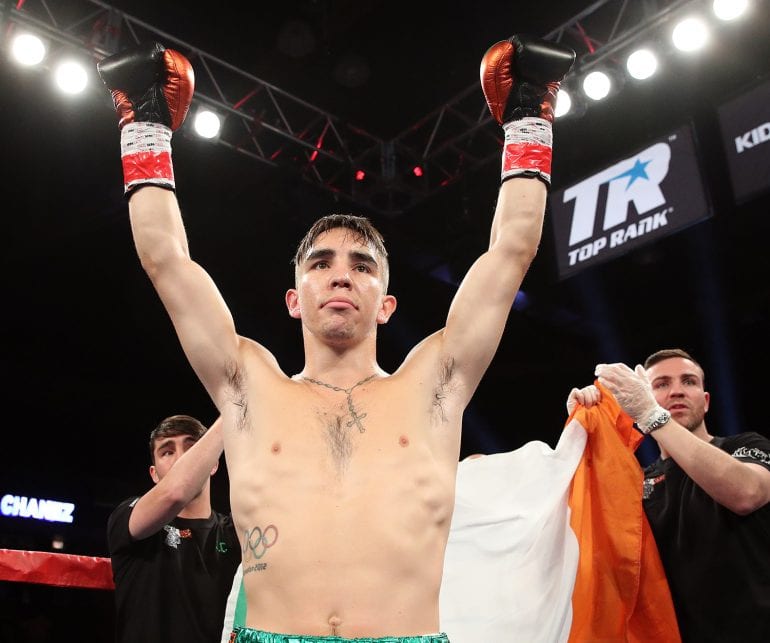 Rising Irish star featherweight Michael Conlan delivered in front of his home country fans in Belfast Saturday night. And, if you needed a clear indication of just how much of a favorite the former Irish Olympian is, we offer the more than three minutes of festivities, singing and his ring walk at Falls Park Saturday night.

Relive the whole thing, as Conlan comes out of the dressing room to Irish ballad songs and then, down to the ring in the makeshift stadium to the American rock group “Red Hot Chili Peppers,”

But nothing will compare to walking out in front of his Irish fans in Belfast ☘️ pic.twitter.com/GRBK8jhsTQ

And after that “Hero’s Entrance,” Conlan did not fail to deliver, as he scored a 9th round TKO over Argentina’s Diego Ruiz.

The now 12-0 Conlan was particularly effective to the body, shaking up Ruiz (21-3) in the fourth round with a series of rights and lefts to the midsection. He eventually dropped Ruiz with a hard right to the body in the 9th round. And then, after Ruiz wearily rose to his feet, Conlan rushed him, scoring several more times to the body, before referee Michael Alexander stop the fight with a minute-and-a-half remaining in round nine.

Clearly, there is still some work to do for the former Olympian. For one thing: Conlan must improve on the fundamentals, as he only landed 26 of 262 (10%) jabs on the night. However, he did score on 79 of 216 power punches according to Compubox for a better percentage.

And, in the end a crowd of more than 10, 000 that waited several hours through many preliminary undercard fights, got to see Belfast’s new favorite boxing son deliver an impressive victory. And, it will only help his legend and brand grow in the U.K.

The hope now will be that Conlan can get in the ring with one of the 126-pound champions either later this year or in the first part of 2020. It might be intriguing to see a matchup with England’s Josh Warrington, the IBF Featherweight Champ. The IBF had Conlan ranked #12 at 126 lbs. coming into Saturday night.

Conlan, promoted by Top Rank Boxing and Bob Arum, will have a harder time fighting WBA champ Leo Santa Cruz or WBC Champ, Gary Russell, Jr., as they are both represented by Premier Boxing Champions.