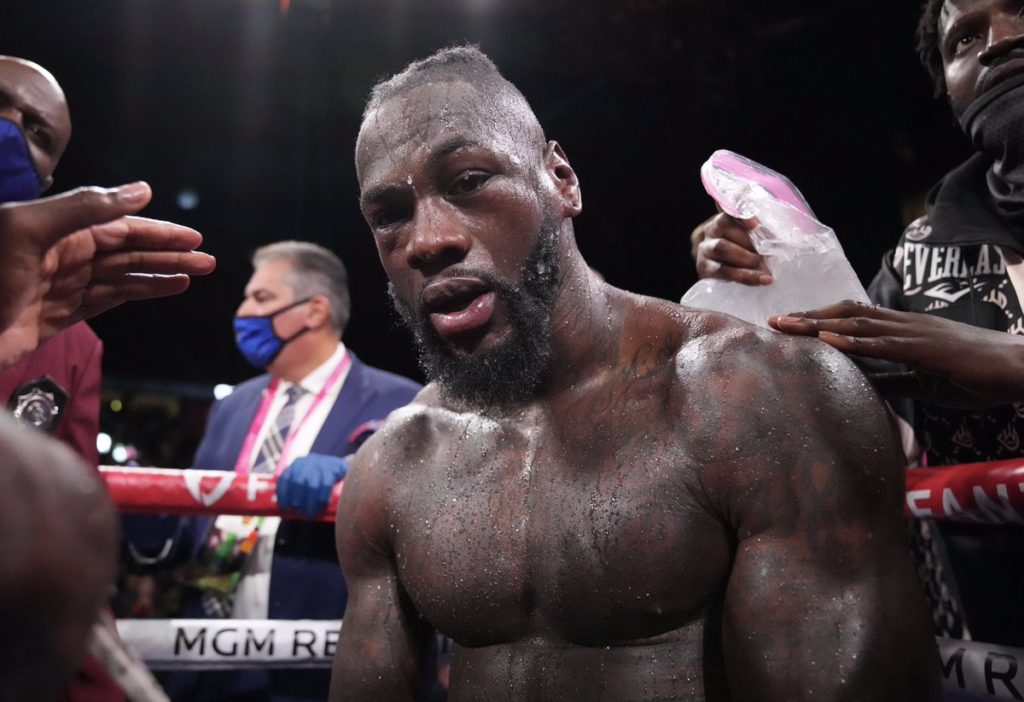 Coming off his KO loss Saturday night to WBC Heavyweight Champ Tyson Fury, Deontay Wilder clearly looked like a beaten and battered fighter. However, there is some conflicting info surrounding his medical condition two days later.

First, Wilder was reported to have suffered broken right hand, which is something that has happened on at least three previous occasions during his championship reign and two previous bouts with Fury. This is after his new trainer Malik Scott told reporters late Saturday night of the injury. Scott also confirmed that Wilder had gone to a local Las Vegas medical center to be evaluated for the brutal beating and KO that he suffered in the second half of the fight.

Then, Monday afternoon boxing insider Dan Rafael reported that Wilder had been treated and released early Sunday morning and according to Wilder’s advisor Shelly Finkel, had only suffered an injury to one finger,

Per Deontay Wilder manager Shelly Finkel, Wilder was released from the hospital late Saturday night with the only issue being a broken finger on his right hand that he will see a specialist to take care of. #boxing #FuryWilder3

Now, the question becomes: what’s next for the now twice beaten “Bronze Bomber,” who turns 36 years old next week? That may be a little difficult to answer. First, even if he has checked out neurologically, Wilder isn’t going to be in any condition  to be back in the right for at least 3-4 months. And. the broken finger instead of the broken hand is better news, if true.

If he chooses to fight on, Wilder will now be reduced to fighting a contender on a Premier Boxing Champions future show in 2022. There have been indications that he might fight another PBC Heavyweight, Andy Ruiz, who briefly held the Unified Heavyweight titles after upsetting Anthony Joshua in June of 2019.

Ruiz, was victorious earlier this year over aging veteran Chris Arreola on a Fox Sports/PBC PPV earlier this year, but has also had knee surgery, recently. Still, he seems like the logical/marketable fighter for Wilder to go to, if he wants to continue.

The larger point is how much does Wilder have incentive to fight on, when he clearly won’t get a title shot against Fury or Unified Heavyweight Champ, Oleksandr Usyk, in 2022? Further, Wilder just made massive guaranteed money of over $55 million for the last two Fury bouts and is obviously set, financially.

Now we’ll wait to see, what the Alabama native wants to do and when?