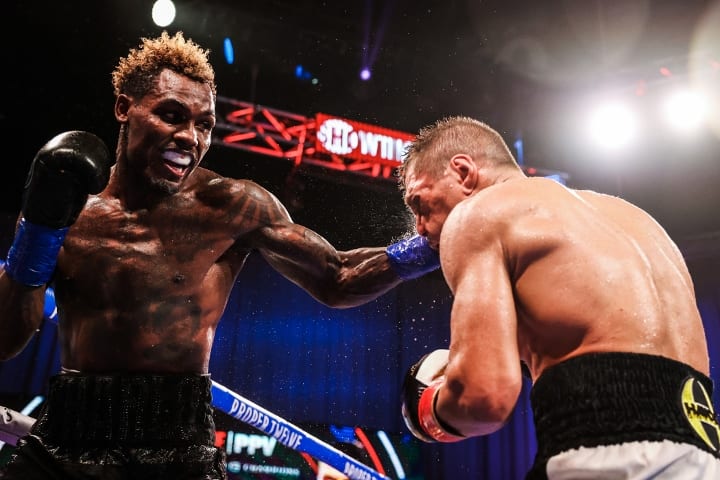 Charlo’s Trainer feels Canelo next makes the most sense

Jermall Charlo, fresh off his victory Saturday against Sergiy Derevyanchenko, is looking for someone to take on next.

Ronnie Shields, the trainer of the undefeated WBC champion, answered that question by stating that the next person should be Canelo Alvarez.

Keith Idec of Boxingscene reported that Shields feels that a contest with Canelo is the one that would be the most ideal for Charlo.

“I know Canelo’s going through some things right now with DAZN and with Oscar [De La Hoya],” Shields told BoxingScene.com following Charlo’s victory over Derevyanchenko. “So, you know, maybe if they get their situation together, they can sit down, they can call Al [Haymon], and we could make the fight. That’s probably the fight that makes the most sense for Canelo. I think for Canelo that makes the most sense, and for Jermall.”

Ronnie Shields: Jermall Will Fight Canelo At 168, 175, Wherever He Wants https://t.co/8cBT9UBeLU pic.twitter.com/fCG38ifeuI

Those “things with DAZN and with Oscar” Shield’s mentioned are just a mere refiling of a lawsuit Alvarez has for $280 million for breach of contract that T.J. Rives wrote about here Tuesday.

Now if you’re asking yourself about Charlo, currently at 160 pounds, and Alvarez, who has been fighting at 168 and, most recently, 175 pounds, Shields mentioned that weight doesn’t matter.

For any of this to happen, it will take whatever is going on with the Alvarez suit dust to settle. The WBC gave Alvarez the franchise tag before Charlo won his hometown bout victory against Brandon Adams last June in Houston, Tx. elevating the “interim” status for him. The WBC also had delayed a purse bid for Alvarez to take on Avni Yildrim that has pushed back to October 6 to be taken care of as well for the vacant 168-pound title. Whether any of this takes place for Alvarez with the lawsuit looming will be determined.

For Charlo, that fight makes sense if Canelo becomes free from the Golden Boy?DAZN or if they allow that arrangement to happen. The lawsuit that Alvarez contends that DAZN wants him to fight Gennadiy Golovkin a third time, which he has made clear doesn’t want to happen.

Until then, expect Chris Eubank Jr. to be the next name mentioned for the next defense of Charlo sometime next year.