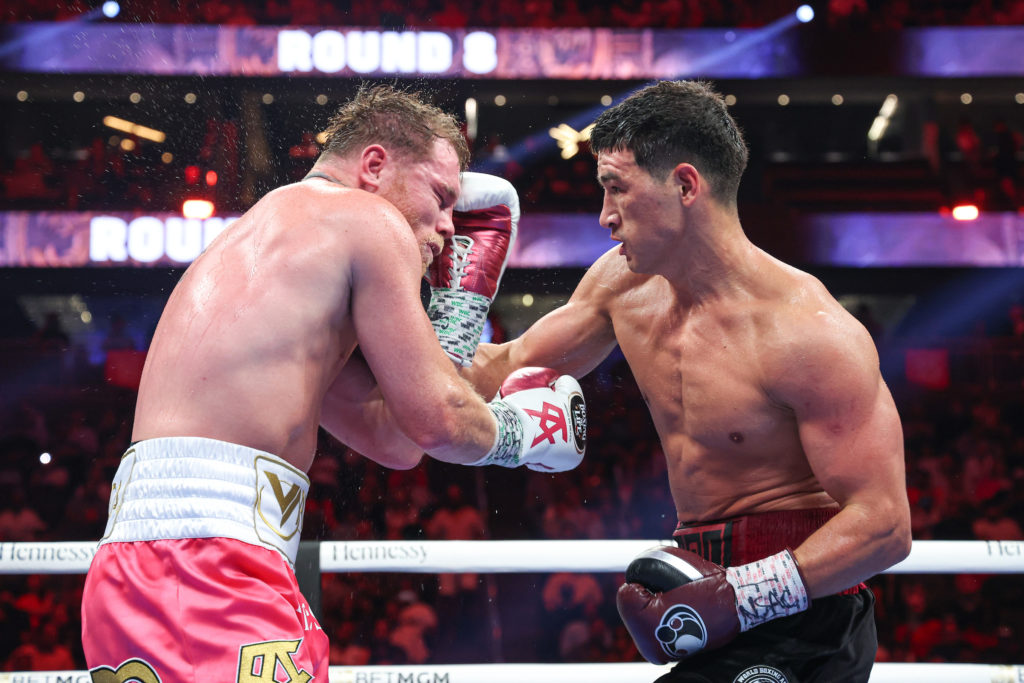 He simply “bit off more than he could chew.” Yes, that Southern states cliche’ has been used for decades in life and in sports, but on Saturday night Canelo Alvarez found out the hard way that sometimes your appetite can get you into trouble.

It was that appetite that had Canelo planning on not defending his 168 lb. undisputed titles, but rather on trying to become an undisputed champion at light heavyweight by first knocking off WBA world champ Dimitry Bivol.

But, on this night in the T-Mobile Arena on the Las Vegas strip, the younger, bigger, talented Russian put on a tremendous display for which the great Alvarez simply had no answers.

Instead, it’s the still unbeaten Russian Bivol, using his size and athleticism with a strong jab to control the fight, that frustrated Canelo and saw Bivol get the 12 round unanimous decision win.

It was officially 115-113 on all three cards, but truthfully, that was generous to Alvarez.

He got decisively beaten, including in the closing rounds.

Yes, Bivol deserves full credit for his gam plan and how he executed it, but the bigger story on “Cinco de Mayo” weekend in Las Vegas was Alvarez being unable to solve a bigger fighter. This, while suffering his first loss in almost nine years in the process. That came to Floyd Mayweather, whom he also couldn’t solve, in a 12 round decision in September 2013.

The appetite for moving  back up from super middleweight to light heavy was due to Canelo having already scored a title win in the 175 lb. division. That was in November of 2019, as he beat an aging Sergey Kovalev for the WBO championship. But, it was a Kovalev who wasn’t near the fighter that he had been earlier in his career.

And, Alvarez was able to wear him down and eventually knock him out in the 11th round of their bout.

Now, fast forward to this night and with another Russian. A Russian who was much younger and yet to be beaten in his previous eight title fights. And, Bivol was simply better than Canelo round after round.

Bivol never got careless or over-anxious and even when Canelo was able to land, he wasn’t able to sustain offense. Instead, he got counter-punched and at times hit with multi-punch combinations, by a stronger fighter with more reach.

Clearly, by the middle of the fight when Bivol had won at least four, if not five, of the first six rounds, there was frustration on the face of Alvarez. And, while he had some effective moments from there on, Bivol refused to get rattled and continued to land more consistently and aggressively.

The only doubts became what had been debated before this fight took place- would Bivol be able to win a narrow decision in Las Vegas over Canelo?

Well, he did that. And, He did it in so in no small part, because he fought well in both of the final two rounds to secure the victory. It was smart strategically and at the same time, a sign that he was just the better fighter on Saturday.

Again, it’s not over exaggeration to say that the Russian has pulled off one of the biggest upsets in boxing in the last 3 or 4 years by defeating arguably the top non-heavyweight in the entire sport over the last decade.

Now, we can’t say that what we saw was a total shock. It wasn’t, because Bivol’s previously demonstrated boxing ability, his size advantage and his excellent jab. Those were all discussed by us on the “Big Fight Weekend Preview Podcast” and a lot of boxing observers and media for this week kept pointing it out leading up to Saturday.

And, all of those things were on display by the Russian in the Vegas ring Saturday night.

So now it’s back to the drawing board for Alvarez, who said in the ring after the fight to DAZN that he will invoke the one-way rematch clause in the event that he had lost. So, look for the Bivol second bout to happen again, as soon as September. Thus acknowledging that Canelo’s proposed trilogy fight with Gennady Golovkin is on hold, again, and once again, may never happen at all.

To wrap Saturday night up, Alvarez’s only real hope in a rematch with the Russian star, especially after what we saw for 36 minutes Saturday night, would be that Bivol either doesn’t take his  training seriously and/or comes into the fight careless and reckless and Alvarez is somehow able to catch him.

Other than that, it’s tough to see how a  5′ 8″ fighter who’s been moving up for a third or fourth weight class for years and is now at 175 lb. is going to be able to defeat big, talented light heavyweight world champion like Bivol. A Bivol with the skill set, composure and now having been on the big stage to execute it that still stands in his way.

Saturday night certainly demonstrated, blatantly, that Alvarez is mortal and has the same real issues moving up to fight with a bigger, young, talented fighter the same as numerous others have before him.

Yep. His appetite was too big.

And, to Bivol’s credit, he was that bigger, better fighter in pulling what may end up being the boxing upset of 2022.