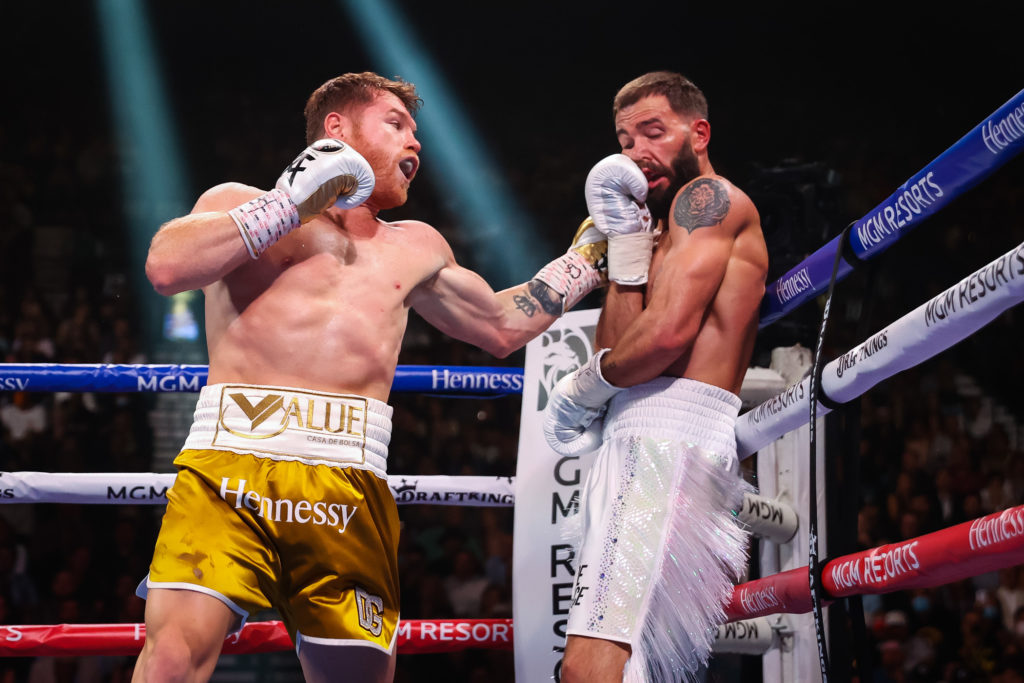 In addition to continuing to deliver in the ring, new Undisputed Super Middleweight Champ Canelo Alvarez delivered for Showtime with PPV audience in the U.S.

Boxingscene.com Sr. Writer Keith Idec reported Thursday night that he’s learned that Alvarez’s 11th round TKO of Caleb Plant registered around 800,000 purchases through Showtime, not including all streaming numbers.

That total includes only domestic buys in the United States through cable and satellite operators, as well as digital sales that have consistently accounted for an increasing number of buys in 2021.

The total buy rate for pay-per-view events often takes many months to tabulate.Numerous industry insiders indicated to BoxingScene.com before Alvarez fought Plant on Saturday night at MGM Grand Garden Arena in Las Vegas that their fight would draw somewhere between 500,000 and 600,000 buys, in part because Showtime’s four-fight telecast directly competed with UFC 268 on pay-per-view.

The 31-year-old Alvarez is boxing’s biggest star in the U.S., but he hadn’t competed exclusively on pay-per-view since his 12-round, majority-decision victory over rival Gennadiy Golovkin in their middleweight championship rematch in September 2018 at T-Mobile Arena in Las Vegas. The second Alvarez-Golovkin battle reportedly produced approximately 1.1 million buys.

As Idec indicated, that number doesn’t include the Mexican PPV audience which was easily in the hundreds of thousands more. And, one of the “sticking points” with Alvarez, his team and reps from Premier Boxing Champions was allowing Canelo to keep either all or most of the pay per view dollars from his home country, which represented tens of millions of more revenue.

Hear us discussing Canelo’s Undisputed win and the PPV success on the Big Fight Weekend Podcast with Marquis Johns and Michael Rueda of Vegas Sports Today by clicking below:

Alvarez, now 57-1-2 37 KOs, dominated the previously unbeaten Plant Saturday night in Vegas before wearing him down and stopping him with two knockdowns in the 11th round. With the win, Alvarez became only the sixth Undisputed champion in any division in the “four belt era,” including the WBC, WBA, IBF and WBO world titles.

Now, we wait to see if PBC and Showtime, who apparently don’t have rights to a second Canelo fight, will be able to convince him to stay with them and their PPV model for a 2022 title.

Zurdo Ramirez In Action In San Antonio Against Gonzalez
David Benavidez On Having Fans Back- “Can’t Wait To Get In There”
Advertisement
To Top
We use cookies to ensure that we give you the best experience on our website. If you continue to use this site we will assume that you are happy with it.OkNoPrivacy policy