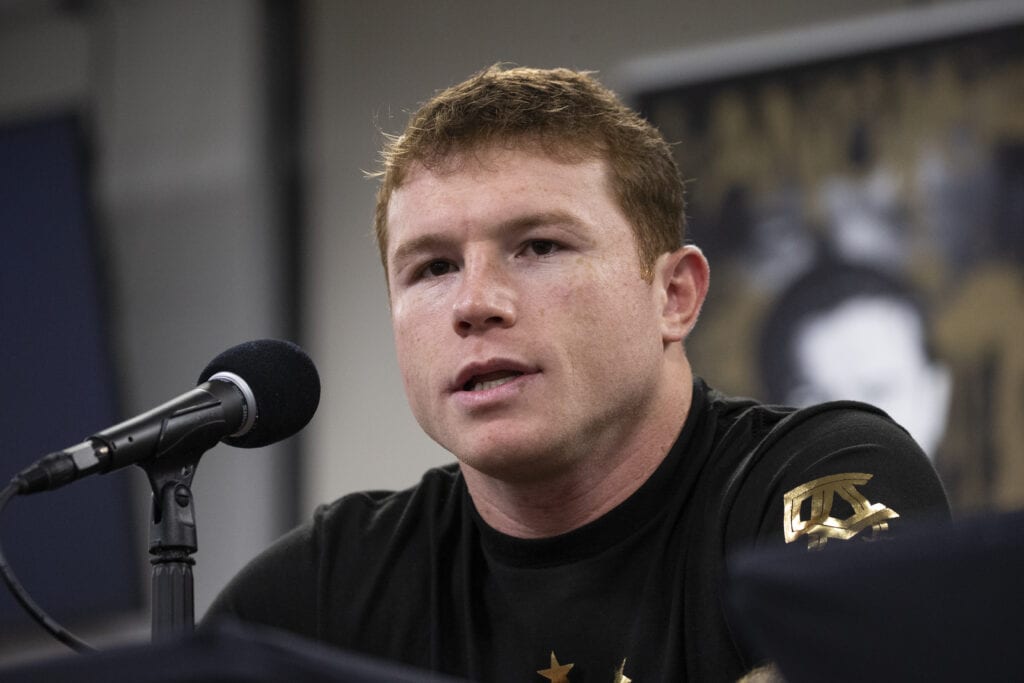 Canelo On Billy Joe Saunders Fight- “You Have To Be Patient”

Four division world champ and Unified Super Middleweight title holder Canelo Alvarez continues to prepare for his next title fight with WBO 168 lb. belt holder, Billy Joe Saunders of England. And, Alvarez knows for all the talk about needing to be impressive in front of a massive crowd in Texas, patience will also be a key.

Alvarez spoke this week with Kevin Iole of Yahoo Sports via video chat about his camp, the fight and some of his strategy for the May 8th bout at AT&T Stadium in Arlington, TX,

This is my interview with @Canelo with a brief guest appearance a la The Penguin or The Joker, from the great @EddieHearn https://t.co/eYyqwq7QZu

First, Iole got Matchroom promoter Eddie Hearn to confirm that they have already sold some 60,000 tickets inside the Dallas Cowboys massive football stadium for the bout next month. Hearn said that Cowboys owner Jerry Jones and Texas officials will apparently still allow another 5-6,000 tickets to be sold, if there are takers.

Canelo, 55-1-2, drew a large crowd of over 11,000 for his December win in San Antonio’s Alamodome against WBA champ Callum Smith. His February defense against Avni Yildirm at the Miami Dolphins Hard Rock Stadium had fewer than 10,000 in actual attendance for the essentially “stay busy” bout.

The unbeaten Saunders is a bigger test and Texas being much nearer to of Alvarez’s Mexican fan base will increase the interest in this one, as well.

Next, when Iole asked specifically about Alvarez having had to figure out crafty fighters like Erislandy Lara earlier in his career and whether it will help with Saunders’ style? He told Iole,

Alvarez and Saunders were to have fought last May before the Covid-19 pandemic shut the sport down. In the meantime after, Saunders got himself indefinitely suspended by the British boxing Board of Control for comments he made on a social media video joking about domestic violence.

The combination of Alvarez being this active, the live gate from a crowd of 60,000 or more fans and the uptick of subscribers added for DAZN in the deal to televise this and subsequent fights, will be mean this will arguably be the most lucrative fight for any fighter world-wide since the Covid 19 pandemic began last March.