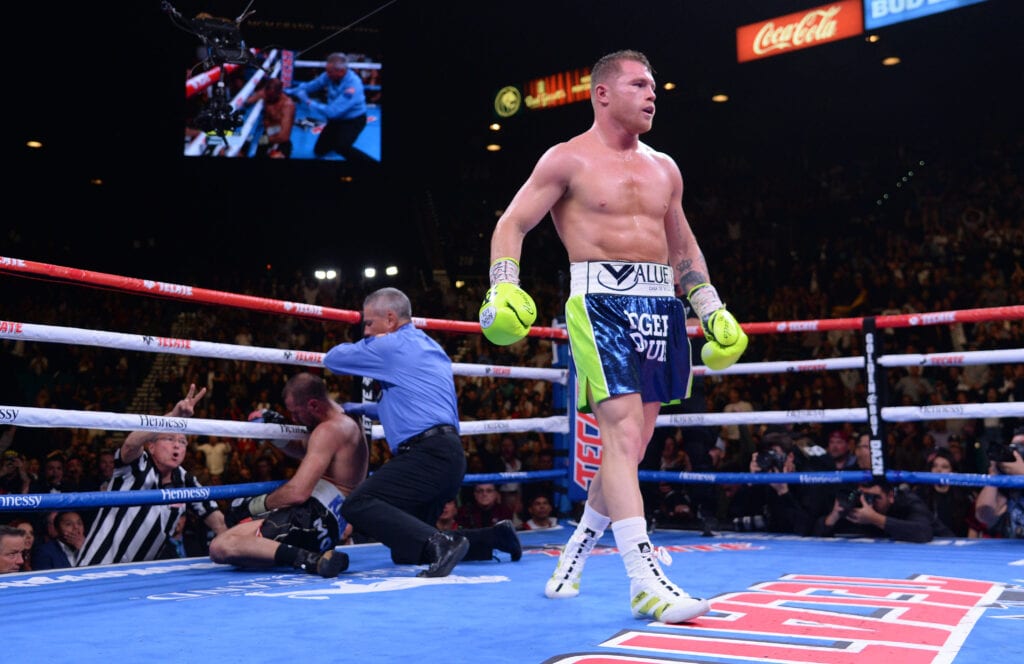 The financial numbers are in for Canelo Alvarez’s successful bid to win a version of the Light Heavyweight title earlier this month. And, in terms of the buying public in Las Vegas, it’s disappointing news.

Alvarez knocked out Sergey Kovalev in the 11th round on November 2nd to capture the WBO Title, but he did so in front of 30+ %  fewer fans then his previous fight there in May.

And, when you compare it to his two showdowns with Gennady Golovkin in 2017 – 18, this latest bout in Vegas came up way short at the box office.

First, Dan Rafael, of ESPN had the specific numbers that only 10,000 tickets were sold for the bout November 2nd at the MGM Grand.

Canelo Alvarez’s 11th-round KO of Sergey Kovalev to win a light heavyweight title Nov. 2 at the MGM Grand in Las Vegas generated a live gate of $8,173,920 from 10,005 tickets sold, according to figures released by the Nevada State Athletic Commission…. https://t.co/0xWSRbR5BN

That represented a live gate of $8.2 million. And while that seems significant, it actually means that Alvarez’s victory over the Russian Kovalev represented 5,700 fewer tickets being sold than his middleweight title defense against Daniel Jacobs in May at the T-Mobile Arena.

Now, by comparison, the Jacobs fight was held Cinco de Mayo weekend, which is a massive Mexican holiday. And, it is well known that Vegas big fights the first Saturday in May have had humongous crowds with a Mexican or Mexican-American drawing card for them.

There was also frustration on Alvarez’s part, his promoter Golden Boy and the DAZN streaming service that a fight could not be made for Mexican Independence Day weekend in September for Las Vegas. That’s when the two Alvarez – GGG fights were held in 2017 and 2018 and both of those bouts sold 16,000 or more tickets.

Now, for the even worse news on the revenue front Canelo’s fight generated less money than the $8.7 million off the live gate for the Jacobs fight in May, but it was horribly low in comparison to the two Mega fights with Golovkin.

First, the rematch fight in September of last year had $23.5 million in Revenue off the live gate and the September 2017 fight represented a tremendous $27 million dollars in live gate revenue. Now, this was to be expected, as Golovkin was the unbeaten Undisputed Middleweight champ at that time of the first fight and there was massive interest in seeing it live.

Further, this obviously indicates that the public would have thirst for a Canelo – Golovkin third fight and the two Canelo fights the public was given in 2019 were nowhere close to the same interest level. And, when you take into account that DAZN has signed Alvarez to a deal for over $350 million for 11 fights, they have to start making huge money for them.

And, Matchroom Boxing promoter Eddie Hearn was alluding to GGG being on a short list of possible Canelo opponents last weekend.

Now, we know the truth about the money, too and it may force Canelo and all involved with him to take the bigger payday to make up for what’s not been made in 2019.