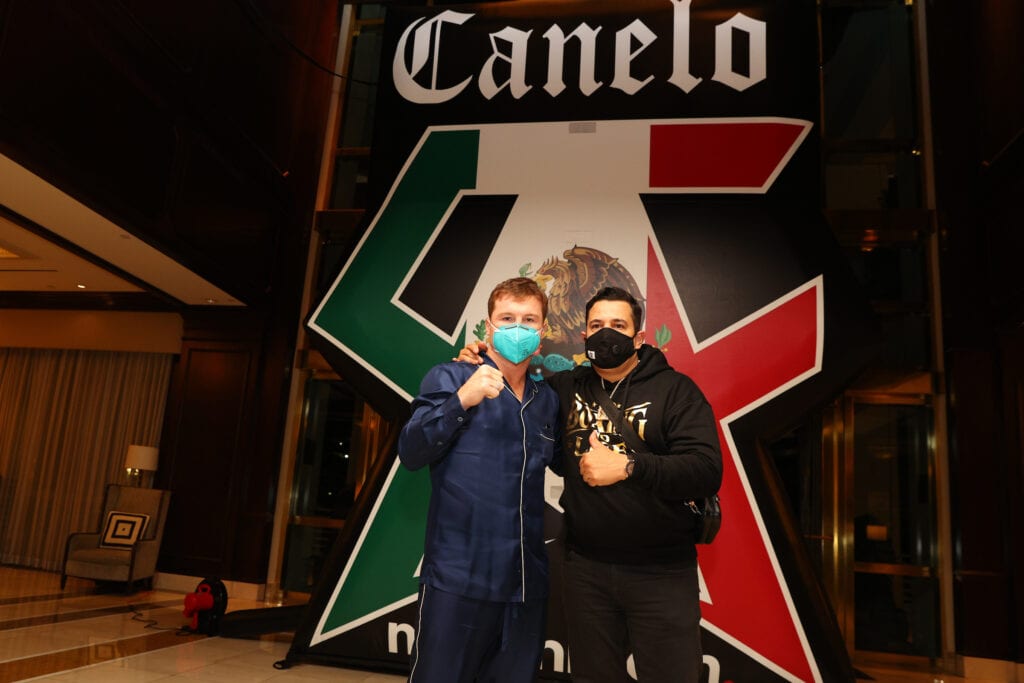 And, it’s no big surprise that everything Alvarez does this week in a new locale’ for he and those promoting him will be a big deal.

Observe his grand entrance into is Miami area Hotel,

In addition to walking up the massive staircase, he and everyone around could gawk at the huge wall mural of Canelo and his lightly regarded challenger, Avni Yildirim.

Alvarez is heavily favored to dominate the Turkish Yildirim in a fight that is little more than a “stay active” bout, while keeping on a time line to fight at least two times more in 2021.

Alvarez is slated to be in the ring just over seven weeks after he last fought England’s Callum Smith in December, while scoring a dominant 12-round decision win at the Alamodome in San Antonio, Texas. That victory in front of some 10,000 socially distanced fans garnered Canelo the WBA 168 lb. title and solidified him as the man to beat at Super Middleweight.

Then, Matchroom Boxing and promoter Eddie Hearn moved very quickly to do a deal with Canelo for his next bout in February. That was originally being discussed for his home country of Mexico and an outdoor stadium in Guadalajara. However, Mexican Health officials and organizers refused requests from all involved to have fans present at the title fight.

That’s where South Florida came into play, as Hearn and Matchroom were able to secure Hard Rock Stadium, the home of the Miami Dolphins which seats over 70,000 for football. It is believed that at least 12,000 fans or more will be allowed socially distance for Saturday night’s bout.

It is the first time that Alvarez has ever fought in the state of Florida. And, unlike his hastily scheduled December fight being much closer to his Mexican fan base, it will be something to keep an eye on as to whether he’s fans from all over the Southwestern U.S. and Mexico will travel to Miami, or not, for this one?

For now, we do know that Canelo, who is regarded as one of the top pound-for-pound fighters in the sport over the last decade, will get plenty of royalty-like attention during his stay in the Sunshine State.