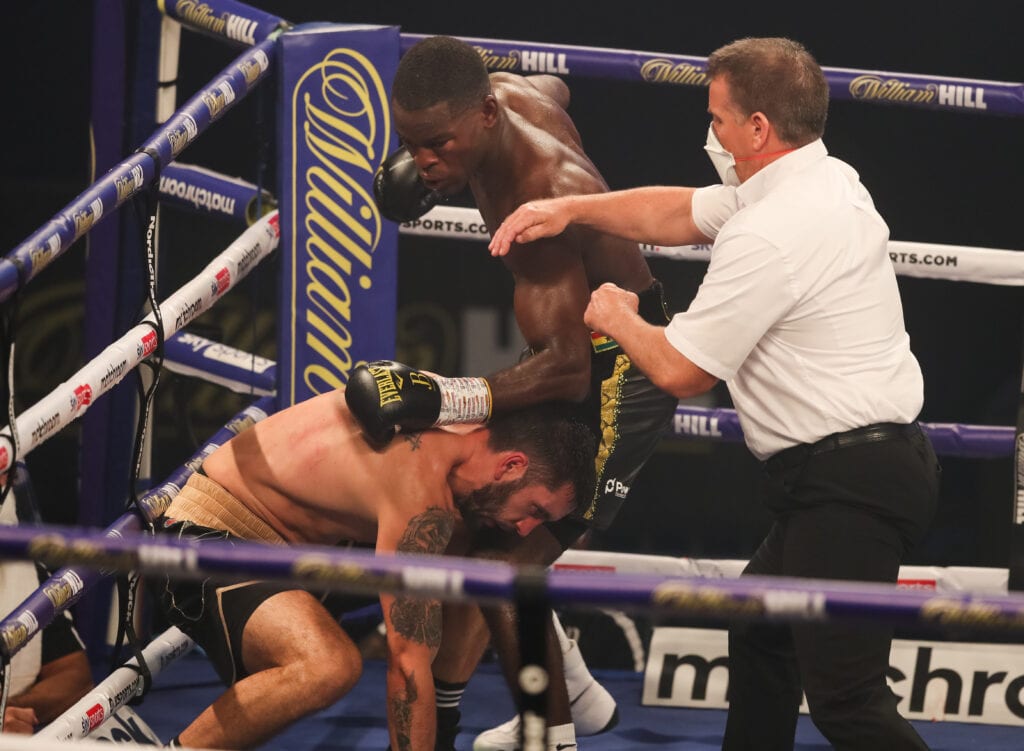 Joshua Buatsi, on Sunday night, came through and stopped tough Croatian Marko Calic in seven rounds to retain his WBA International Light-Heavyweight Title in the main event at the Marshall Arena in Milton Keynes, live on Sky Sports in the UK and DAZN in the US.

The 27-year-old preserved his perfect professional record with a display of grit and firepower as he overcame the Calic’s aggression in the opening rounds, then explosively forced the stoppage to bring up his 13th straight win. This was a tough contest for Buatsi as Calic could land effectively, causing a swollen left eye in the early rounds.

Just business as ever ✔️@boxingbuatsi returns after 400 days out the ring to stop the game Calic in seven and retain his WBA International Light-Heavyweight Title ?

“His jaw was broken,” said Buatsi afterward. “In the third round, I felt my swelling. I thought ‘damn!’ You do what you’ve got to do. He went southpaw, so I looped the right hand. He hid it, but he was hurt. This guy said he was coming to burst the Buatsi bubble. I was here to defend it.

“People didn’t know about him, the spectators and the public, but in our camp and within our team, we knew he was a good fighter. I was out for 400 days. We bit down on the gum shield, and we got the win. This is a gentleman’s sport, big credit to Marko Calic. I wish him nothing but the best. I wish him good health—maximum respect to him.

“He came in, and he gave me a good run for my money. I hope he gets home safely in Croatia. It was a hard fight, but I learned. He didn’t just come to make up the numbers. He was a good fighter, heading into our fight unbeaten. I couldn’t see his right hands, I adapted. I dealt with it. If the World Title fight in 2021 opportunity is presented, and I’ve had the right fights, then absolutely.”