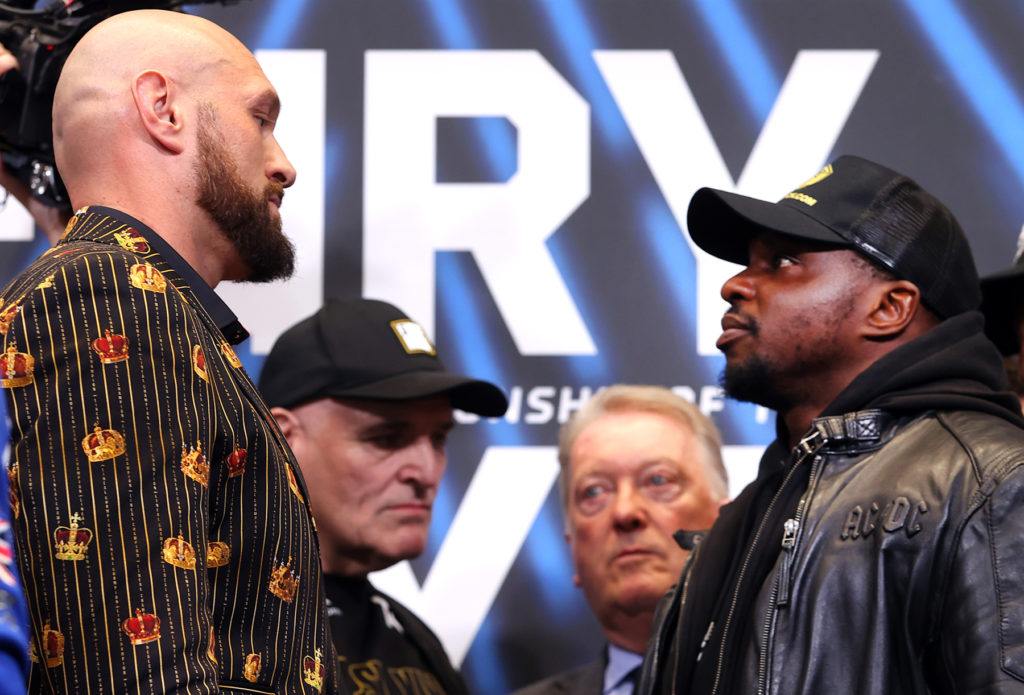 Boxing Bullied Out Of Kinahan Business Just Before Fury-Whyte

(With the Tyson Fury-Dillian Whyte WBC heavyweight title fight approaching tonight at Wembley Stadium, our colleague David Payne has his thoughts on the biggest story out of the ring in U.K. boxing, the controversy around fugitive Daniel Kinahan and his organized crime family being connected to the sport. More specifically, his connection to Fury. Here’s his item originally appearing on his site boxingwriter.co.uk.)

Fighters always attract a troupe of colourful characters. Their money, and their potential to be parted from it, even more. Sycophants. Chancers. Criminals. Sugar Ray Robinson, the greatest of them all, engaged a parade of the bizarre and the harmless. From a person with Dwarfism, employed for no discernible reason beyond the novelty of their height, to a pair charged with whistling while the shimmering Robinson worked – if Gilbert Rogin’s obituary of April 24th 1989, by way of coincidence, is to be taken as a gospel of the period.

The great man danced in an era in which dressing room visitors were far from harmless, and in a shady world where the advice of ‘advisors’ was always followed. Boxing’s enduring chaos is fertile territory for organised crime. In the 1950s, a period oft considered a golden age, the Mob were manifestly the king makers within the sport.

On the eve of the heavyweight title fight between Tyson Fury and Dillian Whyte, Daniel Kinahan’s growing influence within boxing’s many lucrative shadows, including a documented advisory capacity in Fury’s later career, has finally been arrested.

If not the man himself. It is a story perhaps only at its beginning.

Boxing remains a peculiar ecosystem. One without fences. Few alarms. Welcoming all, from the virtuous to the sociopathic, the incompetent to the ingenious, and rarely sanctions those who transgress their most ambivalent of rule books. It is why nobodies can insert themselves so easily, all they need is the ear of one fighter, and why corruption and incompetence are free to flourish.

From those Grey men in overcoats of the 1950s to the Cleveland numbers runner of the 70s, Jungle Rumbles to Arabian nights in despotic states, boxing is, and always has been, all about the money. And it doesn’t care how dirty the bills. Daniel Kinahan’s money, it is widely reported, is dirtier than most.

It would’ve stretched toward the satirical had boxing, infested with performance enhancing drugs as it is, with the warmth of oily gold coursing richly through its veins, turned away the Irishman’s particular type of laundry. But it really should have.

There is guilt at boxing’s heart. Boxing damages even those it elevates and those it saves. If boxing is to be considered a coherent entity and not merely a wilting bouquet of men’s varied motivations that it really is. This conflict in all that are drawn to watch it encourages a type of unwitting negligence, an apathy toward the crimes committed on its participants by those who operate in their orbit. Integrity, empathy and the pursuit of fair play can seem juxtaposed concepts alongside the idea of two people hurting each other for money. The sacrifices of those who climb between the ropes elevates them beyond their contemporaries in other sports. A reality that carves legends into our psyche in a way the greats of football or tennis never can. Pele may be Pele. Borg Borg. But they cannot be as compelling or transcendent as Muhammad Ali. Tyson.

The combination of the vulnerability of many of boxing’s participants, the lack of infrastructure governing the sport, present in varying degrees of competence in most global sports, and the eternal attraction influential men have for the company of prizefighters, enables infiltration by figures like Kinahan. His is a path trodden by dangerous men before and one as yet unblocked to prevent others in the future. Boxing’s next challenge, now it has been forced to recognise the dangers associated with the presence of Kinahan, is to introduce measures to resist the lure of similar people in the future and protect that most delicate of ideals, the sport’s integrity.

An idealism boxing is manifestly not organised enough to achieve. Alas.

Praise to the Irish press who chased this story from the beginning and to Alan Dawson who had the courage to report candidly when many turned their cheek on a plainly ill-advised relationship between fighters, promoters, sanctioning bodies and the dark underworld Kinahan emerged from.

The story has much more to tell.