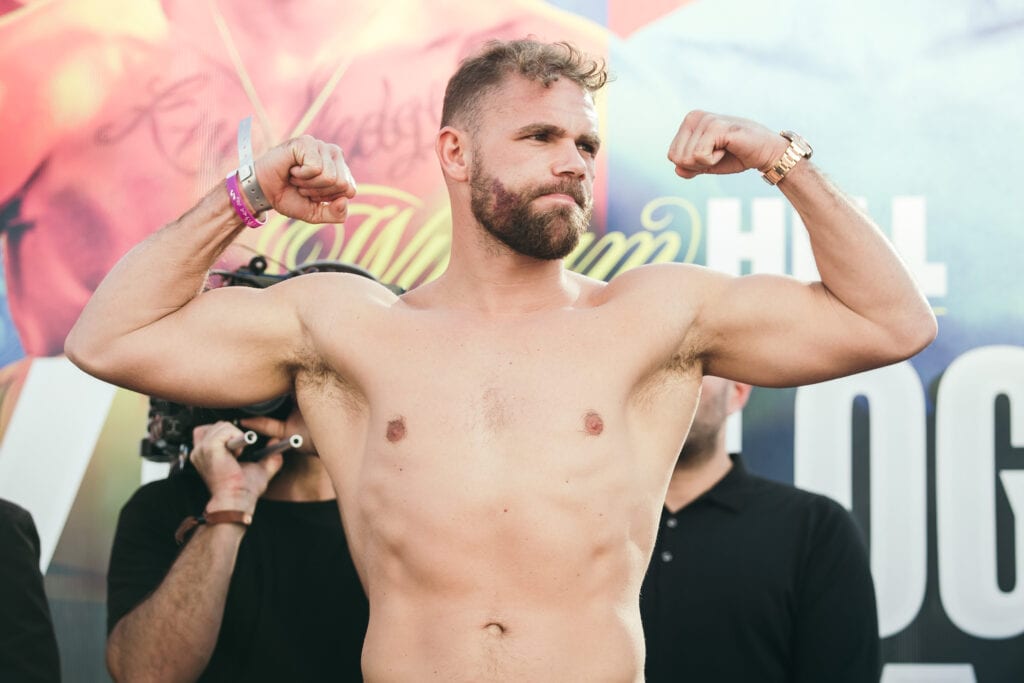 It’s fight week in “Big D,” as Canelo Alvarez gets set to put his Unified Super Middleweight titles on the line against England’s unbeaten WBO Champion, Billy Joe Saunders. And while Canelo was ready to promote the fight some at AT&T Stadium on Tuesday, the Brit was a “no-show” and the reason behind it is a bit comical.

Saunders is apparently protesting the size of the ring at massive football stadium in Arlington for Saturday night’s 168 lb. main event showdown.

Saunders’ father, and one of his cornerman, tried to make clear on Tuesday morning that they are willing to walk away from the multimillion-dollar battle Saturday, because the proposed size of the ring is only 18 x 18 feet. They want the ring to be 25% bigger, somewhere around 24 x 24, to obviously give Saunders a better opportunity to use movement, his jab and most importantly, stay away from Canelo.

For his part, Alvarez did a couple of interviews on Tuesday and made clear that he has no problem with the ring size being upped from 18 x 18 and that those details would be worked out through his promotion, Matchroom Boxing (who promotes Saunders) and the world boxing governing bodies that are sanctioning fight.

As we referenced, they were supposed to do a promotional photo op togetheer inside of one of the massive suites of AT&T Stadium, but Saunders was a no-show and Canelo was left to mug for the cameras, himself and also, some with his trainer, Eddy Reynoso. Take a look.

A further development came also on Tuesday afternoon in English Super Middleweight John Ryder, who confirmed that he was on his way to Dallas to be the potential backup opponent for Canelo if needed.

“Put it this way, it’s a bit earlier than scheduled, but I’m definitely going to pack my gum shield and protector, just in case. That’s the sport we’re involved in. Especially with Covid, how many times have you seen the fights pulled last minute with positive tests coming through and main events falling through,” Ryder told the site.

I’m going there tomorrow (Wednesday) what’s a couple of more ounces for a protector and a gum shield. I’m taking my gloves and my boots, anyway.

I was going out there anyway to be a bit of promotional work for my own up and coming fight. So, I’ll be out there regardless. If not (fighting), I’ll be spectating….I’m looking forward to a nice few days in Dallas. Was hoping to watch a good fight. But, you never know. I might end up being in a good fight.”

First, just as he did last December in Texas, Ryder was the backup for former WBA world champion Callum Smith, if there had been a positive Covid test that could jeopardize the main event. However, he also made clear that he’s been made aware of Saunders complaining about the ring and he might be needed for that reason.

Ultimately, this is either: complaining by Saunders, camp trying to get under the skin of Alvarrez, which by the way, won’t work.

Or, it’s more of an indication that Billy Joe and his people realize he’s actually going to have to step through the ropes with a world-class fighter, who’s about to “school him” the same way that he schooled Callum Smith last December in San Antonio’s Alamodome.

And, the biggest component is that Saunders is about to get the largest payday of his career, as it’s believed he will make close to $10 million between his guarantee and share of the DAZN streaming numbers particularly for the U.K. audience.