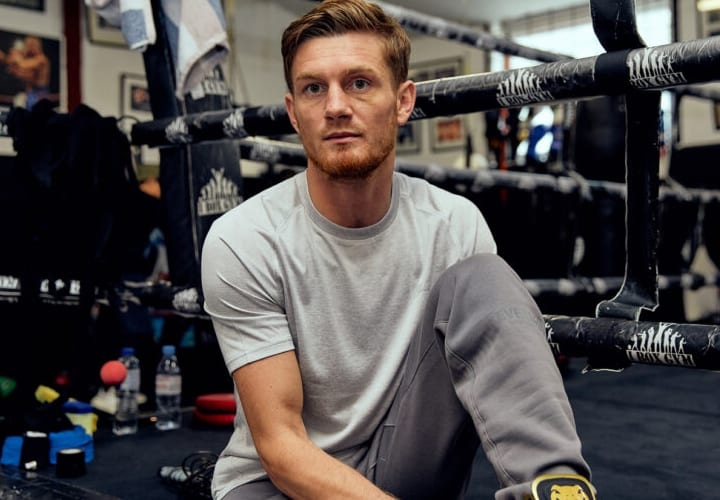 Archie Sharp Looks To Make A Statement With Ring Return

His fight gone on short notice is usually a source of great anguish for the affected fighter concerned but for Archie Sharp a few weeks or so back it was a blessing in disguise and he was more than happy to be absent for the events taking place in Telford.

The former WBO European champion was set to fight Marcio Soza for an upgraded WBO Global belt at super featherweight but, shortly before he was set to depart for the Shropshire town he received news that the Nicaraguan had been struck down with Covid-19.

Now, normally this would spark a flurry of angst and a rapid ring-around in search of a new opponent. But for Sharp, as much as he would never wish a virus on a ring rival, the pull-out was a stroke of real fortune.

Because instead of heading to the vicinity of the Telford International Centre, he made his way to the local maternity ward to witness the birth of his new baby daughter.

Three kids indoors and a fourth child in @ODennismccann at the gym 👨‍👦@archiesharp95 certainly hasn't picked the quiet life 😂 pic.twitter.com/NN7g8hU5gM

A case of every cloud and all that… Or as Sharp himself now regularly says, “trust the process”.

“I trusted the process, once again, and what happened? My little girl was born,” beamed the now father of three. “The fight got cancelled a few days before and on Thursday we were supposed to be leaving at 6pm to go to Telford. Instead of that at 6pm I was in the hospital waiting for my little girl to be born.

“So it worked out for me and now I am happy to be back fighting at the Royal Albert Hall, in London with some fans and my last outing there was a big knockout.”

Sharp, 19-0, is indeed back in action next Saturday (July 10) at the historic West Kensington concert hall fighting for the WBO Global belt. Unfortunately, Soza is enduring a prolonged struggle in his Covid recovery and he is replaced by the Mexican Diego Andrade Chavez (13-4-2).

“Like I say, I just trust in what is going to happen and trust the process,” added Sharp on the wheel of fortune stopping on his number. “I keep saying it because it is true and I’m just thankful and grateful for the way everything has worked out and now I am just looking forward to July 10.

“Now I am back at the Royal Albert Hall, where I had my famous knockout win over Declan (Geraghty in September 2019),” a fight where Sharp was struggling to find a rhythm against the tricky Dubliner.

“I was easing into it,” retorted Sharp. “Warming up. He was doing well and he is a good fighter. What you have got to realise with Declan is a lot of people avoid him because he is good and his amateur pedigree was unbelievable.

“He is all wrong for a lot of fighters but we took the fight and I was adamant I was going to knock him out. I think that showed in the first couple of rounds because I didn’t get going as I just kept thinking about the knockout. Then I got a little cut and my coach said I had to go to work, so I found a sweet shot that paid off.

“It was a great shot on a great night and now we are back on July 10 to do the same. There is a spark there with me now.”