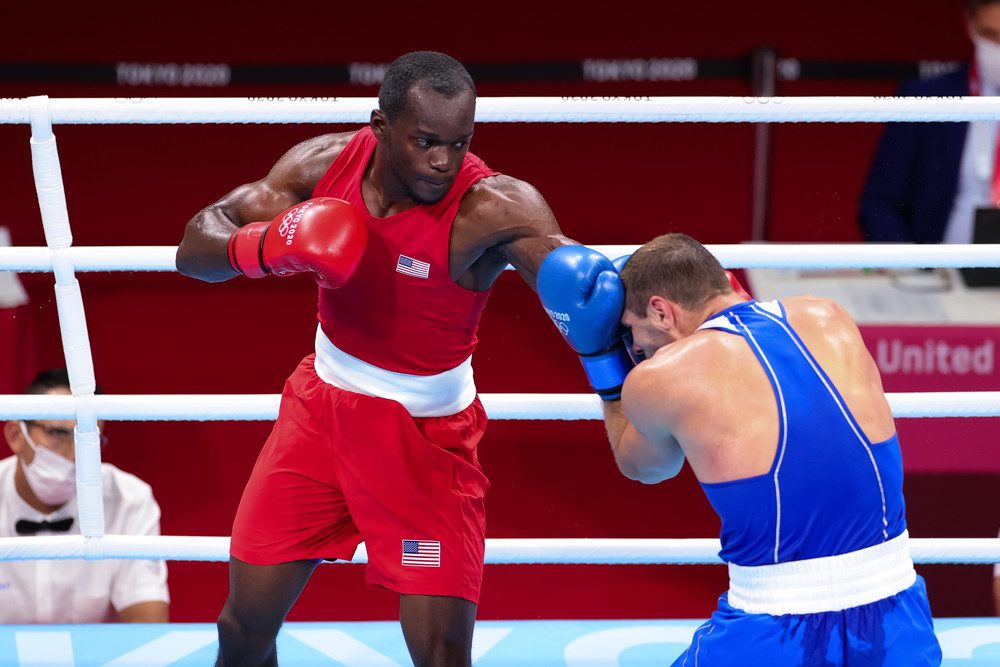 The U.S. men’s boxing win streak ended Thursday afternoon at the Tokyo Olympics, when Middleweight Troy Isley lost a narrow decision to the Russian favorite to win the Gold Medal.

Gleb Bakshi rallied to win the third round on the judges tallies and it gave him a 3-2 victory over the Virginia native Isley in their round of 16 fight in the Kokugikan Arena.

Isley (shown above in an earlier fight) got the better of the Russian in the opening round to take the lead, but Bakshi, who is the 2nd seed Middleweight bracket, got the better of the action in the center of the ring in round two. Bakshi was swelling under his left eye, but used a body attack and scored with a good left hook along the ropes on Isley in the final :30 of the three round fight.

About a half hour later Thursday afternoon, the USA got back in the win column, when Super Heavyweight (over 201 lb.) Richard Torrez of Tulare, CA, scored a shutout, unanimous decision over Algeria’s Chaouib Bouloudinats. Torrez scored a first round knockdown on the Algerian and never looked back, impressively winning each round and getting 5-0.

Torrez is the U.S. team captain and will now face Cuban Danier Pero in the Super Heavyweight quarterfinals later this week.

The USA “medal hunt’ is on, as Duke Ragan of Cincinnati was in complete control in his three-round Featherweight unanimous decision Wednesday over Kazakhstan’s Serik Termizhanov.

Ragan, who was favored to fight for the Gold, is the first United States men’s boxer to advance into the Featherweight quarterfinals, since Ricardo Juarez won the Silver Medal in that division at the 2000 Sydney Summer Olympics.

Cleveland native “Tiger” Johnson won for the second time in the Olympic tournament on Tuesday, when defeated Ablaikhan Zhussupov of Kazakhstan in their three round bout by a 4-1 decision. That also advanced him to Welterweight quarterfinals later this week.

Heavily favored Lightweight Keyshawn Davis of Norfolk, VA, who like Ragan has turned pro and won fights while being allowed to comeback and fight as an amateur in the Olympics, will be in action in the round of 16 coming later this week. In his first fight, Davis took apart Enrico La Cruz of the Netherlands Sunday with an effective jab and superior hand speed on his way to 5-0 unanimous decision to move on to his quarterfinals.