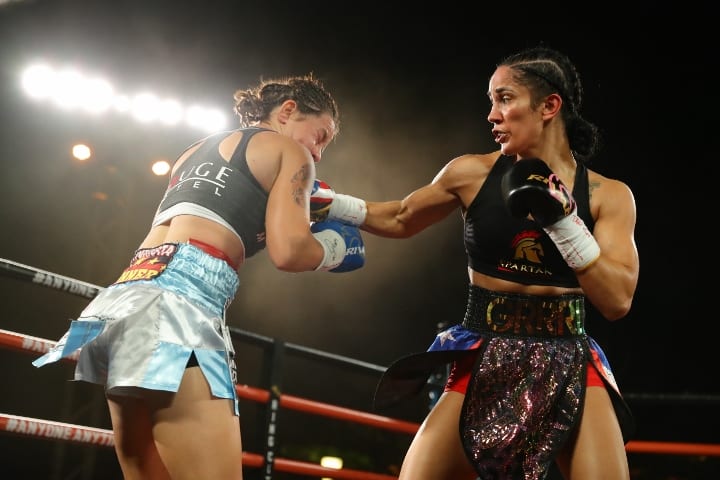 Seven-division champion Amanda Serrano was in action last night and closed out the show in spectacular fashion, stopping a very game Daniela Bermudez in the ninth round to close out the RIng City USA card from Plaza del Quinto Centenario in Old San Juan, Puerto Rico.

Serrano 40-1-1 (30KOs) was putting on a boxing clinic throughout most of the fight. Still, Bermudez 29-4-3 (10KOs) wasn’t up for the challenge, but as the fight wore on, was just being outworked and, in the ninth round, was put down with a combination to the body, which sent her down and unable to beat the ten count of referee Roberto Ramirez Jr. Serrano retained her WBO featherweight title, while picking up the vacant IBO and WBC belt along the way.

“When I saw the body shot—my coach Gary told me, two hooks to the body and that’s what happened,” said Serrano about the body shot knockdown for the after the fight.“We knew she was tough. She’s Latina, she’s from Argentina. We know that Argentine fighters are tough, and she was ready. I beat her to the body. Maybe I have to change my name to “Body Snatcher.”

Serrano’s mission after this fight is still to become undisputed at featherweight. She could pick up the WBC crown as original titleholder Jelena Mrdjenovich was named “Champion in Recess” by the WBC. Their paths will have to cross at some point as she still has the WBA title. Another name is for the IBF at featherweight as Sarah Mahfoud (10-0, 3KOs), who claimed the IBF strap in her most recent win last February in Denmark.

Serrano has now won 26 fights in a row dating back to 2012, and after last night, it didn’t look like anyone was going to get in her way of stopping that streak anytime soon. I still wish the fight against Katie Taylor last year would’ve materialized but here’s to a wait and see if that comes back in play.

Can Whyte Avenge Against Povetkin?
Carlos Gongora In Action on Andrade-Williams Card
Advertisement
To Top