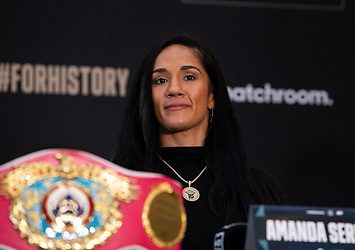 When the Jake Paul-Hasim Rahman, Jr. PPV fight card for earlier this month was cancelled, multi-division women’s world champ Amanda Serrano’s title fight in the co-feature was collateral damage and postponed, also. Now, comes word that Serrano will be back but with a different opponent and on a different continent.

Serrano was to have returned to the scene of her tremendous 10 round battle at Madison Square Garden in New York with Katie Taylor from back in  April. That’s when/where she had agreed to defend her WBC/WBO featherweight crowns against Brenda Carabajal.

The Puerto Rican born Serrano, 42-2-1, 30 KOs makes New York City her second home and had to be devastated to learn that she was not going to fight in the iconic Garden, in front of her home fans again.

Now, she will instead travel to Manchester, England to be part of the Joyce-Parker heavyweight main event card.

As for Sarah Mahfoud who’s from Denmark, she’s 11-0, 3 KOs and just recently scored her first title defense win by decision over Nina Meinke in April. Mahfoud has never fought outside of her home country.

Back to Serrano, she has had her profiled raised immensely by Jake Paul and MVP Promotions, They signed Serrano last Summer and had her on his undercard of his PPV in Cleveland. Serrano subsequently was the co-feature of Paul’s next main event at the Amalie Arena in Tampa last December.

She then participated in the biggest promotional and revenue generating ladies title bout ever. That’s when Serrano fought undefeated, undisputed ladies lightweight champ Katie Taylor in a thrilling 10 round battle, also at MSG. The Irish woman Taylor emerged wtih a narrow 10 round decision in a wild affair with big punches landed by both ladies.

It is believed that the Joyce-Paul card will also stream in the U.S. on ESPN+.