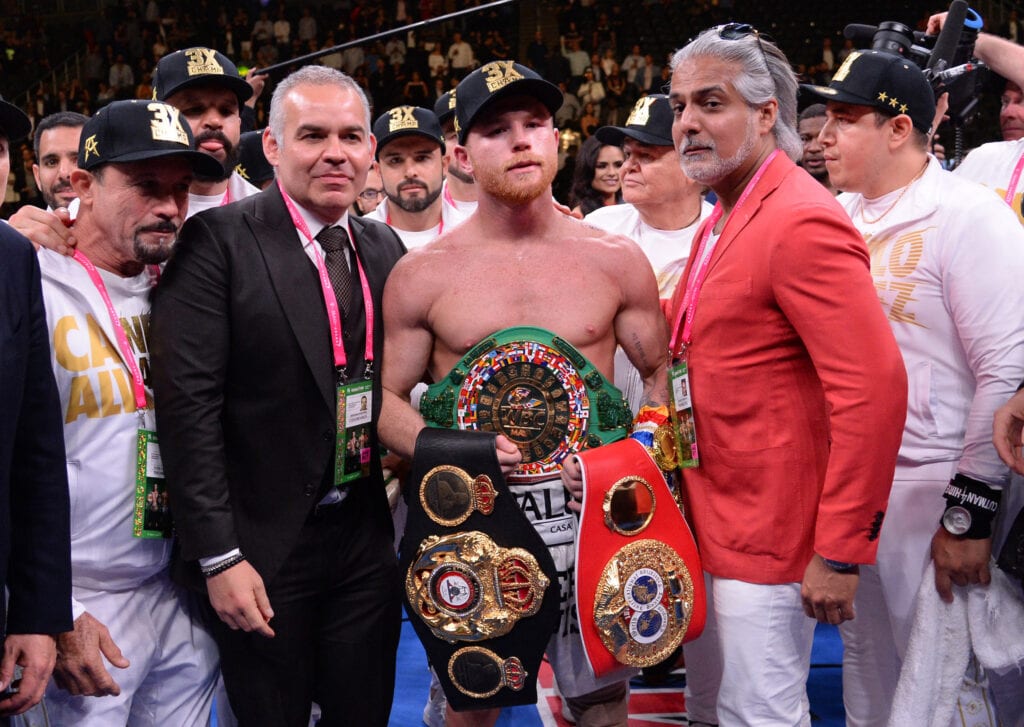 Canelo Alvarez late Thursday was stripped of the IBF 160 pound belt after negotiations to set up a match with mandatory challenger Sergiy Derevyanchenko failed to be reached.

ESPN’s Dan Rafel reported that the sticking point between both sides was money as according to his sources to ESPN. The streaming service DAZN, which airs Alvarez fights exclusively, had approved Derevyanchenko as an opponent with the stipulation that Alvarez takes as much as a $5 million reduction on his $35 million guarantees for his next bout against him.

In the report to ESPN, Derevyanchenko promoter Lou DiBella did not want to explain the details of what happened with Alvarez promoter Golden Boy on Thursday but did tell ESPN: “I will confirm that we did not reach a deal by the IBF deadline.”

With Thursday's deadline for @canelo-Derevyanchenko deal missed, & @GoldenBoyBoxing failing in attempt to do an end run around the fight, the IBF stripped Canelo of its 160 belt, paving way for D'chenko to face @GGGBoxing for it. My detailed story: https://t.co/fgtU9ROU5j #boxing

After the latest extended deadline at the end of business on Thursday came and went without a deal, the title became vacated. IBF president Daryl People sent a letter to DiBella and George Gallegos, a lawyer representing Golden Boy, informing them the decision to strip Alvarez which ESPN obtained a copy that read as follows:

“It is crystal clear from the correspondence that on July 26, 2019, [Golden Boy matchmaker] Robert Diaz, on behalf of Golden Boy Promotions, agreed that Saul ‘Canelo’ Alvarez would relinquish the IBF middleweight championship title, with no further negotiations or purse bid, if there was no completed deal between him and Derevyanchenko by the agreed upon extended deadline of Monday, July 29, 2019, at 3 p.m. ET,” People wrote in the letter, “As of today, August 1, 2019, the IBF has been advised that there is no such deal.”

Canelo To Be Stripped By IBF, Derevyanchenko Talks Hit A Wall https://t.co/GxVa9ooAsE pic.twitter.com/PJJ8MAZb0x

While they weren’t able to come to terms with Derevyanchenko, one thing for certain is the trilogy fight with Gennadiy “GGG” Golovkin is still not an option. Jake Donovan of Boxingscene.com confirmed in his report of the stripped title that their sources with knowledge of negotiations informed BoxingScene.com that such a request no longer existed by the tail end of negotiations. In fact, all had declined to comment on or off-the-record if it helped push along talks between the two camps as far as it lasted.

With no third fight with GGG and no contest with Derevyanchenko, the next step in who wants to fight Canelo rollercoaster will fall to WBO titleholder Demetrius Andrade.  The ESPN report had hinted that those talks of that were taking place. Since Alvarez had not alerted the IBF ahead of time of the proceedings, their mandatory took precedent causing them to take the title away from him.

So with the IBF belt vacant, it confirms my belief now that this will give Derevyanchenko a chance to take on the number three IBF contender who happens to be Golovkin. Mike “Copp” Coppinger confirmed that in a source to him in the Athletic on Thursday.

Sources: There’s no deal yet between GGG and Sergey Derevyanchenko, but it’s expected one will be completed soon. They’ll vie for the IBF middleweight vacated by Canelo once a deal is signed

So after all the delays and hoopla leading up to this, we have once the smoke clears what should’ve happened to begin with. Alvarez still has a possible unification bout with Andrade, who’s been calling him out since his victory over Maciej Sulecki in June. Golovkin meanwhile, has a title shot the vacant IBF belt against Derevyanchenko. If Golovkin can win against Derevyanchenko, this will all but make a formality to boxing fans getting the third fight between him and Canelo Alvarez without all of these semantics.