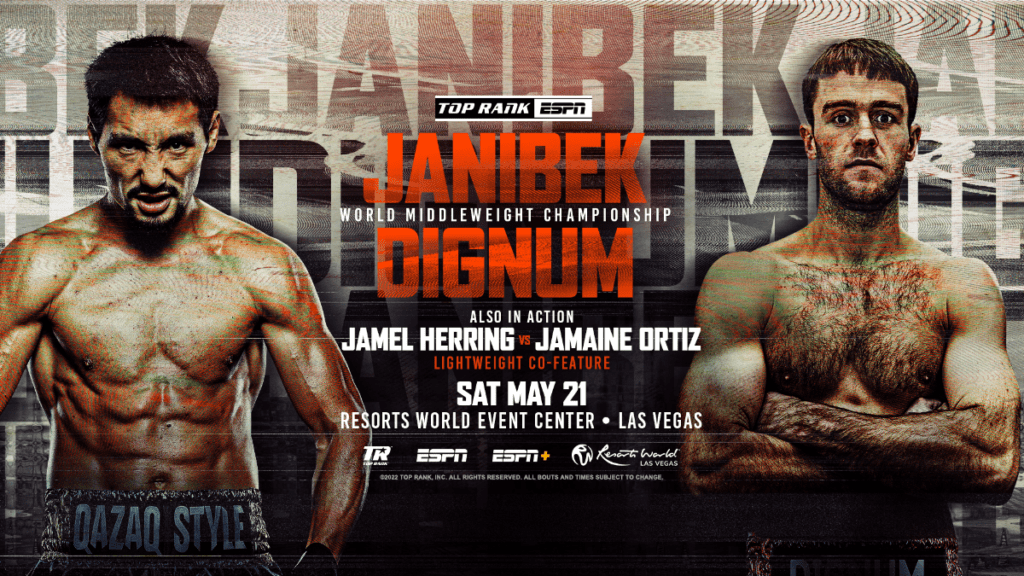 Top Rank on Monday made official its event on May 21 (ESPN/ESPN Deportes/ESPN+), which, as expected, will be headlined by Janibek Alimkhanuly against Danny Dignum for the vacant WBO interim middleweight title at Resorts World Las Vegas.

“Janibek is a special talent, one of the very best to come from Eastern Europe in recent years,” Top Rank chairman Bob Arum said. “He’s getting the platform he deserves — a Las Vegas main event on ESPN — and I expect him to look sensational against a tough Englishman like Danny Dignum. Janibek has everything it takes to reign as middleweight world champion for a very long time.”

Alimkhanuly (11-0, 7 KOs), 28, a 2016 Olympian Kazakhstan fighting out of Oxnard, California, and fellow southpaw Dignum (14-0-1, 8 KOs), 29, of England, will vie for the interim belt while full titleholder Demetrius Andrade is moving up to face Zach Parker for the vacant WBO interim super middleweight belt. If Andrade wins, he will have to decide whether to remain at 168 pounds or return to 160 and defend against the Alimkhanuly-Dignum winner.

“Demetrius Andrade and Jaime Munguia avoided fighting me, so I give Danny Dignum a lot of credit for stepping up to the plate,” Alimkhanuly said. “While the division’s top names are avoiding me, they won’t be able to run forever.”

Dignum will be boxing outside of England for the first time.

“I am absolutely buzzing to be fighting Janibek for the WBO interim middleweight world title,” he said. “It’s a dream come true to be headlining a show in Las Vegas. All the sacrifice over the years has been worth it to get to this point. I’m very confident in my ability and will be coming to Resorts World to win that title.”

In the 10-round co-feature, WBO junior lightweight titlist Jamel Herring is moving up to lightweight and will face Jamaine Ortiz (15-0-1, 8 KOs), 25, of Worcester, Massachusetts.

Herring (23-3, 11 KOs), 36, of Coram, New York, will be fighting for the first time since losing the his 130-pound belt by one-sided 10th-round knockout to Shakur Stevenson in October. The fight will also be Herring’s first since parting ways with trainer Brian McIntyre to work with Manny Robles.

“I’m happy to be back, starting the new year with a fresh start,” Herring said. “A lot has changed since I was last in the ring. I am working with a new trainer, Manny Robles, and returning to the lightweight division for this upcoming fight. I’m optimistic that a victory here will place me back in the title picture at either lightweight or junior lightweight.”

Herring defended his title three times before 2016 U.S. Olympic silver medalist and former WBO featherweight titlist Stevenson dethroned him in the in Atlanta.

Ortiz has won his only fight since an eight-round majority draw with Joseph Adorno last April and is taking a big step up against Herring.

“Jamel Herring is a tremendous fighter with an impeccable resume, and I have all the respect in the world for what he’s accomplished, but on May 21, he’s stepping into my ring in my weight class, and I will show him — and the entire world — why I’m the future at 135 pounds,” Ortiz said.