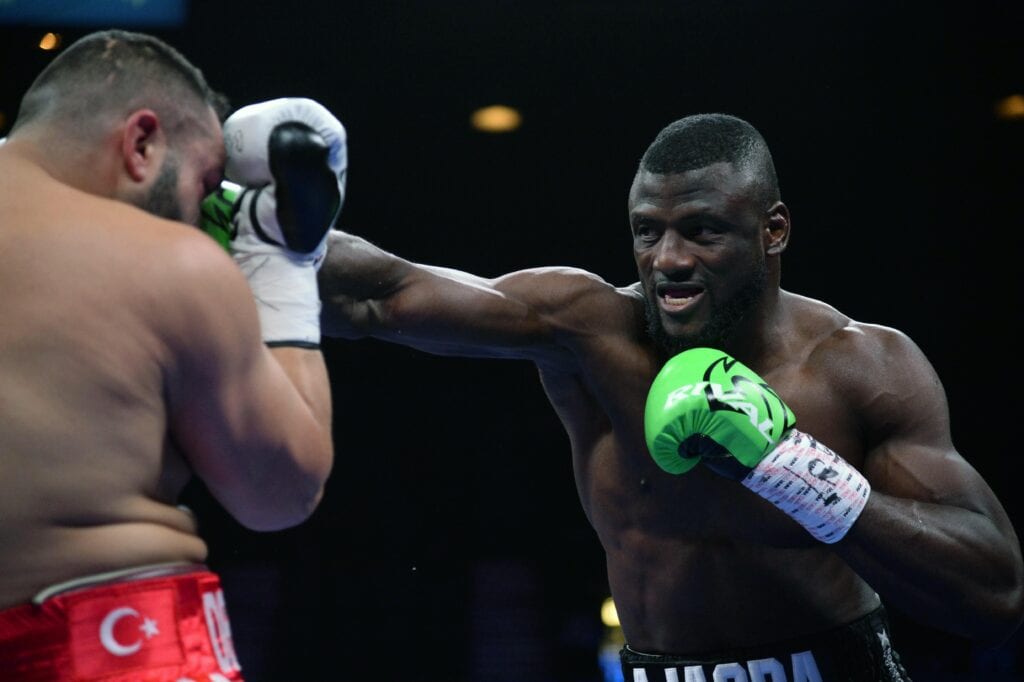 Ajagba in action on Kownacki-Helenius card

The night of heavyweight action begins at 8 p.m. ET/5 p.m. PT and is headlined by undefeated Polish star and Brooklyn native Adam Kownacki looking to thrill his hometown crowd when he takes on Robert Helenius in a 12-round WBA Heavyweight Title eliminator. The opening attraction will see rising heavyweight Frank Sánchez step in to face Philadelphia’s Joey Dawejko in a 10-round battle.

Tickets for the event, which is promoted by TGB Promotions, are on sale now and can be purchased at Ticketmaster.com and barclayscenter.com. Tickets are also available for purchase now at the American Express Box Office at Barclays Center.

Rounding out the action is heavyweight prospect Steven Torres (2-0, 2 KOs) in a four-round bout and the pro debut of Boston’s Francis Hogan in a four-round middleweight fight.

Nigeria’s Ajagba (12-0, 10 KOs) has increased his opposition in his recent fights and passed those tests by getting off the canvas to stop Iago Kiladze in December 2019 and defeating fellow 2016 Olympian Ali Eren Demirezen by 10-round unanimous decision in July, both on FOX. The 25-year-old Ajagba gained widespread notoriety in August 2018 when his opponent, Curtis Harper, walked out of the ring after touching gloves to start the first round. Ajagba won the fight without throwing a punch as Harper was disqualified. Living in Stafford, Texas and training with renowned veteran trainer Ronnie Shields, Ajagba will make his 2020 debut and third career appearance at Barclays Center on March 7, after four victories in 2019.

Born in Romania and now residing in Burbank, California, Cojanu (17-6, 9 KOs) most recently won a decision over Tamaz Zadishvili in October 2019. The 32-year-old has fought professionally since 2011 and rebounded from a defeat in his first pro fight to win 16 of his next 17 bouts. He defeated Zhiyu Wu in 2016 to earn a title fight against Joseph Parker, which he lost by decision in 2017. Cojanu would then go on to challenge top heavyweight contender Luis Ortiz, plus rising contenders Daniel Dubois and Nathan Gorman, in three straight fights from 2018 until his most recent triumph.

Brook-‘2020 I want to be two-time champion’
Who are the 10 better than Devin Haney?
Advertisement
To Top
We use cookies to ensure that we give you the best experience on our website. If you continue to use this site we will assume that you are happy with it.OkNoPrivacy policy