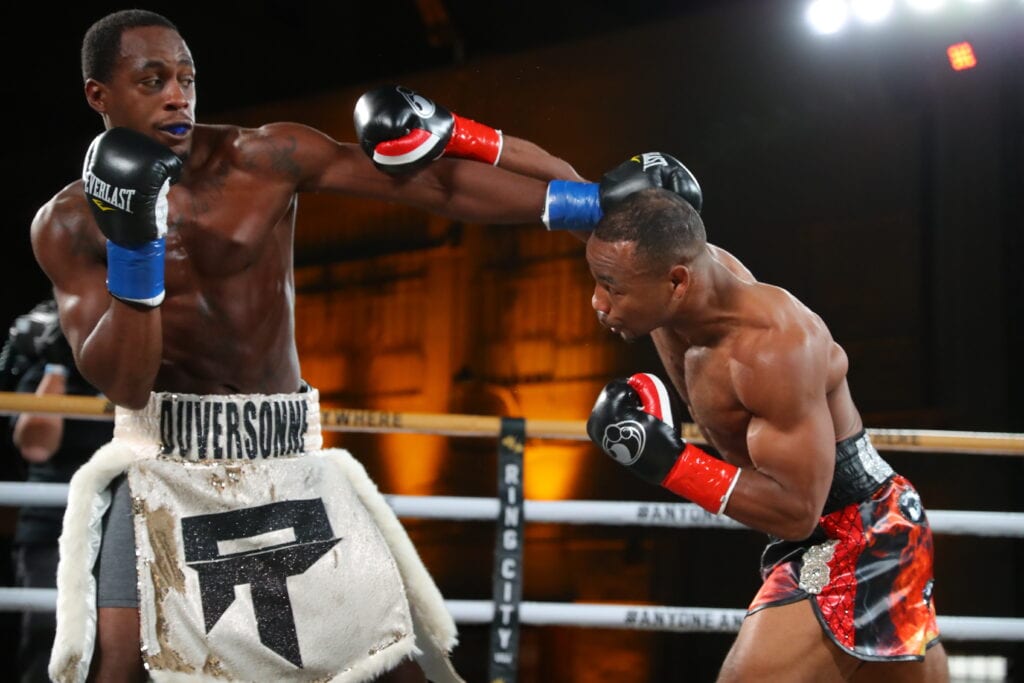 Junior middleweight Contender Brandon Adams didn’t let a last-minute change in opponent deter him on Thursday night, knocking out replacement opponent Sonny Duversonne one minute and 40 seconds in to the second round of the main event of Ring City USA’s Thursday night fight card from Wild Card Boxing Club in Los Angeles. The Dec. 3 fight night was the second of three Ring City fight nights taking place in 2020, with additional dates slated for 2021.

Both fighters came out active in the initial minutes, throwing a flurry of punches to work their way in close to the body. But Adams (22-3, 14 KO’s) had the upper hand from the initial minutes, honing a confidence in his punching power that was too much for Duversonne (11-3-2, 8 KO’s) to overcome. Adams made a statement during his first foray back into the ring 523 days after his last professional fight.

“It means a lot to me to fight again,” Adams told ringside reporter Curran Bhatia. “I’m grateful for the opportunity to be here fighting on one of the first Ring City cards and I’m super excited to fight here on NBC. I held up my end of the bargain to keep everyone excited to watch me fight here.”

Adams was initially scheduled to fight the fast-rising Serhii Bohachuk, who was forced to withdraw from the competition after testing positive for Covid-19. Duversonne committed to fighting Adams less than a week before the scheduled bout, but the shift in opponent didn’t interfere with Adams’s determination and focus.

“My game plan stayed the same from the beginning – to seek and destroy,” Adams continued. “I wanted to come out and win and it didn’t matter who was put in front of me.”

Duversonne stepped up to fight Adams after suffering two consecutive losses in October and November. While Adams’ experience and skill couldn’t be matched, the 30-year-old Duversonne threw himself into the challenge and came into the first round valiantly, employing an arsenal of combinations and diverse footwork.

“I congratulate [Brandon] for everything he’s done; He was the better man tonight and I have no excuses,” Duversonne said. “I started off slow tonight but it’s on to the next. My team and I are going back to the drawing board to fix everything and I’ll be back in the gym first thing next week.”

In co-feature action, Brian Ceballo (12-0, 6 KO’s) remained undefeated with a solid unanimous decision victory over Larry Gomez (10-2, 8 KO’s). Ceballo was dominant from the outset, relying heavily on his jab and a series of crisp combos to establish an advantage in the early rounds. The 26-year-old Ceballo, who has 206 amateur wins and is one of only three fighters to have won five New York Golden Gloves Championships, didn’t slow down his pace. Ceballo remained precise with his punches through the later rounds, using his jab to set up opportunities, and throwing big hooks when the opportunities presented themselves.

Gomez showed heart throughout. While Ceballo established early dominance with impressive conditioning and pressure, Gomez didn’t back down and kept up with the fast pace Ceballo set. He continued to make Ceballo work and earn the later rounds. But Ceballo’s quick adjustments, coupled with his fitness and quick feet, was too much for Gomez to overcome. The fight was scored 96-93, 98-91, 99-90 in favor of Ceballo.

In featured undercard action, Freddie Roach trainee Gor Yeritsyan (14-0, 12 KO’s) scored a tactical sixth-round knockout of Mahonri Montes (36-10-1, 25 KO’s). He secured his win at the top of the sixth round in a fight he dominated from start to finish. Yeritsyan came out aggressive, immediately establishing his place on the inside and keeping the pressure on Montes. Montes, who took a lot of punishment and was brutally cut up by the end of the fifth round, insisted on another round after referee Jack Reiss contemplated calling the fight. Reiss complied but ended the fight a few seconds into the sixth round.

Powerful Camacho Documentary As Much About His Killing As Boxing
Collard In Action On Stevenson-Clary Undercard
Advertisement
To Top
We use cookies to ensure that we give you the best experience on our website. If you continue to use this site we will assume that you are happy with it.OkPrivacy policy