James “Buster” Douglas on October 25, 1990 had his Cinderella story end to the hands of Evander Holyfield at the Mirage Hotel & Casino in Las Vegas, Nevada.

The story started with Douglas pulling off the unbelievable upset at the time as T.J. Rives has written here back in February of 1990 by beating Mike Tyson in Tokyo, Japan. While that victory was one for the record books, what transpired during for Douglas and his title reign as WBC,WBA,IBF and lineal champion he recalled was misery.

Speaking with ESPN recalling the championship run 2018, Douglas spoke about the rough patch he was enduring.

“Out of the first six months I retained the title, four months of it was going through all of that madness with the court case, all that yahoo,” said Douglas. “And then the last two months was trying to hurry up, get ready to defend the title.”

The court case was due to Douglas filing a lawsuit to break his promotional contract with his promoter Don King. Douglas in-turn signed a conditional contract to make his first title defense at The Mirage Hotel and Casino in Las Vegas, Nevada. Douglas claimed that King breached their contract when he tried to have Douglas’ win against Tyson overturned.

An out of court settlement gave King the right to promote a Douglas-Tyson rematch, but Douglas would first defend against Holyfield at The Mirage, a promotion in which King would have no direct pecuniary interest. That interest would go to Steve Wynn, then owner of The Mirage, who cut out the middlemen and promoted the fight himself.

To say that Wynn put some money down on this fight for Douglas-Holyfield is an understatement as Wynn outbid the right to promote the fight by winning a purse bid of $32,100,000, beating out Main Events (Holyfield’s promoter at the time), who bid $29,101,000. The Mirage’s bid is still the largest winning purse bid of all time. 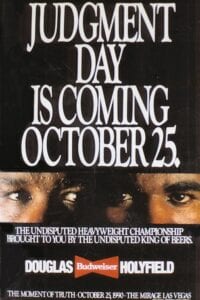 On the other end the challenger Holyfield, who at the time was the #1 contender by all boxing sanctioning bodies was preparing to face Tyson on June 18, 1990. This was interrupted by Douglas mentioned above.

Holyfield came in the huge favorite and once the weigh in came in became a bigger one as Douglas came in out of shape. At the official weigh-in, Douglas weighed 246 lbs, 14½ more than his weight for the Tyson fight.

“Roll him in and carry him out,” said Lou Duva, co-trainer of Holyfield, who came in at a 208 pounds. Mirage Casino oddsmaker Jimmy Vaccaro said there was a mad rush to the sports book after the weigh-in. “Over $150,000 was bet in one hour, and 90 percent of it was bet on Holyfield,” he said. Holyfield had been as much as a 12-5 favorite. The odds went down to 7-5, but after the weigh-in, went up to 9-5.

Once the bell rang, it was very apperant that Douglas was not long for the contest against Holyfield. Holyfield  had controlled the first two rounds. Holyfield was also more active as he landed 66 of 100 punches, while Douglas landed 20 of 69. In the third round and final, Holyfield feinted with a left and Douglas threw a right uppercut lead. Holyfield stepped back and threw a right cross, catching Douglas on the chin. Douglas went down, landing hard on his left side. Douglas showed no vision of getting up. Douglas wiped his face with his gloves, checking for blood, then rolled over onto his back in a seal-like state and took the referee Mills Lane count of ten, ending his title reign.

This noncompetitive effort by Douglas earned him over $24,075,000, but the criticism and scorn for the performance from everyone around him had him retire from the sport for over five years. Douglas had health issues as he ballooned to roughly 400 lbs, his blood-sugar count went up to 800, and he went into a diabetic coma during this time off as well. He slowly rebounded and got back into shape and returned to the ring in 1996 before finally retiring in 1999.

Feel free to revisit the match up which made Holyfield “The Real Deal” on this day he became champion putting a halt to the Cinderella story of one of bocing’s biggest upsets.