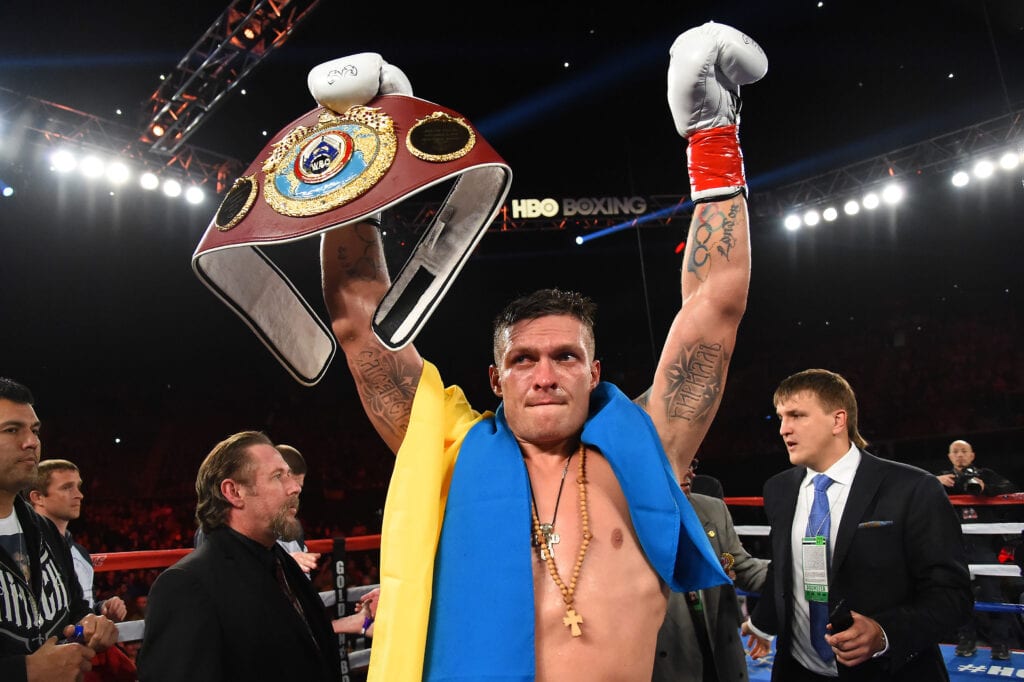 Early Friday, Matchroom Boxing announced that Pound-for-pound star Oleksandr Usyk will make his Heavyweight debut against Carlos Takam at the MGM National Harbor in Oxon Hill, Maryland on Saturday May 25, live on DAZN in the US and on Sky Sports in the UK.

Usyk (16-0 12KOs) was the dominant force in the Cruiserweight division over the last 18 months, culminating with his commanding win over Murat Gassiev in July to become the undisputed world champion and the winner of the inaugural World Boxing Super Series tournament in Gassiev’s Moscow home.

Usyk left the division in style in November in Manchester where he KO’d Tony Bellew in the eighth round of their clash – a seventh straight World title triumph on the road for the 2012 Olympic gold medalist.

“May 25 marks a major moment in my career when I move to the Heavyweight division,” said Usyk in a press release. “At Cruiserweight, I did it all and became the undisputed champion and that is my goal now in the Heavyweights.

“This is the ultimate challenge and it begins on May 25 against Carlos Takam. It’s a tough first fight but I need to test myself against World class opposition on my new road to undisputed.”

The 32-year-old’s bid to win World titles at Heavyweight will begin against the battle-tested French-Cameroonian Takam (36-5-1 28KOs). Takam challenged Anthony Joshua for the IBF, WBA and IBO World titles in Cardiff, Wales in October 2017, taking Joshua ten rounds before being stopped, and recently starred in a fight of the year contender with Dereck Chisora at The O2 in London, England in July 2018 before being stopped in that one as well. His last win was against Senad Gashi by stoppage in December.

“Usyk has achieved everything in the Cruiserweight division – I am ready to welcome him to the new world of Heavyweight boxing,” said Takam. “I can promise that this will be a great fight and I will provide Usyk with a huge test on his Heavyweight debut. I have huge ambitions of my own in the division and this fight will provide me with the chance to prove that.”