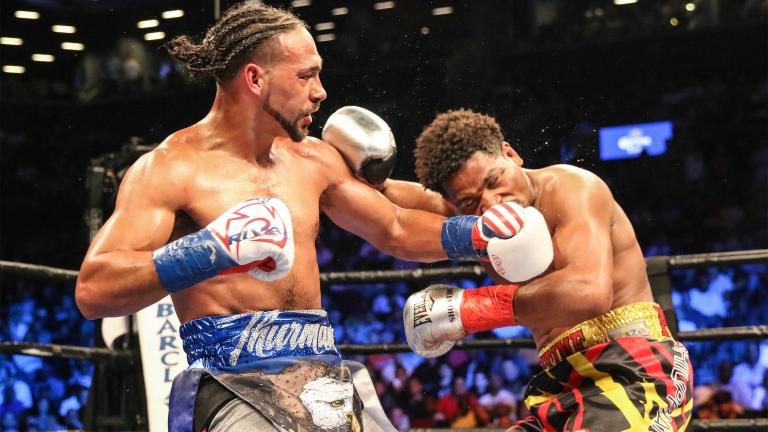 One of the great historical aspects of boxing is that fighters have always welcomed a rematch, or even a third fight, if desire for all involved is there. Whether it was Ali-Frazier, Leonard-Duran, or the present day battles of Tyson-Holyfield, Gatti-Ward, etc., etc., we love to see fights a second or a third time.

With that in mind, here are three of them that seem logical (then again, it’s boxing) and have a lot reasons why they should happen, and soon.

With Keith Thurman back from injury having won his January comeback fight title defense over Josesito Lopez, he’s now looking to attempt to unify the Welterweight titles. And, the most logical next step is to fight Shawn Porter, who holds the WBC belt and is under the same promotional umbrella of Haymon Boxing and PBC.

Porter is defending his championship on Saturday March 9th against Yordenis Ugas, and should the favored Porter win, a rematch with Thurman for their belts would be in his best interest, as well. And, depending on how hard fought the Ugas fight is for Porter, both fighters could be ready for late this summer or in the early fall.

Thurman and Porter fought a hotly-contested 12 round battle in Brooklyn, NY, in March of 2016 that had great action with big punches, and PBC dubbed it their “2016 Fight of the Year.”

Thurman got the nod with a narrow unanimous decision to remain unbeaten.

It’s going to be an obvious obstacle for either Thurman or Porter to be able to fight fellow 147 lbs. champ, Terence Crawford, as he’s under the Bob arum Top Rank promotion.

So, in the meantime, the two of them would be well-served by getting back in the ring to have another exciting fight against each other, and it’s easily “sell-able” to the public.

With all of the recent public negotiating going on about the Wilder-Fury rematch, once again, it’s the fans  who lose out. It was a tremendous battle last December at Staples Center in L.A., as Tyson Fury shocked everyone (and probably even himself) with how well he performed after basically three years away from the sport and being horribly out of shape during that time.

Fury controlled the action, but Deontay Wilder landed the more significant punches, including almost knocking out Fury in the final minute of the fight. The 12 round draw left everyone dissatisfied, obviously.

The key in this situation is Wilder.

If he no longer wants to sign a multi-fight deal with Haymon Boxing and PBC, he’s obviously free to jump over to Bob Arum and Top Rank. And, Arum, who already locked up Fury last week to complicate this rematch, has guaranteed Wilder that he can get Fury again later this year.

If however, Wilder is going to remain loyal to PBC, who built him up and lined his pockets fighting in some cases, less than attractive contenders on Showtime, then the rematch with Fury seems like next to impossible for this year.

And, further, it may be Wilder’s desire to go for the ultimate prize and try to unify the belts by fighting Anthony Joshua. Then, if victorious, look to battle Fury somewhere else down the road, a year or more from now. And, in that case, Wilder would have all the titles and all the leverage to dictate to Arum/Top Rank.

Still, fans and observers alike would love to see this matchup of two huge men throwing big punches to settle their draw happen. And, it still might in 2019

This one seems the most likely on our list. They fought two entertaining fights previously, and Alvarez handed “Triple G” the only loss of his career in their second meeting last September. Of course the reason for the second meeting was: the controversy over the draw that many observers and fans felt was unjust to Golovkin in fight number one.

Alvarez benefitted from that draw and got his second fight with Golovkin.

Now, Genady Golovkin wants “his rematch” and while he is 36, make no mistake, the deal that he’s apparently doing with DAZN (who already has Canelo under a 10 fight contract) is designed to set it up this rematch with Alvarez for one last big showdown.

Should Alvarez win over Daniel Jacobs on May 4th, look for Golovkin to fight someone beatable soon after on DAZN. Then, the two of them could meet this winter for the third in the trilogy.

And that too, is a fight that most would want to see.