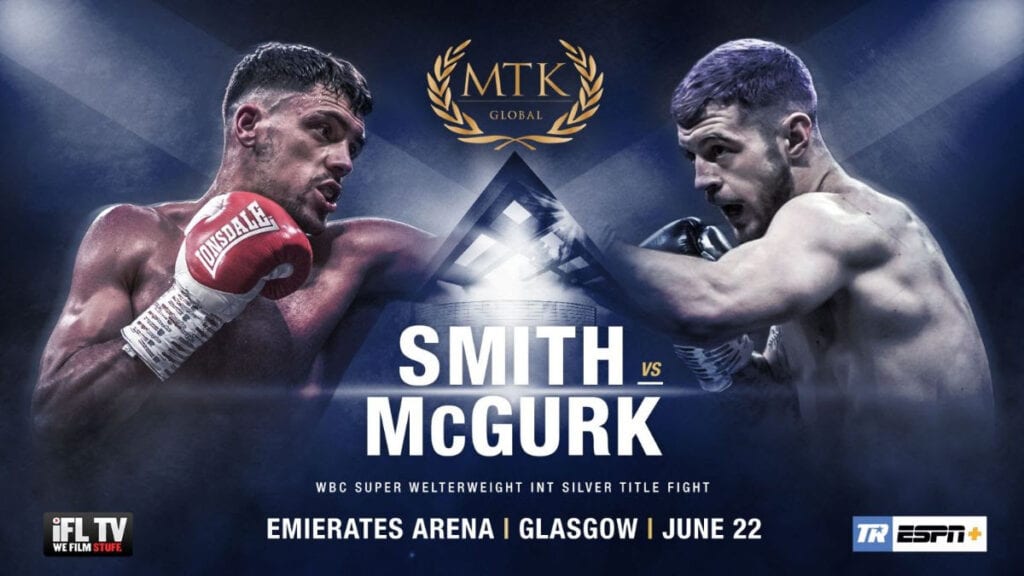 Undefeated Scots are the feature as Greenrigg’s southpaw Kieran Smith puts his belt on the line against Uddingston’s fighter Michael McGurk at Emirates Arena in front of a worldwide TV audience.

The bout is for Smith’s WBC International Silver super-welterweight title in Glasgow on June 22 and is in association with Top Rank and live on the streaming service  ESPN+. The main event of this MTK Fight Night will be announced at a later time.  The undercard for this fight night coming from Scotland will also be streamed on iFL TV.

Smith (14-0, 7 KOs), who stopped Jan Balog at the same venue back in March,is taking a step up for him in competition with the match against McGuirk.

Smith said in the press release, “It’s a massive fight with it being on Glasgow and ESPN+, and it’s a great fight that offers both of us the chance to progress.

“The loser can still come back as we’re both young, but I’m looking to be the man progressing on the night.”

“I knew our paths would cross at some stage but I didn’t know when or where, so I’m really happy that the fight is on and I can’t wait until June 22.”

McGurk stated in the press release, “I’m delighted to get this fight. It’s one I’ve wanted for a while now so I’m buzzing for it, especially on such a big show in Glasgow, so you’ll hear my supporters for sure. Fighting live on ESPN+ is unbelievable too.”

“I thought the fight would happen eventually but I didn’t think it would happen so soon. I’m glad MTK Global has come up with the goods.”

Palicte to battle in Osaka against Ioka
Wilder-Breazeale undercard to feature Gary Russell Jr
Advertisement
To Top
We use cookies to ensure that we give you the best experience on our website. If you continue to use this site we will assume that you are happy with it.Ok