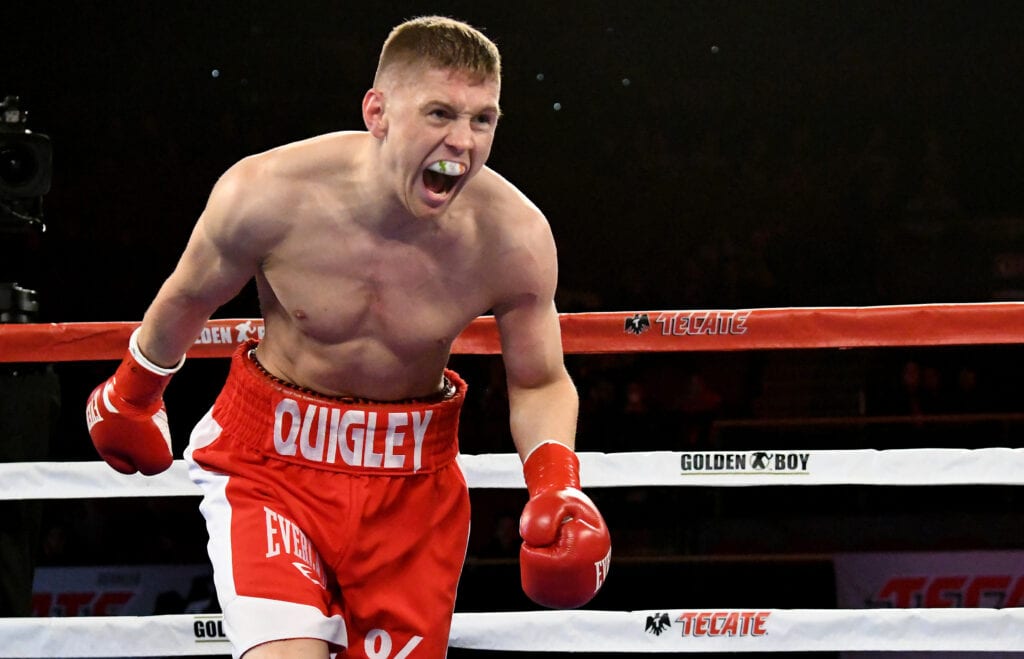 Undefeated Irish contender Jason Quigley (16-0, 12 KOs) will return to the ring to defend his NABF Middleweight Title against battle-tested Tureano Johnson (20-2-1, 14 KOs) in the 10-round main event of the July 18 edition of the Golden Boy DAZN Thursday Night Fights at Fantasy Springs Casino in Indio, Calif. The fights will be streamed live on Facebook Watch via the Golden Boy Fight Night Page beginning at 10:00 p.m. ET/7:00 p.m. PT. The series will also be available on regional sports networks around the nation.

Tickets on sale next Friday! pic.twitter.com/hX0gdklH7x

Quigley is a 28-year-old contender who has an unblemished record after turning professional in 2014. The native of Donegal, Ireland has defeated the likes of James “The King” De La Rosa, Glen “Jersey Boy” Tapia, and Freddy “El Riel” Hernandez. In his last fight, Quigley fought for the first time in the U.K. since moving to the United States to start his professional career. In that fight, Quigley defeated Mathias Eklund via second-round technical knockout. After a year-long setback due to an injury suffered in his right hand against Tapia, Quigley has been making a comeback and is eager for a world title shot.

“I’m excited because getting in the ring with these good fighters is going to make me perform even better,” said Jason Quigley in a press release. “This is going to be a massive year for me so I’m looking to putting on a great performance. We are focused on climbing the middleweight ladder, and we’re on the road now to world titles. That makes me excited. Tureano Johnson is a great fighter. He’s a tall fighter, and he’s got the repertoire and the armory. I’m expecting a tough fight, and I hope he comes 110% prepared because I’m going to be 110% prepared.”


Johnson is a 35-year-old contender who hopes to fight for a world title despite some setbacks in his career. Johnson’s only losses were against Curtis “The Cerebral Assassin” Stevens and Sergiy “The Technician” Derevyanchenko. After a very tough battle against Fernando “El Huracan” Castaneda in February, the native of Nassau, Bahamas is eager to make his case for a world title opportunity by handing Quigley his first loss.

“I am very excited to have the opportunity to fight Jason Quigley for the NABF Middleweight Championship on July 18 in Indio, California,” said Tureano Johnson to the media. “Quigley is an excellent boxer with an excellent record, but I will come to the fight prepared to give and to take. I will give him his first loss and take his NABF Championship.”

In the co-main event, Alberto “Impacto” Melian (5-0, 3 KOs) of Buenos Aires, Argentina will defend his NABA Super Bantamweight Title in a 10-round fight against Leonardo Baez (14-2, 8 KOs) of Mexicali, Mexico.

Marlen Esparza (6-0, 1 KO) of Houston, Texas will fight in an eight-round flyweight fight.