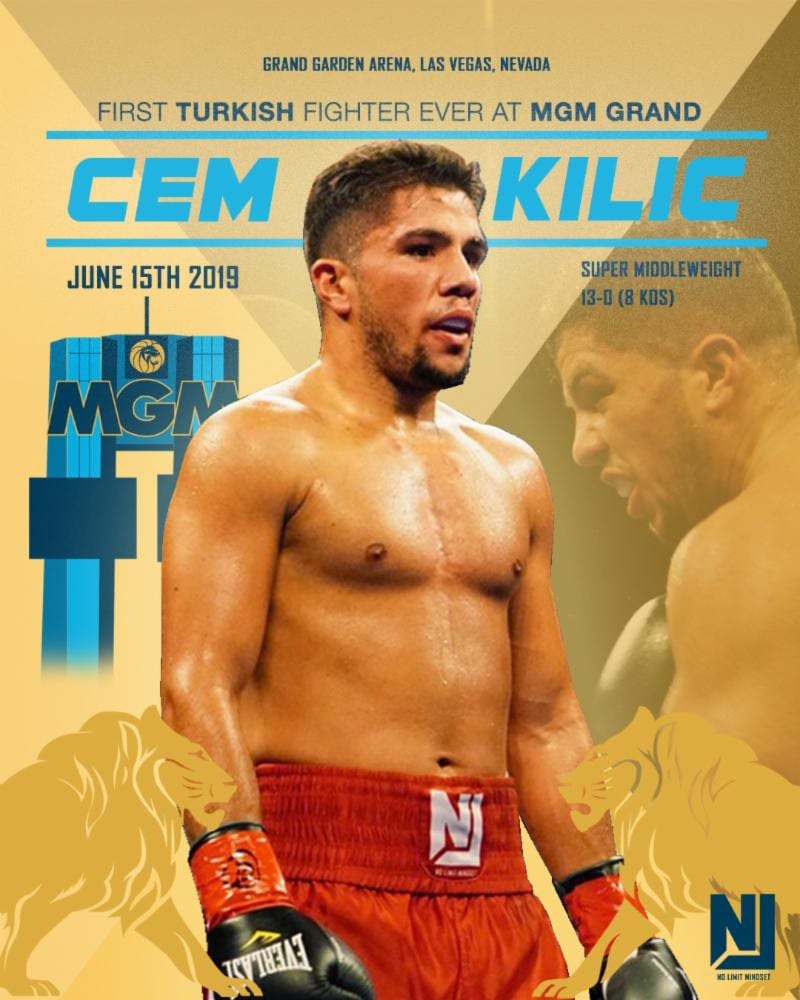 Undefeated super middleweight Cem Kilic will look to take another step towards the world rankings when he takes on Martez McGregor on Saturday, June 15th at The MGM Grand in Las Vegas.

The fight will be part of the Tyson Fury-Tom Schwarz undercard that will be seen on ESPN 2 starting at 7 p.m.

Kilic will make history as the 1st ever fighter from Turkey to fight at The MGM Grand.

Kilic of Frankfort, Germany, who now calls Los Angeles, California home, has a record of 13-0 with eight knockouts.

The 24-year-old Kilic has upped his resume and reputation thanks to wins over Jerhed Fenderson (1-0), Joe Amouta (7-1-1), and a nationally televised win over DeAndre Ware (12-0-2).  In his last bout, Kilic stopped Zacariah Kelly in two rounds on February 15th in Hinckley, Minnesota.

“I have had a great training camp for this fight with my head trainer Buddy McGirt,” said Kilic in a press release. “I have been sparring with Sergey Kovalev for the last month, and I am in the best shape of my life. I am excited to showcase my talent on June 15th, and to make history as the first fighter from Turkey to fight at the MGM Grand! Big thanks to my manager Shane Shapiro and my promoter Greg Cohen for getting me this opportunity.”

“Cem is really peaking at the right time of his career. While this is only his 14th pro fight, being in training camps the last four years with legendary fighters like Miguel Cotto, Shane Mosley, Sergey Kovalev, Jermell Charlo, and Errol Spence Jr. has helped him develop into a fighter well beyond 13 fights on his professional record. I am anxious for the world to see Cem Kilic live on ESPN 2 come June 15th,” said Shane Shapiro of No Limit Mindset LLC in a press release”.

McGregor of Chicago. has a record of 8-1 with six knockouts.

The 28 year-old McGregor has a win of previously undefeated Luis Jimenez (3-0). McGregor has won five in a row, which includes his last bout, when he stopped David Mason in the 1st round on February 22nd in Elk Grove, Illinois.