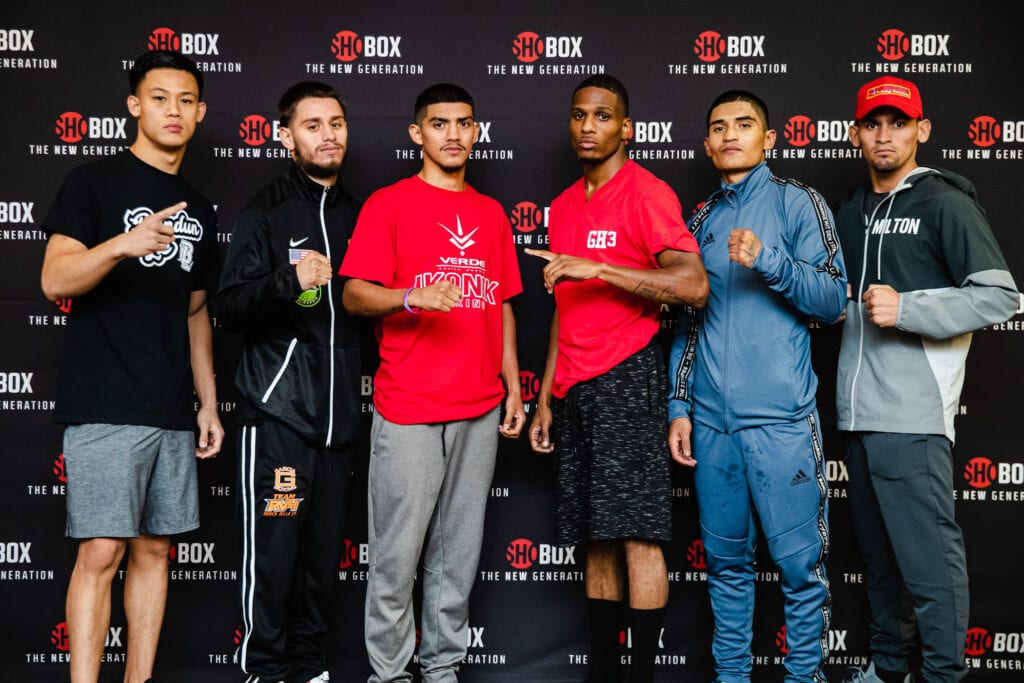 The La Hacienda Event Center in Midland, Texas was the site Friday night for the latest edition of ShoBox: The Next Generation card on Showtime. What transpired was a card that was a solid night of boxing up and down.

The one match that didn’t make the broadcast was the second pro fight of Vito Mielnicki who improves to 2-0 after making quick work of Caleb Bailey. The fine folks at FighterIQ were on hand to record all 50 seconds of the 17-year-old in action.

The broadcast portion of the Shobox card didn’t start too much longer but was an impressive one for Brandun Lee. The 20-year-old Lee improved his record to 17-0 with 15 knockouts by adding and second-round stoppage here of Milton Arauz. Lee, in this one, came out firing and it led to the second round, where he hit Arauz (10-2-1, 5 KOs) with a vicious right to send him to the canvas. Arauz tried to get up but stumbled, causing referee Daniel Sandoval to halt this one at 2:59 of the second round.

The second Bout on the ShoBox card has a few hiccups, but in the end, Ruben Villa was able to outbox and defeat Enrique Vivas by a vast majority decision.  Villa (17-0,5 KOs) won on all three scorecards 100-89, which included a knockdown of Vivas (17-1, 9 KOs) in the second round that included what seemed an additional minute of in-ring action. Also in this match was an 11-minute delay to fix a snapped second rope in the ring before the sixth round began. None of this seemed to matter in the ring as Villa was thoroughly in control of this contest.

Villa sends Vivas to the canvas in Round 2. #ShoBox pic.twitter.com/IUhgr9Od32

The Shobox main event for this was a good one as well as local prospect Michael Dutchover taking on Thomas Mattice of Cleveland. This fight was a close and competitive one with plenty of back and forth action. All of that came to a sudden stopped in the eight-round, however. In that round, a punch by Mattice’s created a nasty cut above Dutchover’s left eye in the eighth round, which caused a ringside physician to approve a stoppage in their lightweight clash. Referee Robert Velez stopped their match at 1:33 of round eight.

Since a punch by Mattice started the gash on Dutchover, by rule it was considered a TKO victory for Mattice (15-1-1, 11 KOs). To the disappointment and rude awakening of the hometown hopeful for Dutchover(13-1, 10 KOs), they proceeded to toss trash and plastics into the ring at the ruling for a brief moment.  While the gash on Dutchover wasn’t good, it seemed while watching and to the broadcast crew that the fight possibly could’ve continued. Let’s hope the rematch for these two produces the same fireworks.

.@iamgunnaman puts on a gritty performance and wins via TKO after 8 rounds. #DutchoverMattice #ShoBox pic.twitter.com/Ci0f3XxOKg

Takam victorious over Lewis in Star Boxing Debut
Petr Petrov stops Bell on ‘Locked and Loaded’
Advertisement
To Top
We use cookies to ensure that we give you the best experience on our website. If you continue to use this site we will assume that you are happy with it.OkPrivacy policy